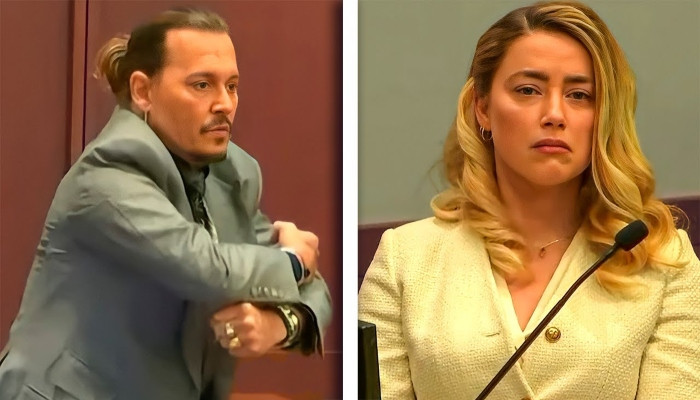 Amber Heard is currently locked in a bitter legal battle with her ex-husband Johnny Depp amid an unpleasant trend that has swept across TikTok ridiculing Heard’s testimony against Depp amassing millions of views online.

Variety reports that videos or audios from the trial see creators dramatically insulting the Aquaman actress, impersonating her, and even dancing to the same.

The portal quotes TikTok’s website and states that videos with the hashtag “amberturd” have been viewed more than 1.2 billion times to date.

Among the top viewed videos, was one belonging to sansanjovs, which features a mocking reenactment of Heard’s testimony. The video has received approximately 10 million views.

Another video featuring a cross-over between Heard’s emotional testimony and a clip of Kim Kardashian in a judge’s robe from a Saturday Night Live sketch racked up over 30 million views in five days. In the video, Kim says, “This makes me cringe. Guilty!”

Meanwhile, the social media platform, TikTok, has reportedly taken a step and removed numerous videos which they say violated their anti-bullying policies.

According to the report, TikTok’s Community Guidelines state in part that it prohibits ‘Content that disparages victims of violent tragedies.’ In addition, per the platform’s policies, “We remove expressions of abuse, including threats or degrading statements intended to mock, humiliate, embarrass, intimidate or hurt an individual.”

However, there are videos that excerpt audio and/or video from Heard’s testimony and use it in a disparaging way still remained on the platform Monday afternoon, states Variety.

Earlier, Heard broke down on the witness stand as she testified against her ex-husband and said that he sexually assaulted her with a liquor bottle and threatened her life shortly after they got hitched.

Depp, testified earlier in the trial that he never hit Heard and argued that she was the one who was the abuser.