Anthony Ramos, the 30-year-old actor and recording artist who’s well on his way to becoming a global superstar, always seems to be physically in motion. Whether dancing on stage in theater’s biggest hit in decades, acting onscreen in one of his more contemplative roles, or nailing choreography in Tommy Hilfiger campaign videos, for which he’s the latest face—he emits a crackling energy, a command of his own physicality that compliments the unpressed coolness of his personality. When he arrives at a stylist’s trailer in Midtown Manhattan on an uncharacteristically warm morning in mid-March, it’s apparent that his dynamism isn’t something he reserves for stage and screen. “Am I tripping with this big-ass coat?” he laughs, his big smile indicating he’s game and ready to crack jokes, as he is fitted for a range of crisp spring looks. 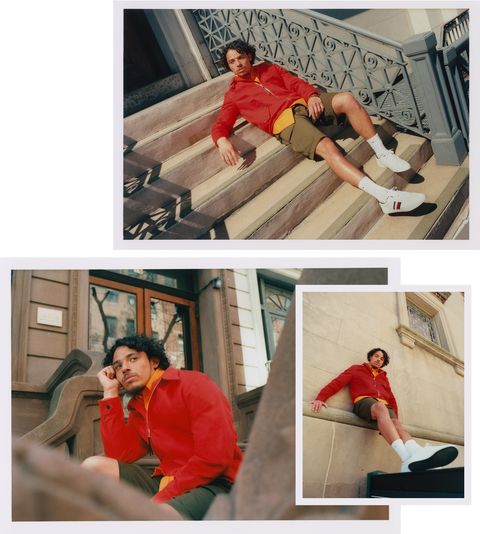 A freckled, chiseled livewire, Ramos has an appeal that’s quintessentially New York. It is quintessentially boricua, quintessentially the new generation. Speaking to him feels like shooting the shit with any number of my cousins or fellow Latinos on my block in Brooklyn, not far from Ramos’s neighborhood—quick, witty, but still regular, a man of the people. It is, in part, why Hollywood has taken to him so ravenously: he is real, in a way that a person can’t force. That down-to-earth, distinctly outer-borough quality has influenced some of the roles he’s landed, including a libidinous bike messenger in the series She’s Gotta Have It; a devoted best friend and drag bar acolyte in A Star is Born; and a rapping bodega owner with big dreams in the bigger-than-life, technicolor musical, In the Heights.

That’s such a mad cliché thing to say, but I feel like I’m walking my path for the first time in my life.

As he sits at the precipice of astronomical fame—with his second R&B-tinged album Love and Lies under his belt, and roles in two major franchises on the horizon—he’s circumspect about where he’s at right now. “I’m only doing the things in my life that I feel the most passionate about, that genuinely feel right,” he says, making eye contact through a mirror as his stylist grooms his signature curly coif. “That’s such a mad cliché thing to say, but I feel like I’m walking my path for the first time in my life. To be honest, this is the happiest I’ve ever been.”

Ramos was raised in the Hope Gardens public housing complex, in Bushwick, Brooklyn, where he lived with his mother, younger sister, and older brother, who’s ten years older and whom he considers a father figure. “From a young age, you don’t take things for granted, like getting your first bedroom,” he says—a feat he finally achieved at age 21 when his theater earnings were enough to rent an apartment in Central Harlem. Growing up, he said, “we had a little bit, so you had to make a little bit work. I use that in my life, and transferred it to my career now; always trying to get creative with what you have, whether you have a little or you have a lot.” 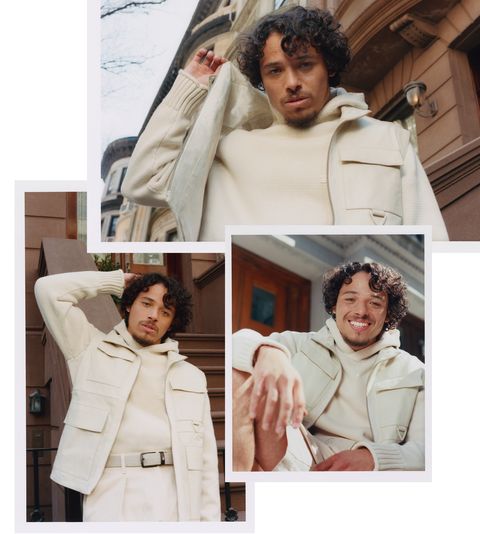 It’s been less than a decade since he landed his first big break on Broadway, but his career’s steep incline since hasn’t distracted from his clarity about his past or the future he’s stepping into. “I try to stay as tight with my family as possible, especially my mother—she’s always been that praying mom,” he says. “Sometimes it’s harder to do that than other times, but I always acknowledge that I need them.”

We’re not this thing that’s separate from the rest of the world. And now, more than ever, people are seeing that.

His love for family, and the way he expresses it, is something that reads as a culturally imperative value—to this Latina reporter, anyway. One of the most thrilling things about Ramos’s ascension is that he’s among a small but steady increase of Latinos dominating mainstream entertainment, industries that were dismissing or cordoning them off even just a few years ago. “Growing up, I didn’t see Latinos dancing in ads unless they were Spanish ads. We’re so layered, we’re so many things, but it was very hard for people in the States to see Latin people,” Ramos says. “We’re not this thing that’s separate from the rest of the world. And now, more than ever, people are seeing that, people are acknowledging that, and that’s why I think the Latino takeover is crazy right now.” 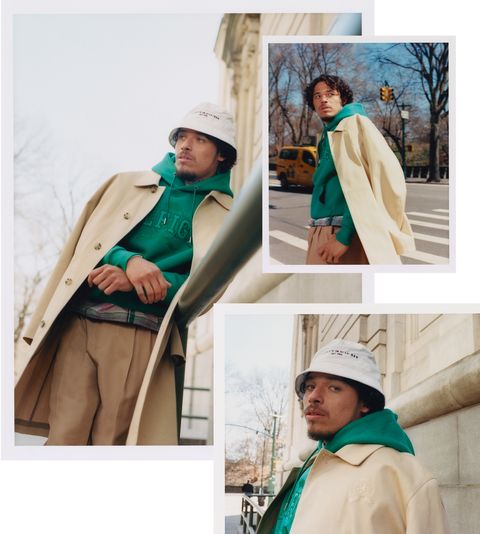 But of course, it’s not just Latinos—Millennials and Zoomers are more demographically diverse than ever, and that is, thankfully, being reflected in all types of media, slowly but surely. “We have the opportunity to really explore for real now. Wherever you came up, wherever your family’s from, insert that into what you’re doing. You don’t have to try to fit a mold—there’s literally no mold,” says Ramos, excitedly. “Whether you sing in patois, you sing in Spanish, you sing in English and Spanish—whatever, it doesn’t matter, just do whatever feels authentic to you. There’s now a place for it. There’s no ceiling. You can upload the shit yourself.”

There’s an almost endless supply of exposure to culture, and you gotta catch up, you gotta get with it.

Ramos’s career choices reflect the global sensibilities of the new generation—from his omnivorous music down to his latest Tommy Hilfiger spot, the Spring 2022 “Make Your Move” campaign which features models like Soo Joo Park, Luka Sabbat, and Georgia Palmer dripped in pristine beige and pastel pink varsity wear in modern prep styles and relaxed silhouettes. It’s a reminder to everyone that the truest form of Americana is cosmopolitan; an ideal where differences are celebrated. As someone who understands from whence he came, Ramos knows that success goes beyond mere representation, that it’s about true acceptance: not just diversity, but inclusion. “This is the beauty of [it]. There’s an almost endless supply of exposure to culture, and you gotta catch up, you gotta get with it,” he says. “That’s a fact.”