I’ve been driving the same piece of garbage Jeep since 2008. I named her Barbara Ann, and I hate her. She has a broken sunroof that leaks water into the electrical system whenever it rains, causing the windshield wipers, radio, and car alarm to go off until the battery dies.

Once in West Virginia in 2011, a one-eyed WalMart security guard paged me to the front of the store to tell me my car was “possessed.” I walked out outside with him and saw that sure enough, Barbara Ann’s lights were blinking on and off in rapid succession while a muffled version of Rihanna’s “Please Don’t Stop the Music” thumped loudly from her shitty speakers. She appeared high as hell on club drugs.

It’s surely clear to you that I am not a person who loves cars. Others covet them, even collect them, like Beanie Babies or stamps. They fly all over the world to attend shows featuring lots of cars that to my untrained eye all look like the Batmobile. It’s all great, I’m just not one of them. So did it make any sense that on a recent gorgeous afternoon in the Hamptons, I had the distinct and completely undeserved privilege to attend such an event? Not remotely, but I did anyway, and it was glorious.

The Bridge is an annual, invite-only car show that takes place on a private golf course in Bridgehampton, New York. The course itself is a stunner with 18 holes that weave between long stretches of winding road. (The design honors the course’s former life as the Bridehampton Race Circuit.) This year’s show was the largest in The Bridge’s six-year history, with 330 cars scattered along the course’s greens and fairways, and in some cases, parked in the sand traps.

Many of the attendees told me the show was a car lover’s dream come true. A B-list actor who is an A-lister in my heart remarked to me that it was more like a golf lover’s worst nightmare. As a passionate napper, I was most taken by the Hastens bed, which was set up as a lounge next to the oyster station. (Yes, of course there was an oyster station. Free snacks are the reason I go to events.) Hastens beds can cost anywhere between $30,000 and $500,000, which incidentally is 500,000 times more than my car is worth, but about the average value of the cars on display at The Bridge. But we were not there for the bed or the oysters. We were there for the most ridiculously nice cars on the planet. See for yourself in the photos below. 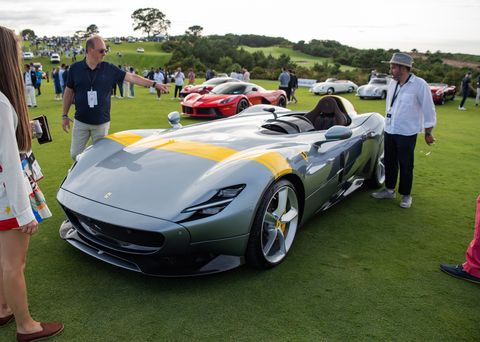 This is the Ferrari Monza SP1. It costs more than one million dollars. When I asked why the car was so expensive, the man pointing said, “You have to be invited to buy it.” There are only 499 of them in the world. 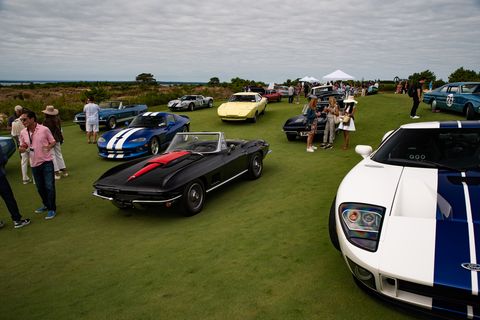 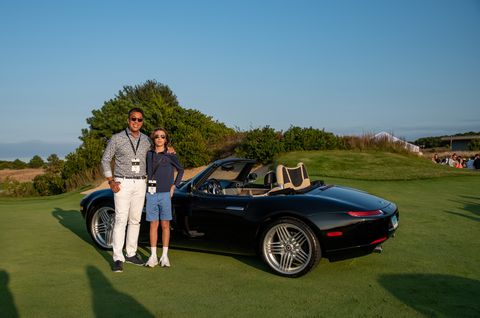 Attendee Tom and his son, Cameron, with their BMW Z8 Alpina. The car originally belonged to Tom’s late father. He purchased it in 2008, ultimately choosing it over the Ferrari 612 Scaglietti. “My Dad was a car guy,” Tom said. “We’re both car collectors.” The two were very close and worked together in the family business. “This was one of his pride and joys so I’m happy to carry on his legacy.”Tom’s son, Cameron, is also a car buff. “He knows more about cars than I do,” said Tom. The BMW Z8 was James Bonds’ wheels of choice in the 1999 filmThe World Is Not Enough. 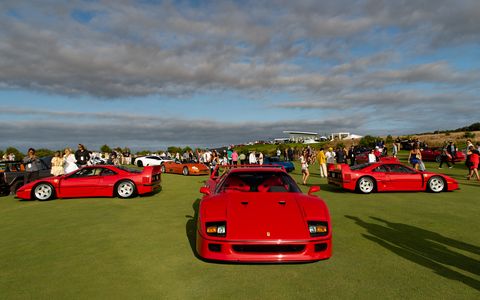 A trio of Ferrari F40S 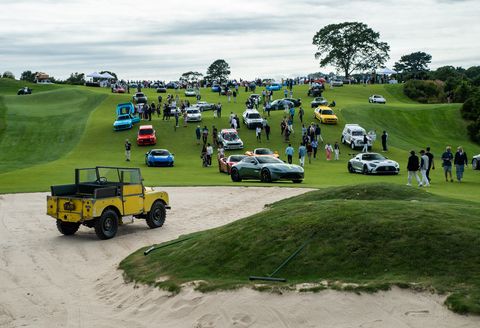 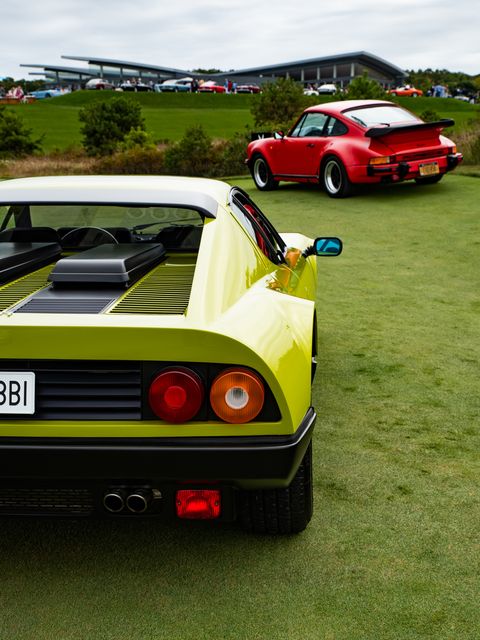 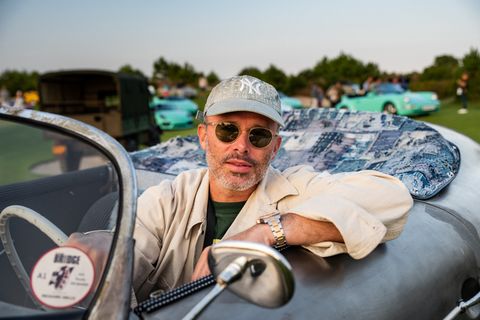 “It’s an original 1955 Speedster that was restored, but it wasn’t a great restoration,” said the car owner and artist, Daniel Arsham (pictured in his vehicle). So Arsham took the car to a restoration specialist in California who stripped past the car’s previous black and red finishes and took it all the way down to the bare metal, fully intending to repaint it. That’s when Arsham made an odd request. “I saw the finish and said, ‘what if we left it like that?” he recalled. Inspired by the time he’d spent in Japan and a pottery practice known as kintsugi, in which potters put broken pottery pieces back together with gold, Arsham said he wanted to embrace the car’s imperfections. The soft top is made from scraps of recycled denim that’s been hand-stitched back together. To complete his vision, Arsham sourced original, “unrestored” parts for the car. 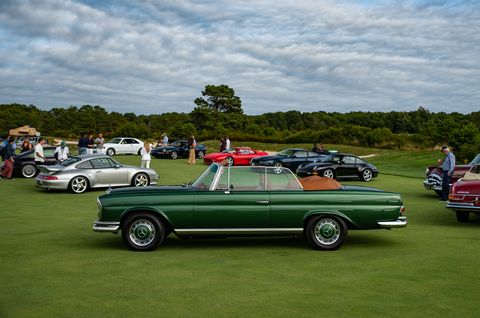 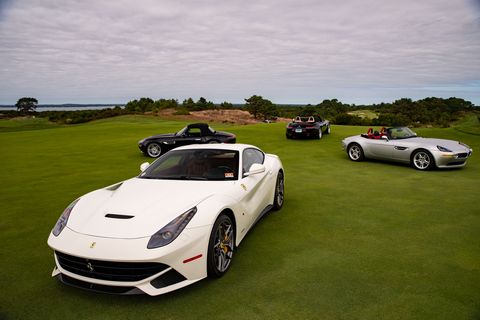 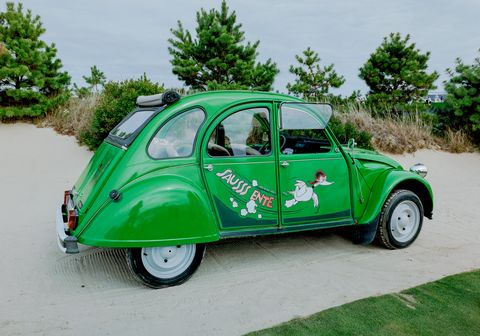 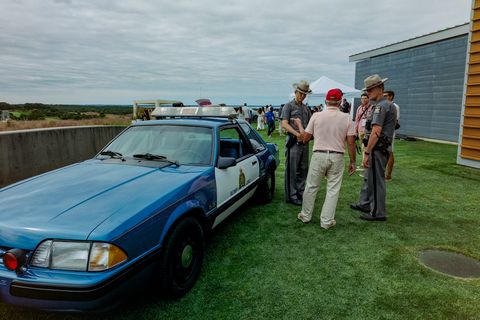 The Ford Mustang SSP. The model pictured here was designed for The Royal Canadian Mounted Police.

The robin’s egg blue interior of the c1 corvette convertible. 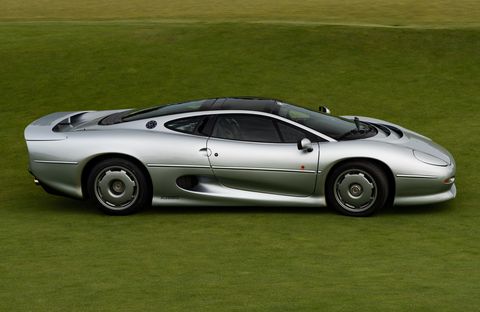 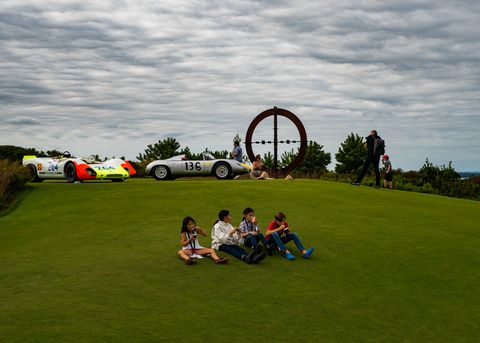 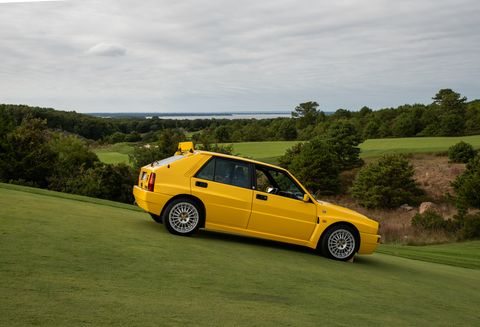 The author of this article with her favorite car at the show, a 1964 Alfa Romeo 2600 Spider, the same kind her late father drove.