Benjamin Bratt, 58, reflects on the generous lessons passed down from his mother’s abuela, Petronila “Petra” Calderon Tejada, and, now, his own mother, Eldy Bratt, as she is the matriarch of his extended family.

My mom is foundational to everything me and my siblings and our kids know and understand about family. What’s a little surprising is where she learned that. She comes from a pretty fractured immediate family in Peru. At a very early age, she became a ward of her paternal grandmother, Petra—so, she did not learn how to be an amazing mother from her own mother. She honed her notion of what positive, reinforcing, loving maternalistic qualities are from Petra. And not only did she then employ those qualities and approaches to life in raising us, she’s now doing it tenfold with her grandchildren.

The way my mother got to the United States was her abuela. Petra was a domestic worker for a wealthy American family living in Lima. They wanted her to come work for them in San Francisco and her condition was, “I will only go if you allow me to bring my 14-year-old granddaughter.” My mother. Mind you, this is a girl who was living in a dirt shack at a very early age. Going through the Golden Gate of San Francisco and then moving immediately into a mansion in Pacific Heights was stunning to her. 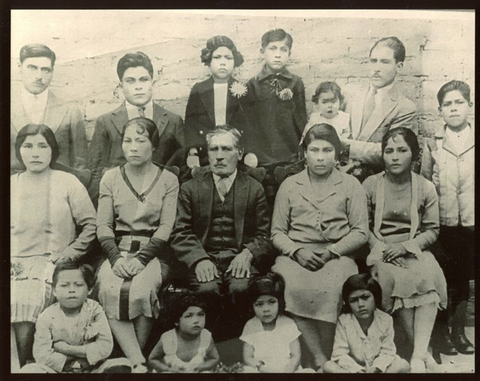 My mother’s abuela, “Mama Petra,” is the first person in the second row from left. This was her second husband’s family, so others pictured are of no blood relation to my mother except her Tio Victor (Petra’s son), as a boy, pictured top row, fourth from the left.

Two years after her arrival, Petra passed away. And that family adopted my mother and raised her. It was a jarring rags-to-riches scenario—and then that evaporated when she met and married my dad. They were not happy with her choice, and they stepped back. My mother was left to develop her notion of family in her new marriage.

After five kids and seven years of marriage, my father vanished and went off and started yet another family. As emotionally devastated as she was, my mother knew that for her kids to survive, we needed to be near the family that we knew. She bought a house two blocks away from my father, which was also near some aunts and uncles and other cousins. The one thing she lacked in her own childhood, she understood was the saving grace for all human beings.

What is my mother’s relationship with money? You really want to crack that open? For her, there’s pride in getting it done yourself. My attempt to extend help to her only goes so far. She’s only willing to accept so much. I find it incredibly frustrating. That pride keeps her from living the high life that she should be living.

You have to earn your way. I try to teach my own children the enjoyment of a job well done. I’m going to put a new fuel pump in my ’64 impala today. I cut my own grass. Cut my trees. I’m trying to get my son to enjoy what that is, too. At 16, he’s a little distracted.

My relationship with money is not complicated. I always knew from an early age that, later, I was not going to want. I think I still disdain the lack of having what we needed. I didn’t see it as suffering at the time, but I didn’t dig it. And if I can’t make money as an actor, I’ll make it some other way. I’ll cut your grass.

My mom leaves us messages all the time. At 85, she still sounds like a girl in terms of the tone and enthusiasm and zest for life. “My son! It’s your mama! I’m super, super busy. Beautiful day. I’m going to Home Depot. I’m doing stuff around the house, but you keep coming to my head. I have to call you. I hope you’re well. I’m sure you are. Just checking! God bless. I’m going out right now, honey. Take care. Mama’s fine. Everything’s good. Love you! God bless you! The Lord is my shepherd.”

I can’t tell you how many friends or folks I’ve had in my life who’ve said, “I want her to be my mom.” 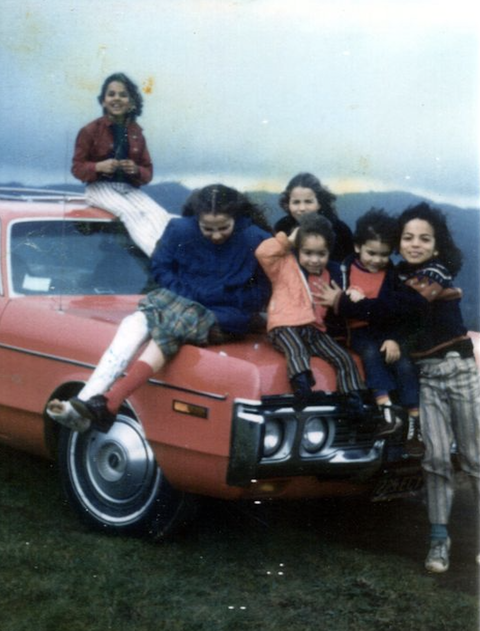 My mother always insisted on reserving Sundays as family days. This photo is atop Mt. Tamalpais, on one of many Sundays devoted to taking a drive across the bay, where the views were glorious…and free. Probably 1971. (From left: Peter (8), Nadya (10), Georgia (6), Veruschka (2), a neighborhood friend, and Benjamin (7).)

You have to be there. It sounds so basic, but it’s a fact. My mother showed up at every turn. And to this day, our larger family, and I’m talking about my brothers and sisters and our children, everything circles around that.

I don’t think it’s a mistake that we refer to the planet that we live on as Mother Earth. It’s all giving. It’s all nurturing.

I have a beautiful marriage with my wife. We’ve been married for 20 years. And we’re raising two kids, one with special needs. Raising kids is complicated. It’s beautiful, it’s emotional—overwhelming at times. To look back on the days when my mother raised us and to recognize that she did it alone, and did it well, did it progressively, did it with real intentional behind what she was trying to imbue us with…to me, that’s no less than miraculous.

I look back on Thanksgivings. Even when we didn’t have much, my mother’s home was the crash pad for what we used to refer to as the family orphans. We’d have anywhere from 10 additional guests to 20 sitting at our table. Now, I’ve got a 12-foot table in the dining room downstairs, and I bring it with me wherever I move. The prerequisite is, I have to find a space that accommodates the table, otherwise I can’t live there.

I strongly identify with the indigenous culture that I come from—from Petra. And it’s lasting because, in the aftermath of being disowned by not one, but two, families, it became the life raft for my mother. It became a reminder of who she is. 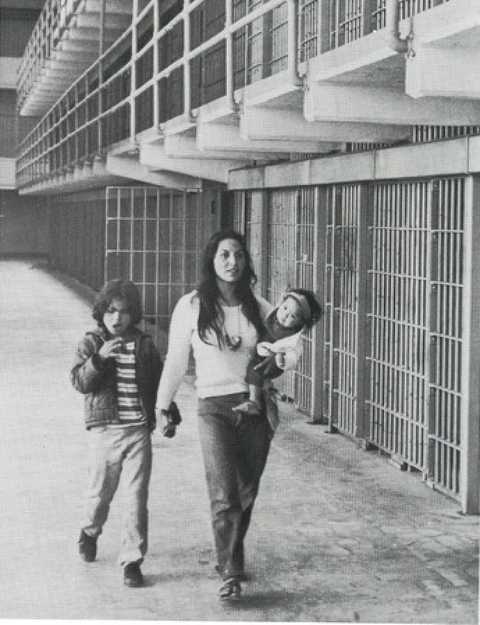 Veruschka and Peter outside the American Indian Center on Valencia St in San Francisco, 1973, with their mother.

In 1969, my mother became active in the American Indian movement during the takeover of Alcatraz Island. My mother saw the Mohawk Native American leader Richard Oakes on the local PBS channel. He was saying, “Indians of all tribes come down and support our cause.” My mother called the local channel and got him on the phone. She said, “I’m Native American, too. I’m Indian, too. But I’m from South America, does that count?” And he said, “We don’t recognize the border.” In that moment, our cultural identity was sealed.

She took a speed boat to the island the next day with my six-month-old sister. She said all these brown hands reached up to help her down off the boat, and that was the first time that she was in America that she felt a sense of belonging and acceptance.

My 16-year-old son Mateo was recently invited to participate in what we essentially call a manhood ceremony—which is like a Native bar mitzvah. It’s a four-day ceremony where we go to the ceremony grounds and different respected elders from the community come in and speak. It all leads to a well-respected woman elder coming in and sharing with the boys her notion of what it means to be a man. But probably the most significant point is, at its ending, where each boy lines up with his red shawls and his mentor and they walk out to the reception area where the larger community is there to celebrate them and thank them for taking on this responsibility. And not least of those receiving them are the grandmothers. And there was my mother, who gave a beautiful speech to each of the young men, collectively saying as much. And to have that kind love and support expressed out loud for all to hear, not just the members of your community, but under the eyes of God, that can’t help but land on those young men and feel auspicious.

It wasn’t until my mom was in her mid-fifties where I saw this significant embracing of what I learned was her grandmother’s faith, which was Seventh-day Adventism. She’s out loud and proud with that. But when it comes to my own children, the lesson is non-specific. They have their own separate belief system that’s different than my mother’s, different than mine. I think there’s value in that.

It’s important to share these stories with my kids. Whether they ultimately land in the moment, I’m not sure of yet. It’s a pretty cush life they have. I didn’t grow up with that.

Here’s the funny thing about my mom. One of the worst housekeepers you would ever want to meet. Truly not a great housekeeper. The house would be a fucking mess, but you’d come in from a day of playing and the first thing you would hear is, “Wash your hands!” To this day, that’s something I say to my kids when they come in.

My mother never disparaged our father. She always reminded us that he is our father—was our father. And in speaking of him that way, she demonstrated her own sense of forgiveness. To not carry a grudge and move forward. I’m still working on that.

You can’t get away from who you are. From what you came up with.

This story was created as part of From Our Abuelas in partnership with Lexus. From Our Abuelas is a series running across Hearst Magazines to honor and preserve generations of wisdom within Latinx and Hispanic communities. Go to oprahdaily.com/fromourabuelas for the complete portfolio.