I’ll out myself: it was a bad day. I was, I admit, moderately drunk after this bad day. This bad day was so bad, that—refusing to add to my chosen outfit du jour of just my underwear to go outside and buy something better—I squeezed lemon juice into a shot of gin. That was my cocktail. TV for the night would be whatever my YouTube TV recommended first.

That movie was Big Daddy.

I first watched the Adam Sandler-starring Big Daddy not long after its 1999 debut, probably when I was a little too close in age to the five-year-old boy at the heart of the film to really get it. Considering that it was sandwiched between Sandler releases like The Waterboy and Little Nicky which got considerably more attention, I didn’t remember much about the movie. Maybe just the McDonald’s scene, which probably was the sole force between the fast-food behemoth’s switch to an all-day long breakfast menu. But rewatching the film as an adult, buzzed as hell at home? I convinced myself that Big Daddy—which follows a thirty-something named Sonny as he unexpectedly finds himself raising a little kid who calls himself Frankenstein—is far better than people talk about it now. (Most rankings have Big Daddy in the back half of their Sandman Top 10.)

Like they say, a drunk mind speaks a sober heart. A week later, I dove back into Big Daddy. Scuba Sam, the Kangaroo song, “I’ve had some smelly ones before, but your son is by far the smelliest,” all of it. Sure, Big Daddy, like every other comedy made before The Hangover, has plot beats it would surely take back. (The film aims for laughs at the expense of employment at Hooters, plus the romantic relationship between Mike and Tommy.) If anything, though, this rewatch had me even more convinced that Big Daddy is the best of Adam Sandler’s damn near overflowing library of films. But instead of a too-long essay that would bore the shit out of poor Frankenstein, I broke our trip down Big Daddy lane into the five core components of The Adam Sandler Film™. My argument: while other Sandler films might do one feature better than another, Big Daddy is the most powerful combination of each.

You should be able to describe an Adam Sandler film in a sentence or less.

Hockey player tries golf. Pizza boy receives a fortune. The waterboy joins the football team. What about Big Daddy? Manchild receives custody of actual child. Early on in Big Daddy, we see little Julian—who, again, later renames himself Frankenstein—show up on Sonny’s doorstep, with a note from his mother. She can’t take care of him anymore. The kid will grow up without his birth mother. Learning this so early on infuses the rest of the film, from every Sandler har-har to Julian murdering a flight of pigeons, with a genuine swell of emotion that is sorely lacking from Sandler’s non-dramatic work.

Various acts of screaming, silly-voice-making, and facial expressions that we only associate with Adam Sandler. You know it when you see it.

Whereas Adam Sandler acting like a five-year-old boy is grating in something like Jack and Jill, it’s incredibly endearing when he’s acting like a five-year-old boy because he’s the legal guardian of… a five-year-old boy. It’s the same reason why Billy Madison works. It’s funny when Sandler act like a kid while he’s in the company of kids. While Billy Madison was often antagonistic (“today, junior!”), it’s just plain sweet in Big Daddy. He’s trying his damndest to raise this little boy. Few bits land harder in Big Daddy than Sandler’s ALLLLLRIGGGGGGGGHTTTTTTT when poor Frankenstein wants the Kangaroo song.

The image that haunted every childhood trip to McDonald’s.

Dopey guy wills himself to be virtuous enough to date his crush.

I’ll keep this one short: Sonny repeatedly failing to romance the out-of-his-league Layla, played by Joey Lauren Adams, is the most underrated Sandler romance of them all. When Layla actually does see Sonny’s heart, after justifiably rejecting him so many times—it feels real.

(Just because I won’t get a chance to shout this out elsewhere, let me point out a couple other feathers in Big Daddy‘s cap: an early-ish career Jon Stewart, who grounds the film as the necessary adult in this room. Cole and Dylan Sprouse doing double duty as the cutest damn kid you’ve ever seen. And a truly staggering amount of set-pieces, from the pissing-on-a-wall-to-McDonald’s-breakdown scene, to Scuba Sam paying Julian a visit.)

The employment and well-distributed casting of Adam Sandler’s frequent collaborators, bros, and buddies throughout the movie.

When you see an Adam Sandler movie, you expect to see a certain swathe of people. Even if you hate Rob Schneider, you watch a Sandman flick so you can see Schneider and roll your eyes. You want that feeling. So if you don’t see at least three actors who weren’t in Grown Ups and/or Grown Ups 2, then I start to question whether or not I’m seeing an Adam Sandler movie. Not only d0es Big Daddy pass the Grown Ups test, it uses each Sandlerite to optimal comedic effect. A sampling:

Steve Buscemi: Plays a homeless man with a strangely endearing blend of dryness and earnestness. Sonny bribes him with McDonald’s in the final courtroom scene.

Rob Schneider: Becomes an illiterate delivery guy who’s admirably there to give Frankenstein a good chuckle. (Watch out for the sleeper hold!) 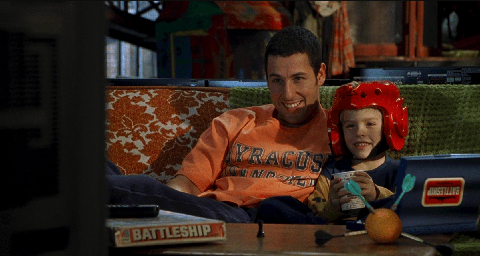 Whether it’s Howard Ratner [SPOILER] or the rendition of “Forgetful Lucy” that will make you cry, there’s a moment when you’re supposed to feel something, anything! before the credits roll. At the end of Big Daddy, your eyes may or may not water when Sonny officially receives custody of Julian. But the real magic is what the film makes of Sonny’s daddy issues. We learn that Sonny’s obsession with gaining custody partially stems from his relationship with his own father, who shows up to court to fight against his son. I’ll leave you with what Sonny says back to him. It’s something that, in our too-often hellish world of 2022, carries the same emotion—and universal truth about fatherhood—as it did 23 years ago.

“I know this is the right thing because I would die for this kid just so he won’t feel one ounce of sadness. That’s why you’re here right now, to protect me, to be scared for me to be a good father. And that’s exactly what I’m gonna be.”