Billy Reid has been playing guitar since well before most of us can even remember. We’re sitting at a hotel bar in Nashville, looking through the photos on his phone, and he shows me visual evidence: a black-and-white shot of the designer himself at three years old, holding a single-cutaway upside down, gripping the headstock with his right hand and plucking with his left. Then another upside-down guitar, this time in red to match the shorts and striped tee he’s wearing at the ripe old age of five. It occurs to me that I might have accidentally missed his left-handedness when he fast forwards with a flick of a finger to backyard shot from the ‘90s of him sitting in the grass, then another of him on the couch with his daughters, strumming away like a righty. 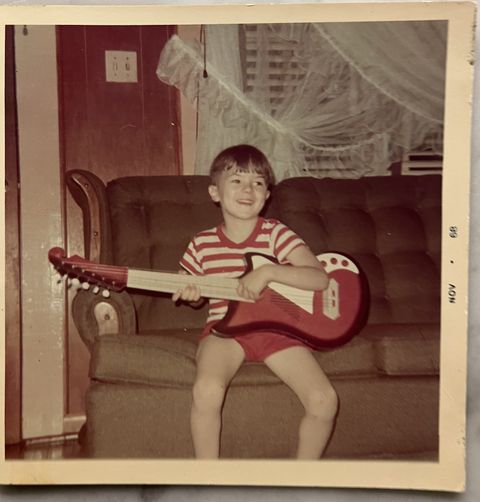 It’s hard to catch all of the logos as we look through his musical progression, but I recognize at least one Epiphone, and think it’s fitting. After all, we’re not just in Nashville to sip cocktails and talk music (as much fun as that’d be). We’re here to celebrate Reid’s collaboration with the iconic brand that just so happens to have Epiphone under its umbrella: Gibson.

The Nashville-based company reached out to Reid and his Florence, Alabama-based crew more than a year and a half ago to talk about working together. Reid, naturally, was all for it—once he got over the kind of initial trepidation you might expect from a lifelong musician. “It’s kind of an intimidating brand,” he says. “You just don’t want to mess it up.” 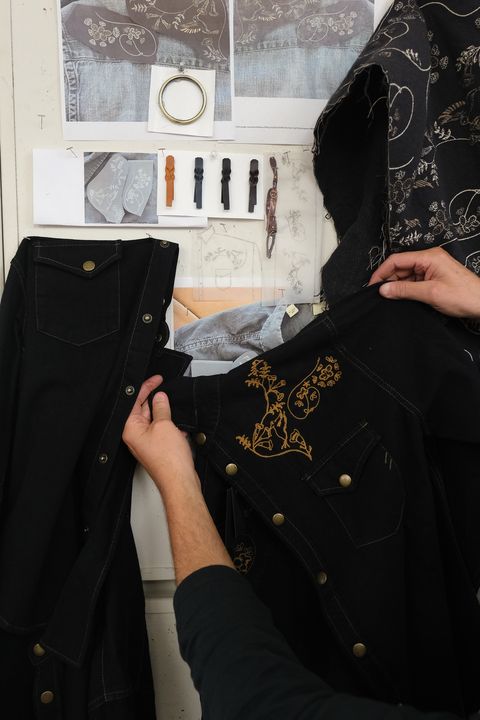 Reid comparing the final product to some of his initial design work.

Luckily, Reid already had fate on his side. “It was weird because we were working on fall ‘22—what’s coming out now—and the theme was ‘singer-songwriter,’ he explains. “We had started the collection, and one of the first pictures on the mood board was a picture of the Hummingbird.” If your knowledge of Gibson begins and ends at the Les Paul—hey, no judgment—think of the Hummingbird as its iconic acoustic counterpart. And perhaps no element of it is more iconic than its intricately designed pickguard. 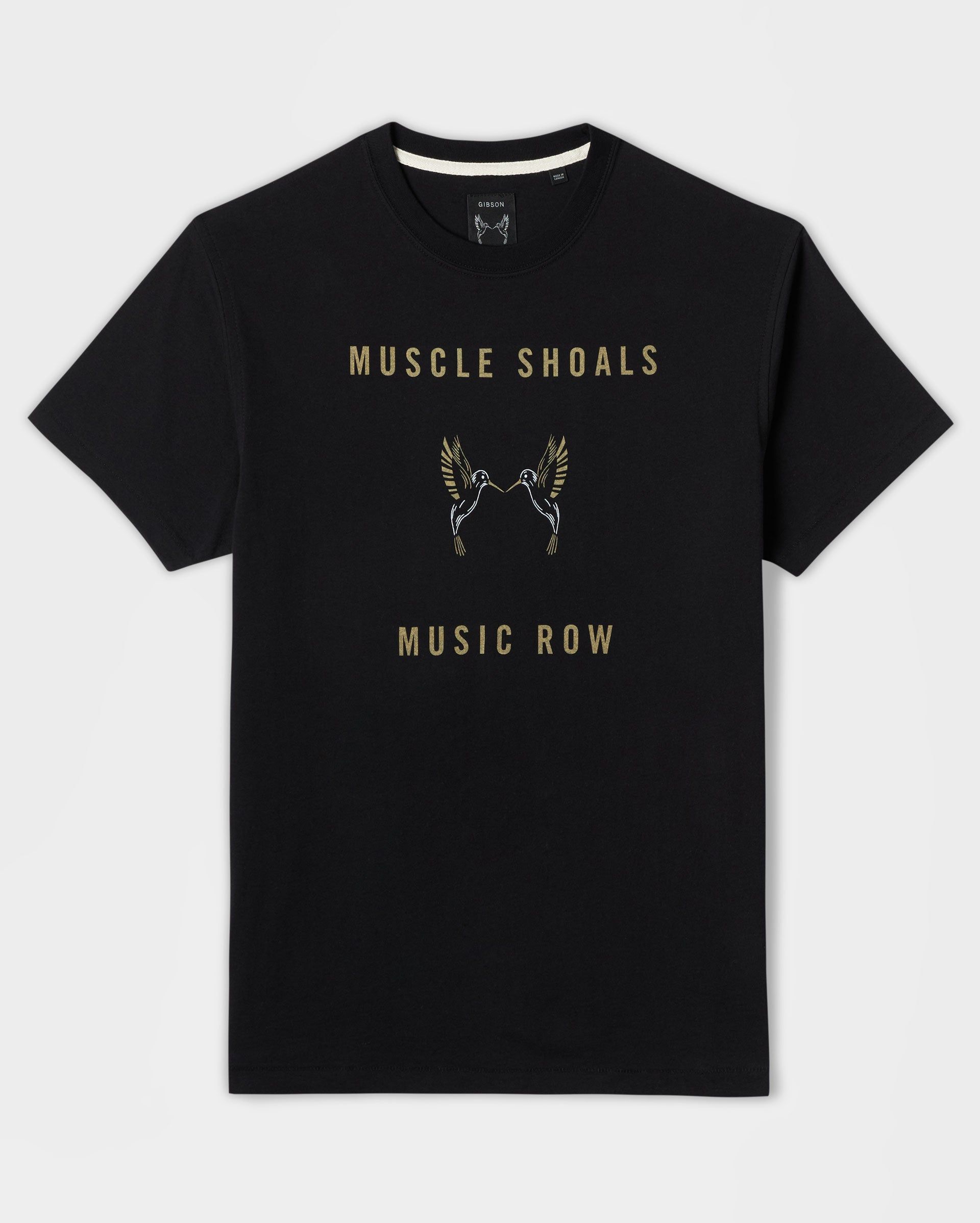 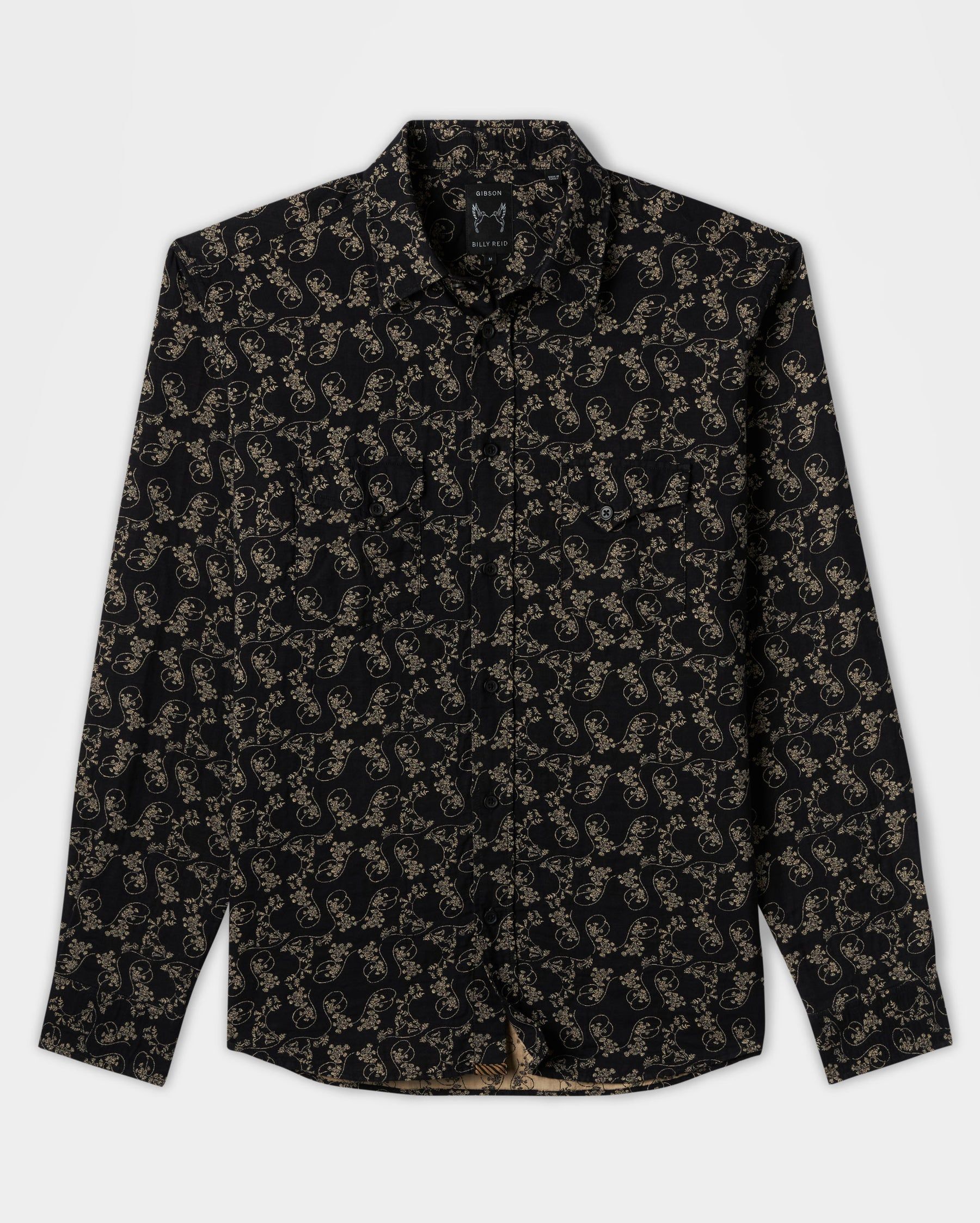 “There are like six different artworks for the pickguards that they use for the Hummingbirds and the Epiphones,” Reid says. “So they sent us all six and we took elements from all six of them and put them into one—and then put our little branding touches on it.” Though he’d briefly toyed around with iconography like the Gibson “G,” once that Billy Reid-ified version of the Hummingbird motif came to life, he knew that he’d landed on the core of the collection.

“I feel like we were able to take that pattern and put what we do on it,” he says. That meant creating standout pieces by chainstitching it by hand onto an extremely limited run of denim western shirts, knitting into sweaters, and putting it on bandanas and scarves. But it also meant taking it in a quieter direction by turning it into the lining for the brand’s much-loved leather jacket, or a tone-on-tone black chainstitch logo on a black sweatshirt that won’t look like an obvious part of the collab until you’ve worn and washed to perfection. “I’ve got the original sweatshirt,” Reid says. “I know how it ages. And it’s what you’re going to see about six months from now that’s really cool.” 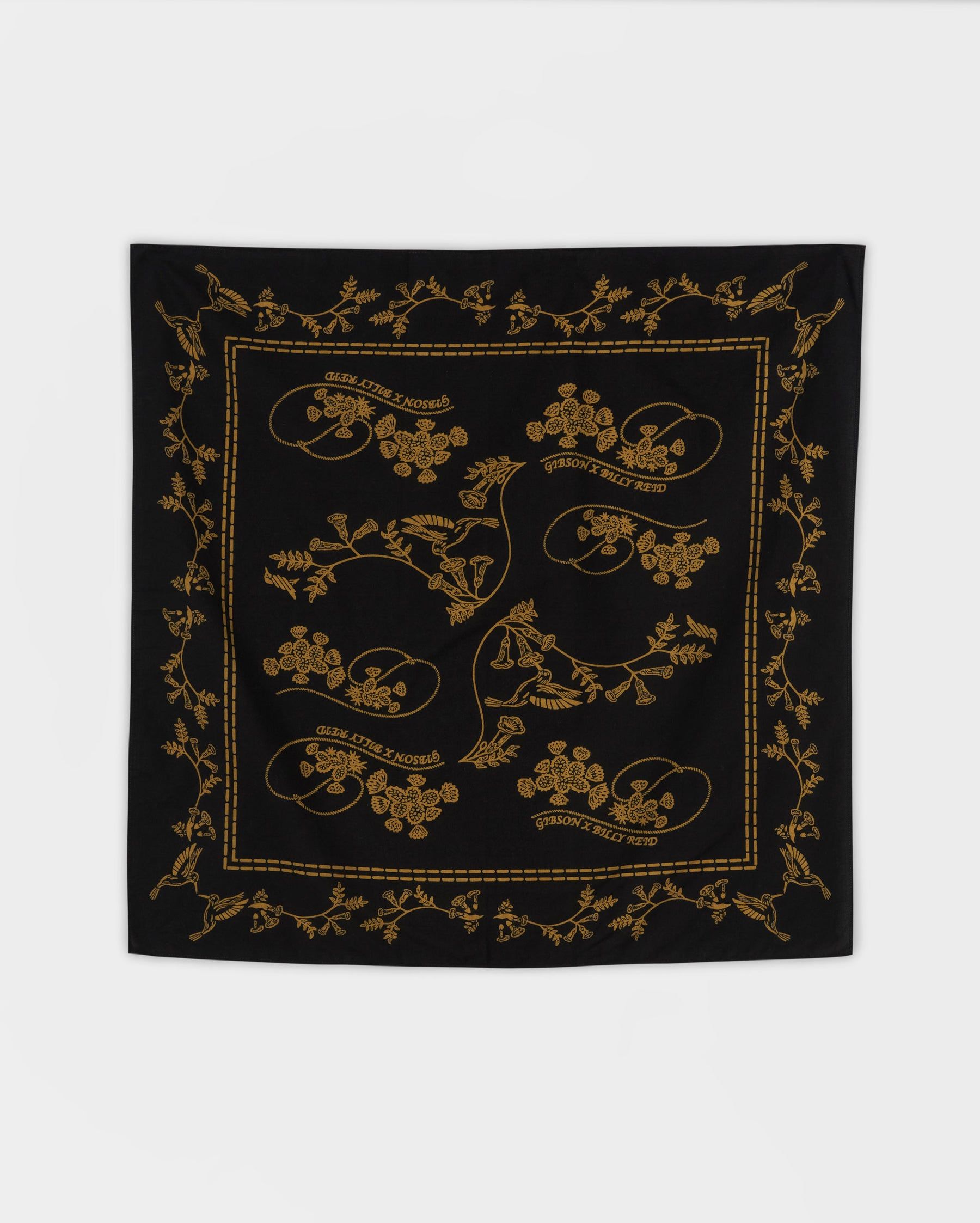 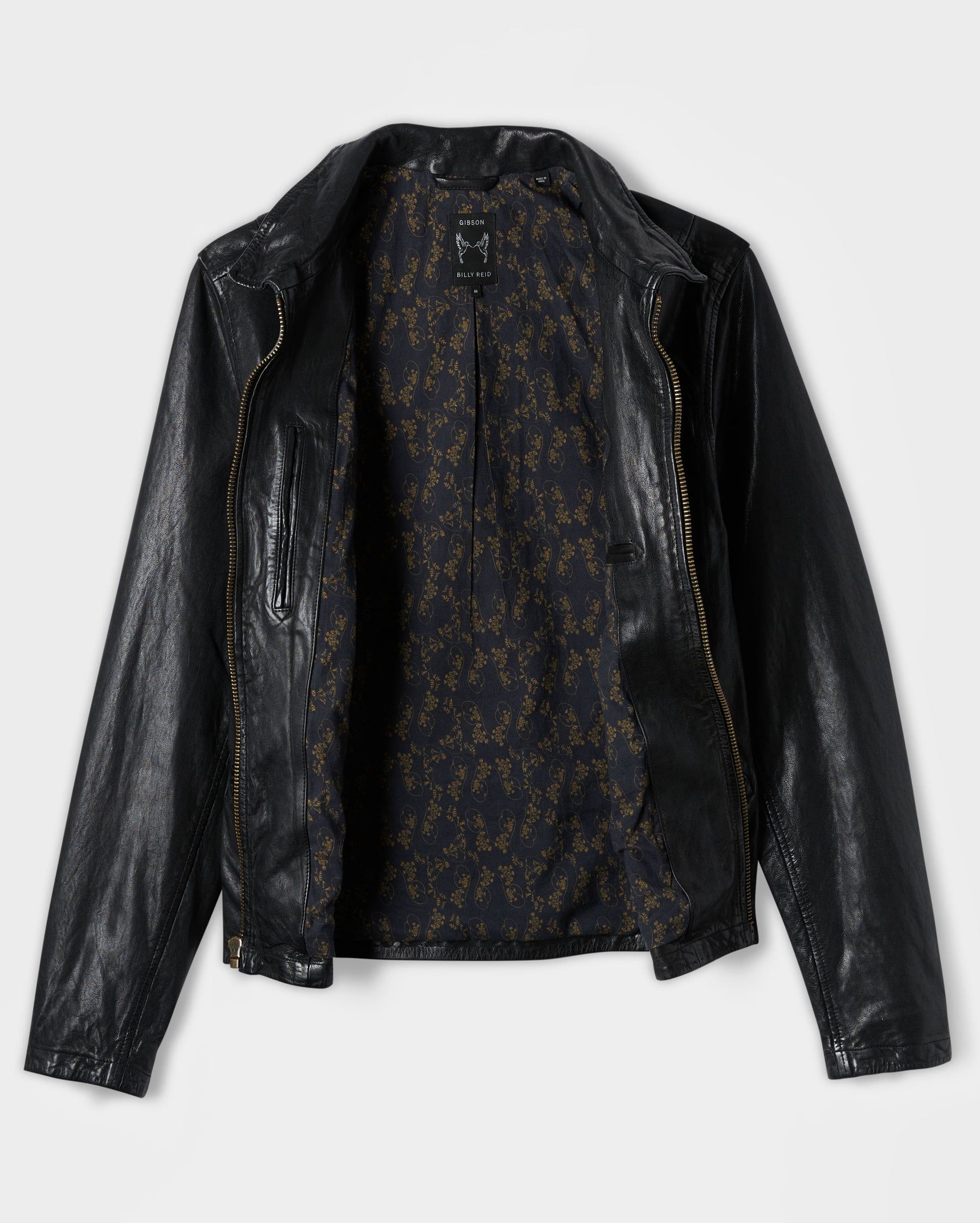 The whole idea is balancing the impulse to shout “Gibson” from the rooftops with the reality of creating something wearable that a customer will treasure for years. Another Western shirt, for example, uses the Hummingbird motif in an all-over jacquard fabric that was custom-made in France. “So we really took a lot of care and treated it like top-shelf textiles in the way we developed it. Which it deserves,” says Reid. “I mean, Gibson guitars: That’s the top of the game, man. It made sense to approach it that way. And limiting the amount of product to keep it special.” 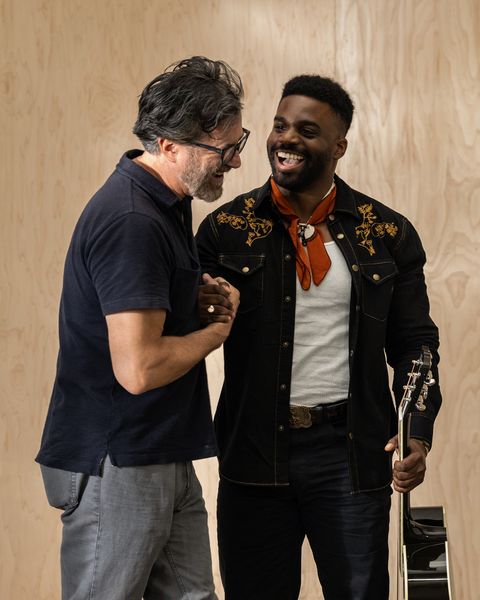 Reid backstage with musician Abraham Alexander shooting the campaign for the collab.

Speaking of limited: the collaboration is already moving fast. The Western shirt with the hand-stitched details at the shoulders released first in Billy Reid stores in small numbers, with even smaller numbers hitting the website. Items like the leather jacket, sweatshirt, and jacquard shirt aren’t quite as rare, but shouldn’t be expected to sit around for long. Who knows if another round of Billy Reid x Gibson will come along someday, but for now, this is it. “Whenever we do partnerships, it’s gotta be real,” Reid says. In this case, that means not just authentic but real good, real popular, and real likely to be gone before you know it.