The Breitling Navitimer’s slide rule calculator, the most recognizable and unique function of the iconic watch, which turns 70 this year, is a function that defined its early success with professional and amateur pilots and yet, somewhat ironically, it’s the one function that very few people these days actually know how to use. At the time of its invention in 1952 by Willy Breitling, the Navitimer offered pilots a ground-breaking, wrist-mounted chronograph capable, thanks to the slide rule, of calculating all the navigational computations required to get from A to B with accuracy. 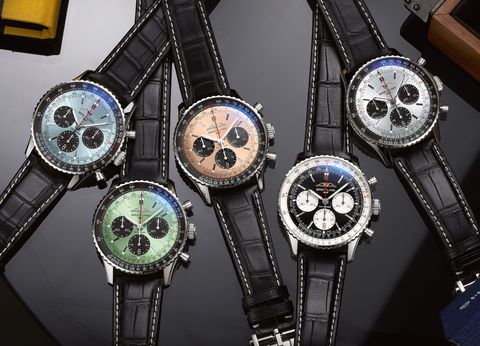 Just a few of the many (many!) options available in the new Navitimer collection.

The first Breitling watch with a slide rule calculator was the Chronomat, created in 1942. But it was not until peace time, and a decade later, that a more refined version—developed with the help of the Aircraft Owner and Pilots Association in America—emerged in the form of the Navitimer, a watch created to serve the burgeoning civil and private aviation worlds. Early versions, delivered to AOPA members, carried the association’s own winged crest on the dial. The Navitimer evolved throughout the 1950s and 1960s as contrasting white sub-dials were added to aid legibility and the original beaded edge of the bezel, designed to make turning the slide rule easier, gave way to a serrated finish. As with many tool watches of the time, the Navitimer’s businesslike looks also made it popular with stylish men on the ground. Fans ran the gamut from musicians like Miles Davis to racing drivers like Graham Hill and Jim Clark.

To celebrate the 70th anniversary, Breitling today introduces a new family of Navitimers. Multiple modern dial colors—including sunray options in copper, blue, and green—are paired with all the hallmarks of the original, including the all-important slide rule and the distinctive triple sub-dials. The range of sizes offers even more choice. It’s available in 46mm, 43mm, and 41mm diameters, with each using a slightly different shade of blue or green (41mm was the size of the original 1952 version). The latest Navitimer family is driven by Breitling’s in-house COSC-certified Chronometer B01 caliber automatic movement with a power reserve of 70 hours.

Further variations in the sub dial colors use white or black sub dials, stretching the possibilities to as many as 14 different permutations. For this special anniversary edition, the AOPA logo makes a return to the dial of the Navitimer. While the color choices are more obvious innovations here, subtle design tweaks, including a combination of polished and brushed surfaces, a flatter slide rule element and a domed crystal, give the watch a cleaner, more modern look than its predecessors.

The slide-rule can look somewhat daunting to our untrained eyes but in fact it’s pretty simple. Not that we’re going to get into it here. But for pilots, being able to calculate speed and distance on the hop meant they could also track useful things like fuel consumption or the effect of tail or headwinds on the aircraft’s speed over ground. Two logarithmic scales around the outside edge of the dial, one fixed and the other bi-directional, allow you to perform calculations as complex as those needed in the air to navigate a plane across continents or, on the ground, as mundane as calculating a tip on a restaurant bill, converting miles to kilometers or dollars to pounds. Not that you would of course, when your phone can do it all in seconds. But it’s good to know it’s there in case your battery dies.