Butter: Not just the name of BTS’s chart-topping hit, but also the perfect way to describe their fits at the 2022 Grammy Awards red carpet. The seven members—Jin, Suga, J-Hope, RM, Jimin, V, and Jungkook—strutted in front of feverish fans and the paps in coordinating suits consisting of shades of white, brown, blue, and beige. They were exceptionally smooth, and they were by Louis Vuitton.

All of the fits were cohesive, but slightly different. V and RM, for example, wore matching brown suits and purple shirts, but the former accessorized it with a brown tie and larger-than-life boutonniere, while the latter opted for a purple tie and diamanté brooch. Jungkook and Jimin rocked aquamarine blue, but Jungkook sported a bolero jacket and pleated pants, while Jimin kept it traditional. Suga and J-Hope wore titanium white, one in a double-breasted blazer and the other single. And Jin, usually the odd man out, showed up in a fitted beige number with a powder blue tie. 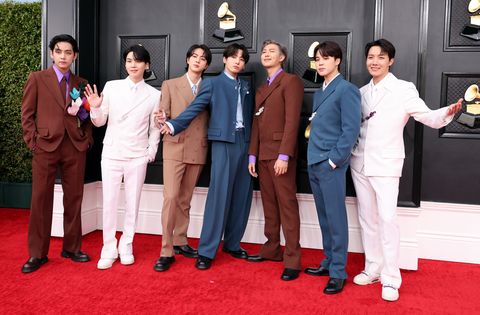 In an age when bands and music groups show up to events rocking different fits, BTS’s coordinating LV suits with slight variations brings it back to the early 2000s: the days when the members of NSYNC, the Backstreet Boys, Dru Kill, and more graced every red carpet in all things matchy-matchy. But unlike those examples from that past, BTS’s looks were sharp, classy, and, several decades from now, won’t seem outdated. They are not costumes. These are spiffy suits—great ones, in fact—that just so happen to harmonize. And if there’s one thing that the K-Pop group is great at, aside from serving fashion with a capital F, it’s harmonizing.

Speaking of singing in tune, the boys of BTS, who are nominated for one Grammy for best pop duo/group performance, are set to perform later tonight. And we expect even more buttery looks to sizzle on stage.