Before that whole damn thing happened last night, there was a quieter moment. A moment of calmness, but also coolness, as one Kevin Costner—he of a little show called Yellowstone; you may have heard of it—made his way down the Oscars red carpet with his wife Christine Baumgartner. This isn’t exactly a rare occurrence. Costner is no stranger to the red carpet, and neither is Baumgartner. But this time around, Costner brought an extra element to his black-tie look by adding a pair of black sunglasses. The effect? Transformative.

Costner seems to know the power of a good pair of shades deployed with purpose. Take a look through recent photos of him—whether strolling around L.A. or showing up at the Field of Dreams-themed game between the Yankees and the White Sox last year—and you’ll see he has a penchant for tossing on a pair of wayfarers. And bringing your go-to sunglasses onto the red carpet isn’t so shocking of a move at this point; younger stars of all stripes have been doing it with gusto for a while now. 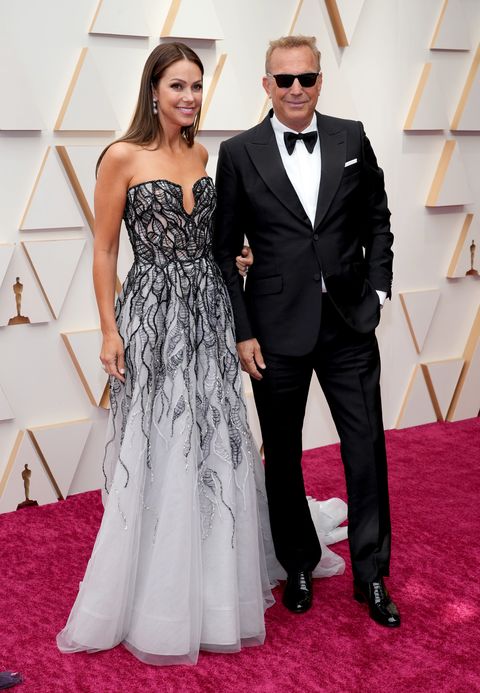 Costner, with Baumgartner, looking sharp-as-hell in Gucci and some expertly chosen shades.

The secret sauce, in this scenario, is Costner himself. He’s 67, not 27, and the suit-and-sunglasses look just hits different when it’s backed up by the kind of gravitas an elder statesman of the Hollywood scene brings to an event like the Oscars. Couple that with the fact that he’s wearing Gucci—another strong move for a man of a certain age—and you’ve got something worth paying attention to. And it’s damn sure more Academy Awards-appropriate than that other thing that went down last night. So, let’s focus on the good.

If you’re looking to channel Costner’s vibe, just pick up a pair of his preferred shades, the Ollis Sun by Oliver Peoples.

And if you’re in the market for something that’s not exactly what he wore for the big night but always a good call regardless, grab some Ray-Bans and let ‘er rip.