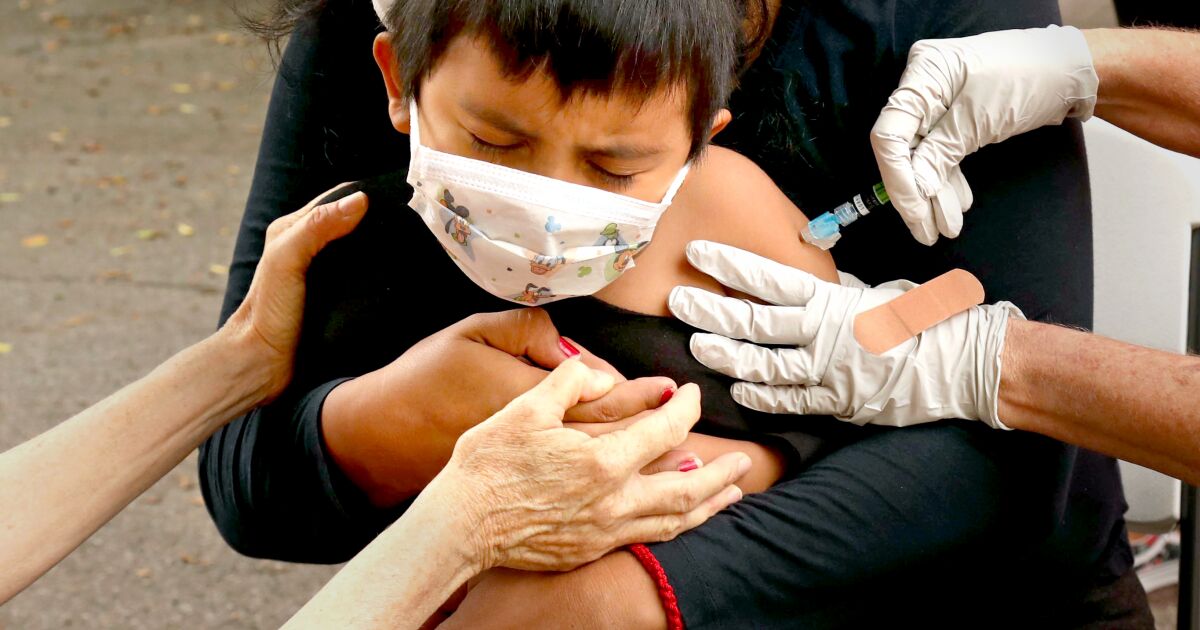 Flu season has roared to life in California, reaching levels not seen in years and threatening to further strain a healthcare system already contending with an onslaught of RSV cases and still-potent circulation of the coronavirus.

Underscoring the worrisome conditions, California Department of Public Health officials on Monday reported the season’s first death of a child under 5 due to flu and respiratory syncytial virus, or RSV.

“This tragic event serves as a stark reminder that respiratory viruses can be deadly, especially in very young children and infants,” Dr. Tomás Aragón, California’s public health director and health officer, said of the pediatric death.

Flu activity was considered high in California over the week ending Nov. 5, the most recent span for which data are available, according to the U.S. Centers for Disease Control and Prevention. That’s the second-most severe category on the agency’s five-tier scale.

The CDC’s assessment is based on monitoring for respiratory illnesses that include a fever plus a cough or sore throat, not just laboratory-confirmed flu cases.

California’s latest positivity rate for flu was 14%, well above the levels at this time in each of the past five years, according to the state Department of Public Health. The rate is even worse in L.A. County — 25%, up from 13% last week.

In a recent communication, the Los Angeles County Department of Public Health wrote that healthcare providers “must prepare for the possibility of a severe influenza season this fall and winter.”

“All patients — especially those aged 65 years and older — should be urged at every healthcare encounter to get both their influenza vaccine and their updated fall COVID-19 booster as soon as possible,” the message continued.

Thirteen flu deaths were reported in California from the start of October through Nov. 5, with eight of them among seniors.

California is the only state on the West Coast with a heightened degree of flu activity this early in the season, according to the CDC. However, several states — including New York, Connecticut, New Mexico, Colorado, Nebraska, Ohio and Illinois — have high or very high levels.

Officials have consistently warned of the possibility of a potential severe flu rebound this year following two pandemic-blunted seasons, and have urged residents to get vaccinated and take other steps to protect themselves.

Those calls have taken on increased urgency, given an early punch of RSV and general expectation that the coronavirus could surge again this fall and winter.

“Knowing that we’re facing the possibility of having multiple respiratory illnesses circulating all at the same time and stressing our healthcare system, we all can be sure to do the things we know that work to prevent spreading respiratory illness: washing our hands, wiping down frequently touched surfaces, staying home if we’re not feeling well and wearing a well-fitting, high-filtration mask when indoors, especially if you’re around those most vulnerable to severe illness,” L.A. County Public Health Director Barbara Ferrer said Thursday.

Children’s hospitals continue to be busy coping with RSV, which can cause significant illness and even death in young children and older people.

“Specifically, within California, we are noticing higher rates within Southern California,” Dr. Rohan Radhakrishna, a deputy director at the California Department of Public Health, said in a briefing to health professionals last week.

As of early November, 33% of children’s specimens statewide were testing positive for RSV, the highest such rate at any point in California since fall 2019, according to data presented by Radhakrishna.

Orange County — California’s third-most populous — declared a health emergency amid the high level of RSV and other respiratory illnesses “requiring hospitalization of children exceeding the capacity and infrastructure of our designated children’s hospitals.” Orange County is particularly vulnerable because it has only two primary children’s hospitals, both run by Children’s Health of Orange County. The area’s hospitals are also not always able to accept pediatric patients transferred from other areas.

An increase in flu cases — and hospitalizations among adults — threatens to further compound the situation, according to the Orange County Health Care Agency.

“Flu hospitalizations are not routinely reported, so we can’t specifically say that we’re seeing more flu hospitalizations,” the agency wrote in a statement to The Times. “But based on the increased influenza case reports, we can anticipate influenza hospitalizations [among adults] will increase in the coming weeks. Those will occupy beds that would normally also be used for older [pediatric] patients.”

Given current and anticipated hospital demands, state health officials also are recommending that healthcare facilities “explore short-term measures to expand capacity for evaluation and treatment of pediatric patients,” according to a statement from the California Department of Public Health.

“We are entering a busy winter virus season — with RSV, flu and COVID-19 spreading — and urge parents and guardians to vaccinate their children as soon as possible against flu and COVID-19,” Aragón said. “It’s also important to follow basic prevention tips like frequent hand washing, wearing a mask, and staying home when sick to slow the spread of germs.”

Compared to Orange County, L.A. County is reporting relatively less strain, in part because it has more children’s hospitals. Still, one of the main pediatric hospitals — Children’s Hospital Los Angeles — says that while it can admit patients, its emergency room is so strained that it cannot always accommodate transfers from other hospitals.

About 62% of pediatric hospital beds in L.A. County are occupied, up from 54% in early August. Additionally, 70% of pediatric intensive care unit beds are being used, up from 61% a month ago.

“These numbers don’t translate into a dire situation at hospitals at this moment. But we are hearing anecdotally that hospitals and healthcare workers are feeling stressed,” Ferrer said.

Officials also note that hospital capacity can quickly worsen at many facilities that only have a few beds designed to treat children.

“As few as nine or 10 new hospitalizations can have the potential to put a hospital at capacity for their pediatric patients,” Ferrer said.