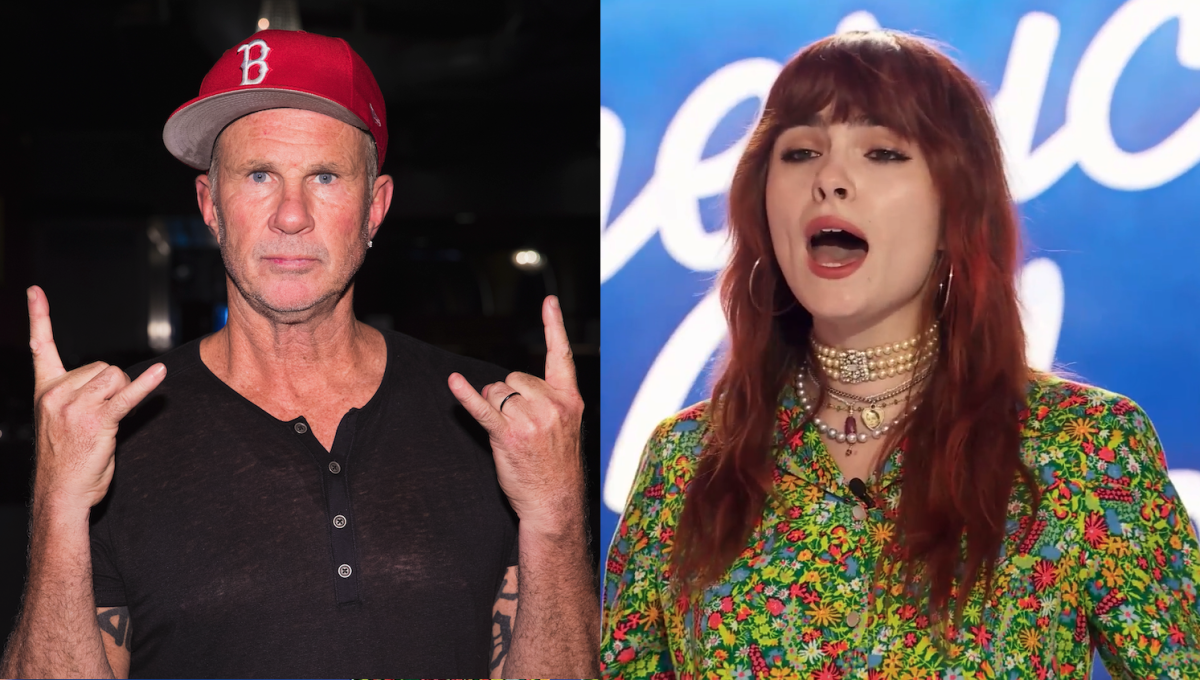 The American Idol Season 20 auditions came to a close Sunday, and since this was ABC’s post-Academy Awards bonus episode, there obviously had to be a Hollywood connection. Enter second-generation musician Ava Maybee, daughter of A-list drummer Chad Smith, whose multi-platinum band the Red Hot Chili Peppers is actually receiving a star on the Hollywood Walk of Fame this week.

Interestingly, 20-year-old Ava did not namecheck her famous father during her audition, possibly because the Peppers have never been huge fans of Idol. (They’ve never licensed any of their songs for that show — or for The Voice, for that matter.) When Lionel Richie gave Ava an enthusiastic “yes!” (definitely not a “maybe”) after witnessing her smoky audition of Stevie Wonder’s “Lately,” he actually said, “We’re going to go against your family.” This means producers either edited out any actual mention of her lineage, or Lionel was just making a pun on her stage surname. Regardless, Ava’s dad is clearly supportive of her career, as he has proudly promoted her original music to his hundreds of thousands of followers in the past.

It’s also quite possible that Ava — a junior at NYU who’s been singing and performing since she was 5 years old, and whose full name is Ava Maybee Cardoso-Smith — simply wanted to let her talent speak for itself. Her music has already amassed 935,000 streams on Spotify (569,000 for “Lay Low” alone), and the judges were very impressed with the “cool alto sound” of this “diamond in the rough.” Lionel compared Ava to the one-and-only Cher, and Katy was transfixed by Ava’s star style, seeming even more impressed by Ava’s ability to successfully mix floral and leopard prints than by Ava’s deep, distinctive voice. “I do feel like you’re an artist,” added Luke Bryan.

That being said, while Ava clearly wants to make a name for herself on American Idol, if there’s any contestant who could convince the Chili Peppers to finally clear one of their songs for the show, it’s her. Check out her Instagram cover of RHCP’s “Universally Speaking”:

Sunday night’s other successful auditions are below. See who else will be joining Ava in Hollywood; one of them may even end up onstage at the Season 20 Idol finale, at the home of the Oscars, the Dolby Theater.

This Cuban-American singer-songwriter with purple crew-cut was no shrinking violet (no pun intended). She showcased a clear, crisp, cut-through voice on her strong original song, and her eyes were just as piercing as she locked in with the judges. Luke said she set an energetic tone for the day, and Lionel said Yoli “caught fire” and embodied “what entertainment and singing in this business is all about.” But Katy wanted more vocal dynamics and surprisingly was a no. I’m glad Katy was outvoted in this case. I think Yoli is a true star.

This sassy salsa dancer really dug deep for her Demi Lovato song — perhaps too deep. While the judges appreciated her warrior spirit, Lionel warned her, “Your voice is extremely expressive — you never have to growl that much.” Katy also explained, “I don’t think you have to actit as much. Let your voice carry you.” After some coaching on her second song, Danielle received three yeses, but I worry if she’ll be able to keep self-correcting and overcome her penchant for melodrama onstage in Hollywood.

This Baltimore badass, who works with homeless and at-risk youth, sings “for people who don’t have voices of their own.” And she definitely seemed like woman of the people, positively oozing likability and natural talent. “You’ve got a vibe,” Katy purred. I personally thought Katyrah’s banging on her cajón — a

percussion instrument that she nicknamed “Layla” — distracted from what Luke called her pretty “little bird” voice, so I was glad when Luke told her, “The box is cute and all, but you don’t need the box!” Overall, I agreed with Lionel’s enthusiastic assessment: “It’s all about the presentation. … I am so excited about where you’re going to take this ride.”

This small-town Kentucky kid never fit in. After he dropped 60 pounds in two months — hoping that the weight loss would help with his self-esteem issues and school bullying but it didn’t — he became suicidal. But thankfully, music saved him. “Music is really the reason why I’m alive — and the reason that I live,” Brooks told the judges. Accompanying himself on piano for Gary Jules’s Donnie Darko version of Tears for Fears’ existential classic, he gave a simple, haunting performance, starting off tentative and timid and then masterfully, deliberately, slowly ramping up the drama. The judges were at rapt attention throughout. “I do like the reserved personality meets explosive vocals,” said Katy. “I love an experience, and that felt like an experience,” raved Luke. While Katy advised Brooks to “try to scale back any theater/Broadway stuff,” being theatrical always seemed to work for another Idol contestant who covered “Mad World,” Adam Lambert — so, I think Brooks should just continue to be himself. “I wish I could have told my younger self that it does get better,” Brooks said as he left with his golden ticket. (If you or someone you know needs help, please call the National Suicide Prevention Lifeline at 1-800-273-TALK).

Sage’s audition was not shown in full — which was surprising, considering how much the judges, especially Lionel, seemed to adore her. Katy compared this jazzy songbird to Joss Stone and Diana Krall, and I thought Sage was giving off Haley Reinhart vibes as well. Lionel even told Sage, “You brought a package — the look, the vibe, the voice, the style, the whole thing. … I do believe that this package is going to be a little eye-opener for the rest of the contestants.” I hope we get more than just a brief glimpse of Sage in Hollywood. My eyes (and ears) are ready for more.

This South Carolina foster kid — who bounced around to different homes during his childhood before his true father figure taught him how to write songs and play multiple instruments — was exposed to a lot of country music during his erratic upbringing, and it resonated with him deeply. It was interesting that a Black country singer like Maurice would cover a Morgan Wallen song, given Wallen’s racism controversy of the past year — but the judges didn’t comment on the song choice, and Maurice definitely made it his own. “You’ve got flavor and storytelling,” said Lionel. Maurice did have some bad (or just plain loud) habits developed from years of busking and trying to grab the attention of passers-by, but Luke mused, “Some of those signature things that you’re doing, if you could fine-tune them, they could really become something that sets you apart. … Maybe just calm down 10%.” Katy added, “I don’t think you need to try as hard when you’re in the room, especially if you have a mic,” but she and her fellow judges agreed that Maurice’s raw talent was “worth investigating.”

Scarlet tried out last year and received a golden ticket, but she decided to sit out Season 19 to focus on her education. While in the past the judges have admonished returning contestants who’ve rejected such a golden opportunity, they were all smiles when they recognized Scarlet (she did graduate with honors last year, after all). And while they didn’t seem totally impressed with Scarlet’s cute-but-forgettable Sara Bareilles/Ingrid Michaelson-lite original song this time around (“I think you need to pick songs that stir emotions,” Katy advised), they still loved her “super-super-commercial-sounding voice.” Katy declared, “I don’t think we made a mistake last time.”