To stir up even more publicity for its cruise collection—and incite jealously among its legion of fashion fans—Chanel tapped Sofia and Roman Coppola to direct a short film promoting its stopover at the Faena Hotel in Miami. (The runway show first took place on the beach in Monte Carlo back in May.) Set to the soundtrack of “This Town” by The Go-Go’s, the vintage-tinged vignettes showcase the coastal city’s greatest hits, including Ocean Drive, Art Deco architecture, sprawling beaches, and, as a finishing touch, the house’s iconic CCs scrawled on the sand. The lyrics say it all: “This town is our town / It is so glamorous / Bet you’d live here if you could / And be one of us.” 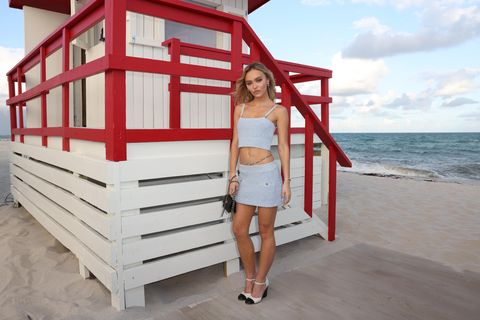 For the past 24 hours, everyone who wasn’t in South Florida probably wishes they were…for once. From the idyllic setting overlooking the ocean to the star-studded guest list (Lily Rose-Depp, Marion Cotillard, and Lori Harvey), performances (Nile Rodgers and Chic with a cameo by Pharrell Williams for “Get Lucky”), and spread (quintessential Florida fare like stone crab claws, Cuban sliders, and key lime pie), these were, to quote Rodgers wailing on the microphone, the good times. And that’s without factoring in the clothes.

Against the backdrop of red and white-striped umbrellas and chaise loungers, the collection blended old-world French glamour and athleticism—specifically, auto racing and racquet sports—with models holding biker helmets and toting quilted leather tennis bags over their shoulders. The silhouettes ran the gamut from jumpsuits to tailored suiting and, for the finale, an elegant long-sleeve sequin dress, but the retro-meets-motorsports theme becomes most apparent in the details—think: crochet racing gloves, dresses emblazoned with starter flags, and baseball caps in Chanel’s signature tweed. 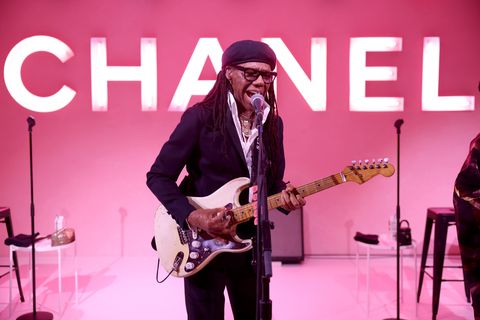 Nile Rodgers performs at the after-party.

Though originally shown in the French Riviera, the collection moves seamlessly to stateside shores. Perhaps not so coincidentally, Formula 1 was also held in Miami this year, further cementing the locale as the new Monaco. When asked why the resort destination was the ideal place for its replica cruise show the next day during a masterclass held at the Faena Forum, Bruno Pavlovsky, president of Chanel’s fashion activities and president of Chanel SAS, said, “Why Miami? Chanel loves Miami.” And really, what’s not to love? 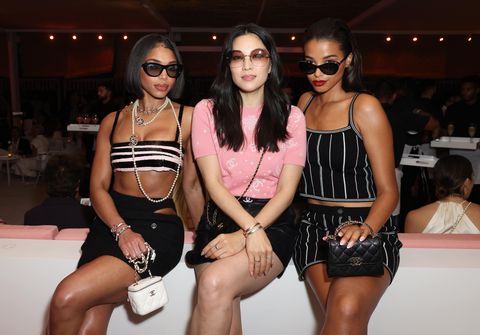 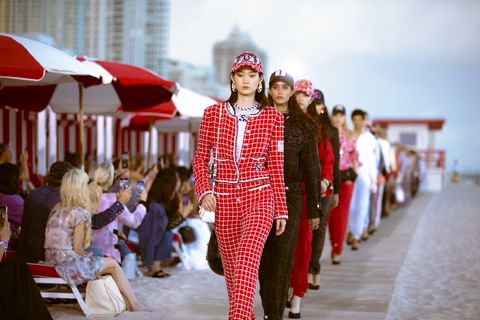 Claire Stern is the Deputy Editor of ELLE.com. Previously, she served as Editor at Bergdorf Goodman. Her interests include fashion, food, travel, music, Peloton, and The Hills—not necessarily in that order. She used to have a Harriet the Spy notebook and isn’t ashamed to admit it.