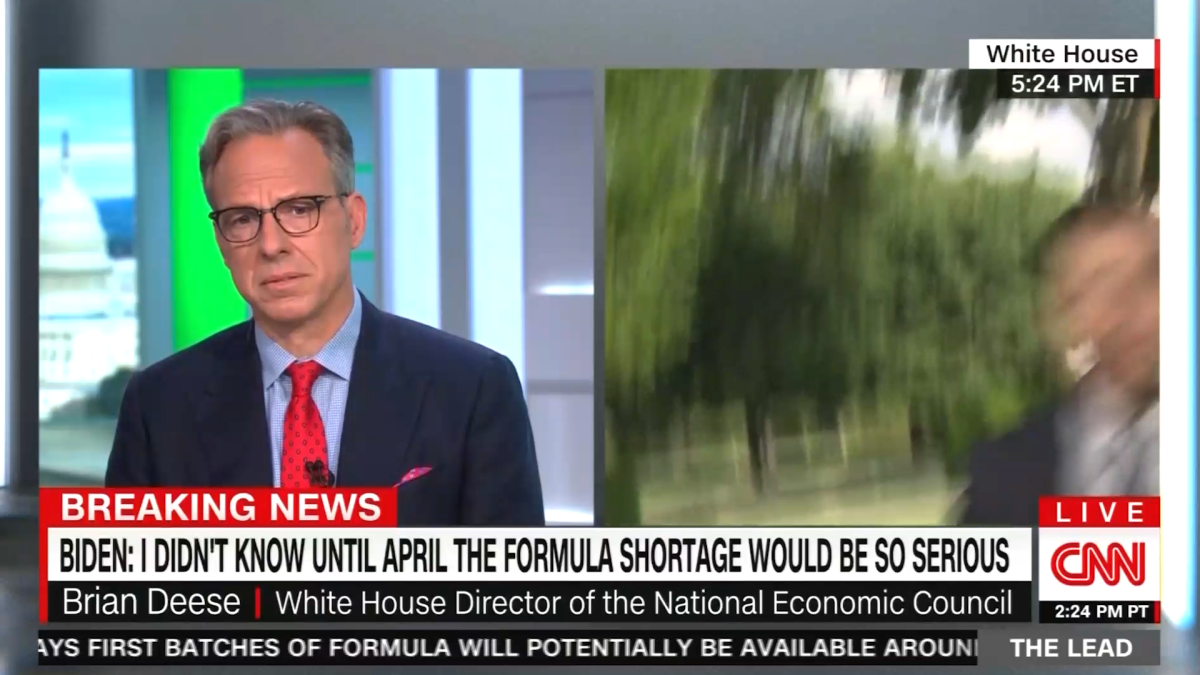 An interview with White House Director of the National Economic Council, Brian Deese, came to an abrupt and unexpected end on The Lead With Jake Tapper Wednesday. Tapper and Deese were discussing the shortage of baby formula in the United States following the shut down of a plant in Michigan earlier this year after the deaths of two infants who had consumed the formula it produced. Though the factory was closed in February, President Biden said Wednesday that he had only been informed of the seriousness of the problem in April. The interview was beginning to get contentious as Tapper pressed Deese for answers.

“So, the whistleblower complained in the fall, the FDA waited until December to act, waited until February to shut the plant down, President Biden didn’t find out about it until April. You don’t think any of that should have been done more quickly or sooner? You just think everything went exactly as it’s supposed to?” Tapper asked. He later added, “I don’t need the FDA to investigate itself to come to the judgment that they did not act quickly enough. And on behalf of all the frustrated moms and dads and guardians out there, I hope you don’t either.”

As Deese responded to Tapper, the camera, much like the tension, came crashing down.

“I think it is appropriate that they look at that timeline and understand what happened in that context,” Deese said. “But I also think that we need to take very seriously that…”

At that point, the camera began to fall, slowly at first, then faster as Deese tried to stop it. The feed went to black.

“Our camera fell down. Okay,” Tapper said, laughing. “Brian Deese, thank you so much.”

The Lead With Jake Tapper airs weeknights at 4 p.m. on CNN.

Watch Dr. Jill Biden open up about her own spelling bee failure and offer advice to kids: ‘Take risks’: