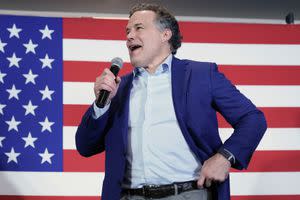 After 17 days of counting, recounting and court battles, McCormick conceded in the Pennsylvania U.S. Senate Republican primary race, making Dr. Oz the Republican on the ticket in November.

“With so much at stake and that margin so razor-thin, we’ve spent the last 17 days making sure every Republican vote was counted in a way that would result in the will of Pennsylvania voters being fulfilled,” McCormick said in his speech.

McCormick told his supporters that he’s 100% behind Dr. Oz in the fight against Lt. Gov. and Democratic nominee for Senate John Fetterman.

“I received a gracious phone call from David McCormick and am tremendously grateful for his pledge of support in the fall election. We share the goal of a brighter future for Pennsylvania and America. Now that our primary is over, we will make sure that this U.S. Senate seat does not fall into the hands of the radical left, led by John Fetterman.”

Fetterman is off the campaign trail after suffering a stroke days before the primary election. His cardiologist disclosed that he has cardiomyopathy, a condition where the heart muscle weakens and becomes enlarged, in addition to atrial fibrillation which caused his stroke. Fetterman’s wife, who’s on the campaign trail for him, says he’s taking his recovery extremely seriously.

Stay with Channel 11 for more details on the upcoming Senate race.