In many countries, as restrictions lift and freedoms are restored, there’s a general feeling that the pandemic is over. There is, however, still the significant concern that a dangerous new variant could emerge.

This happened when omicron arrived, but we got lucky with that one. Omicron turned out to be more transmissible, but mercifully it hasn’t caused an increase in severe disease in most countries where it is dominant.

But this wasn’t guaranteed. Variants crop up randomly, and new ones have the potential to be more dangerous than previous ones. Another has just arrived, and is currently going by the name deltacron. It is – as you can probably guess – a hybrid of delta and omicron, the two variants dominant most recently.

Deltacron’s story begins in mid-February, when scientists at the Institut Pasteur in Paris uploaded a genetic sequence of the coronavirus that looked very different from previous sequences. The virus sample had come from an elderly man in northern France and looked odd. Most of its genetic sequence was the same as delta’s, which was dominant worldwide up until late last year, but the part of the sequence that encodes the virus’s spike protein – a key part of its external structure, which it uses to get inside cells in the body – came from omicron.

By March, three further hybrid genetic sequences had been reported, this time in the US. There are now over 60 logged, across France, the Netherlands, Denmark, the US and the UK.

There may, however, be different deltacrons. Scientists at the Institut Pasteur have said the deltacron sequences reported in the UK and US have certain differences from those found in other countries. They’ve said that it might be necessary to add a number to these different forms of deltacron, to indicate which is which.

How these hybrids formed

It’s not unusual for viruses to mix and match parts of themselves if two different viruses infect one cell. This is called “recombination”, as one virus combines parts of its genetic sequence with parts from another related virus as it assembles copies of itself. It appears to happen at random during viral replication.

However, when there’s a transfer of power from one viral variant to another – with one variant becoming less common and another more so, meaning both are circulating in the population and there’s a chance for them to simultaneously infect people – the chance of recombination happening increases. This will have been the situation as omicron emerged to displace delta as the most dominant form worldwide.

Recombination usually creates a new virus that isn’t viable, as the mixing of different genes can interfere with the virus’s ability to make the proteins it needs to survive. But sometimes one does survive, and that appears to be what’s happened with deltacron.

Indeed, as the deltacron hybrids found in the US/UK appear to be different from those found in mainland Europe, it’s possible that this has happened multiple times separately.

A chip off the old block?

At the moment it’s hard to say in what ways deltacron will resemble its parents. Delta and omicron are quite different viruses. They differ in how they infect cells and how they evade immunity. We still don’t know enough about deltacron to be able to tell how different it’s going to be to either.

Because it’s been found in multiple nearby countries, it’s likely that deltacron can spread. However, omicron itself is continuing to spread widely in Europe, so it’s still the variant we need to be watching carefully right now. 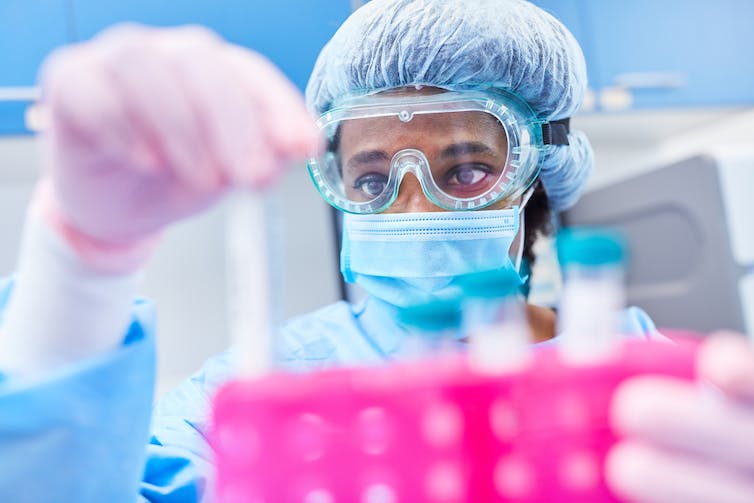 The emergence of deltacron underlines the need for testing and sequencing of the virus to continue worldwide.True Touch Lifestyle/Shutterstock

Time will tell if deltacron will displace omicron, and whether deltacron will be any better at evading immunity and if it will cause more severe disease. There are currently too few deltacron cases to draw any conclusions on these issues. What we need are experiments to determine the properties of deltacron – scientists have started that process and have been able to infect cells with it, so hopefully we’ll have answers in time.

In the meantime, we need to keep an eye on it. The fact that deltacron has probably spread across borders emphasises the need for ongoing genomic surveillance to keep tabs on how the virus is changing and moving. As the coronavirus is continuing to spread widely and infect large numbers of people, it’s likely that more variants will emerge – including through recombination.

We can, though, be somewhat confident that prior infection with other variants, as well as vaccination, will offer protection from severe disease should deltacron begin to dominate. We know that vaccines, which are based on the original Wuhan strain of the virus, also protect against severe disease with the more recent variants. Time will tell whether delta and omicron have produced a wild child for us to worry about.

This article is republished from The Conversation under a Creative Commons license. Read the original article.