Several months back, during a staycation in Brooklyn, I came across a bar of soap from Dr. Squatch that I just had to try. The packaging caught my attention first: a good-size square bar with a drawing of what I thought was a wide-eyed monkey, smoking a pipe while dressed in a sports coat and tie. It gave major ’90s Nickelodeon vibes, something I didn’t expect to see at a five-star joint, even in Brooklyn. Second was the name: Wood Barrel Bourbon. For me, anything bourbon is always a great idea, no matter the time or occasion. Last but not least was the scent—more on that in a bit.

Dr. Squatch has been around for almost a decade, but I first heard about it last year via social media, primarily TikTok. Through memes and videos that also gave big ’90s Nickelodeon vibes—complete with green slime—the brand sought to entertain and educate its audience. With humor, it extolled the skin-replenishing qualities of its natural formulas and how it vastly differs from other products on the market, how most bars and body washes are actually detergents, solutions made of surfactants and perfumes. This marketing strategy, coupled with the steady uptick of men’s interest in grooming, has seen the company grow exponentially in the last few years. Frankly, I wasn’t a fan of juvenile gags and green slime in the ’90s, and I’m certainly not a fan of them now. But I am a fan of quality products that enhance my shower experience. And the Wood Barrel Bourbon definitely does that.

The first thing I do after I set up the Wifi in my hotel room is take a nice hot shower. I want to cleanse myself of all the filth from traveling and put my body at ease. Normally, there’ll be a small bottle of shampoo and body wash available, along with soap for washing hands. Which is why, during my staycation in Brooklyn, I was delighted to see a bar intended for the body—a rarity. And after I took a whiff of the Wood Barrel Bourbon, my delight only increased.

The scent is a combination of guaiac wood, patchouli, and clove. There’s an earthiness that’s not too earthy, a sweetness that’s not too sweet, and a smokiness that’s not too smokey. The aroma does kind of smell like a chilled bourbon. And it’s strong in the best way, transcending the packaging. In fact, after I left a few bars on my desk for a couple of days, the smell permeated throughout my (small) room, as if it were a scented candle. But it works even better in the shower, so much so that I’ll linger longer just to soak in the scent. 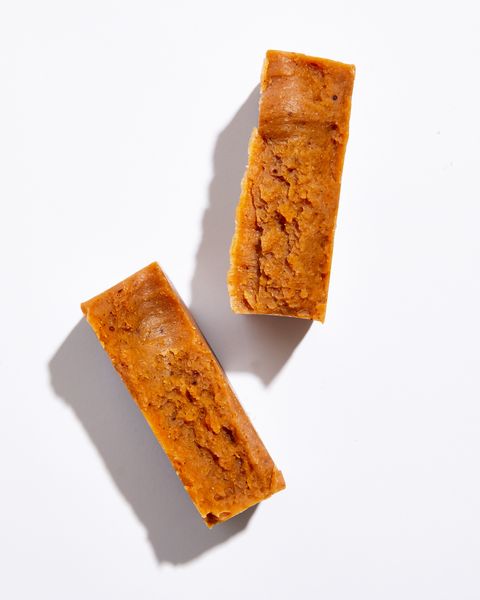 Another thing that’s often lacking in hotel rooms is a loofah or substantial washcloth. I want to feel like I really scrubbed my buddy down to the nitty gritties, and no amount of foam build-up will replace that. But with Dr. Squatch soaps, especially the Wood Barrel Bourbon, there’s no need for an exfoliating shower accessory. This is because the brand has added Jimmy Red corn—yes, the same sweet, nutty, richly hued corn that bootleggers used to make bourbon way back when. When I put the soap on my skin for the first time, I was pleasantly surprised to feel a subtle prickle, almost like soft bristles on a hair brush. Oh, and to make sure that everything feels smooth, Dr. Squatch has also added brewer’s yeast, which is known to alleviate skin irritation. 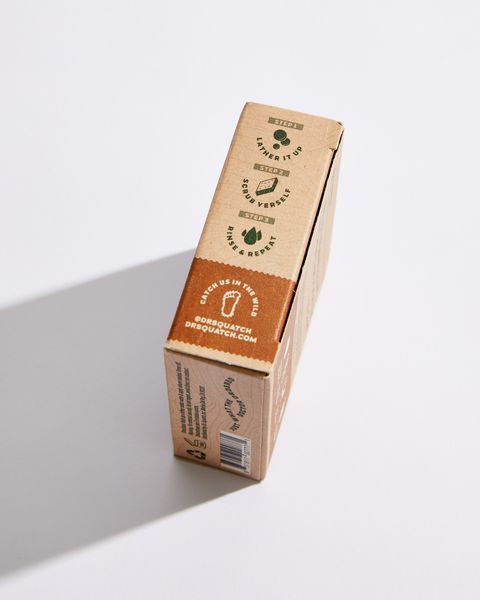 Yeast, corn, clove: sounds like baking is on the agenda. Indeed, Dr. Squatch makes it a point to use ingredients that are as natural as possible—basically, real soap. As I said earlier, most bars are actually detergents, which means that they are made of synthetic chemicals that, more often than not, result in dry, flaky skin. Actual soap, on the other hand, is made of organic fats and glycerin, which moisturize and cleanse your body without causing irritation.

When Jack Haldrup started mixing formulas in his garage in 2013, his goal was to create a product that didn’t inflame his psoriasis, one that all could use and really enjoy. There are many companies that offer the same shebang, of course, but their stuff is usually flowery and costly. Dr. Squatch, however, has more rugged offerings that offer an impressive amount of best bang for your buck. It’s as effective as it is affordable, which is elusive, like loofahs in a hotel bathroom or seeing the Sasquatch.

Supposedly, this is how Dr. Squatch got its name. The wide-eyed monkey on the packaging is actually Bigfoot with a medical degree.

Barry Samaha is the style commerce editor at Esquire, where he covers all things fashion and grooming. Previously, he was an editor at Harper’s Bazaar, Surface, and WWD, along with overseeing editorial content at Tod’s Group. He has also written for The Daily Beast, Coveteur, Departures, Paper, Bustle Group, Forbes, and many more. He is based in New York City and can’t seem to find enough closet space for all his shoes.