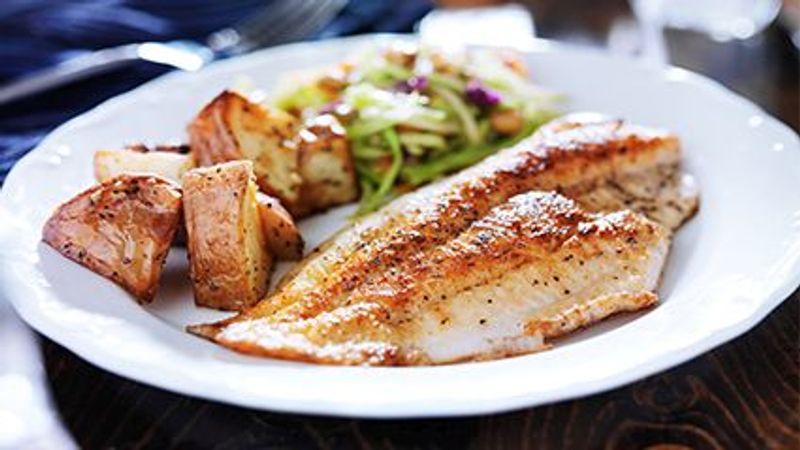 You’ve added fish to your diet to eat healthy, but now a new study delivers some bad news: Fish lovers may have a slightly increased risk of melanoma.

Researchers followed over 490,000 older Americans and found the 20% with the highest intake had about a one-quarter higher risk of developing the disease over 15 years, versus the 20% with the lowest fish consumption.

Still, experts stressed the findings show only a correlation, and cannot pin the blame squarely on seafood.

An oncology dietitian who was not involved with the study emphasized the “bigger picture.”

Because of its benefits — including links to better heart and brain health — experts generally recommend people strive for two 4-ounce servings of fish per week, noted Bragagnini, who is also a spokesperson for the Academy of Nutrition and Dietetics.

Fish can be a “great alternative,” she said, for people looking to limit red and processed meats — which are tied to higher risks of certain cancers, including colon and rectal cancers.

So why would fish be linked to melanoma, a disease most closely related to risk factors like sunburns and family history?

It’s not clear, said lead researcher Eunyoung Cho. But one hypothesis is that it’s not the fish, but contaminants — like mercury and PCBs — that can exist at relatively high levels in some fish.

Past research has linked mercury exposure to a higher risks of melanoma and other skin cancers, noted Cho, an associate professor at Brown University’s Warren Alpert Medical School, in Providence, R.I.

However, she said, the contaminant theory is just that. “This is the first study to show this association,” Cho said. “We need more research to replicate these findings before we can make any dietary recommendations.”

The findings, published June 9 in the journal Cancer Causes and Control, are based on 491,000 Americans aged 50 to 71 who were followed for 15 years. At the outset, they completed questionnaires on diet, exercise, and smoking and drinking habits.

Over the study period, just over 5,000 participants were diagnosed with malignant melanoma, while almost 3,300 developed melanoma in situ — where “pre-cancerous” melanoma cells are on the top layer of skin but have not penetrated the deeper layers.

Cho’s team found that people in the top 20% for fish intake had a 22% greater risk of malignant melanoma, and a 28% higher risk of melanoma in situ, versus participants who ate the least fish. That top group typically downed nearly 43 grams of fish per day.

Those higher risks held when the researchers accounted for other lifestyle habits, race, education level and where people lived.

However, the study lacked details on people’s personal sun habits, said Dr. William Dahut, chief scientific officer for the American Cancer Society. It’s not clear, he noted, whether fish lovers were more likely to have a “beach house” or otherwise spend time outdoors.

Dahut, who was not involved in the study, called it “interesting,” and worthy of a deeper dive.

“But I wouldn’t tell people not to eat fish because of melanoma risk,” he said.

Dahut also pointed to a puzzling finding: People who reported eating more non-fried fish or canned tuna had an increased risk of malignant melanoma. But those who ate a lot of fried fish actually had a decreased risk.

Self-examination is important in the detection of skin cancer. See Answer

Both Cho and Bragagnini agreed that finding is hard to explain. It’s possible, Cho speculated, that the type of fish matters; she said future studies could look at whether particular fish varieties are tied to higher melanoma risk.

For now, Bragagnini recommended focusing on overall diet, including getting plenty of plants foods like vegetables, fruits, beans, nuts and fiber-rich grains. As for fish, she advised baking or steaming it rather than deep-frying, which can deplete the “good” fats.

When it comes to malignant melanoma, Dahut said the primary prevention tactics remain the same: limiting exposure to ultraviolet rays — from the sun or tanning beds — and checking the skin for new growths or changes to existing moles.

The American Cancer Society has advice on diet and lifestyle.