Something new is here from Eli Roth. No, it’s not Hostel: Part III or another sequel to Cabin Fever, or any other regular old flat screen film. Eli Roth’s Haunted House: Trick-VR-Treat is a creature we’ve never encountered before: Part Grimms’ fairy tale, part haunted-house adventure, all wrapped up in a thirty-minute virtual reality experience. Roth took his unique flair for the macabre and applied it to virtual reality. Trick-VR-Treat is a collaborative effort from CryptTV, Cream Productions, and Light Sail VR. It premiered on Meta Horizon Worlds and Meta Quest TV on October 21.

Strap on a Meta Quest 2 and become the protagonist in your own Eli Roth directed haunt. The experience will be in Meta Horizon Worlds and Meta Quest TV. If you don’t have a VR headset just laying around, you can still get your scare on by tuning into the experience on Crypt TV’s Facebook and Instagram.

You’ll find yourself in a neighborhood trick-or-treating scene that is deceptively familiar but insidiously frightening. The experience starts off innocent enough with fellow trick or treaters dressed as Kim Kardashian, Pete Davidson, and other pop culture icons, but just like in a Roth feature film, things quickly spiral out of control into a bloody haunted house Halloween fever dream. Not to spoil anything, but there are haunted dolls around every corner, Vanessa Hudgens in a surprise dual role, rooms drowning in Halloween candy and creepy apparitions. It can be hard to know where to direct your attention. And that, says Roth, was his intention. We talked to Roth about haunted houses both real and fake.

This conversation has been edited for clarity. 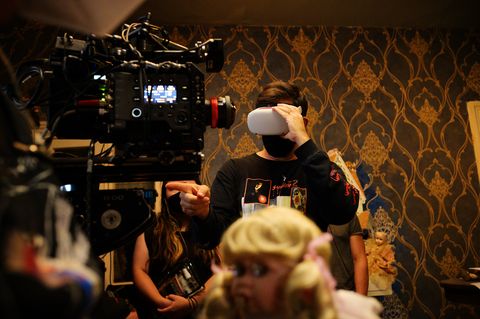 What compelled you to make a VR experience? In a haunted house?

I once built a haunted house in Las Vegas. It was so much fun! But it was open for a brief period of time. It wasn’t sustainable. I love Halloween Horror Nights, and I love the Goretorium. Part of the fun is it’s like a festival, you have to be there to go through it. The nice thing with horror movies is that everyone has their own experience going on the scare, that communal scare. With VR, I thought, It doesn’t matter if you’re in Japan or Germany or New Jersey, everyone can go in and have that experience.

I read that the place where you filmed this project was haunted, what was your experience like there?

Well, I love shooting in haunted locations. I always think you’re capturing some kind of energy that hopefully is happy to have you there. There are three spirits that live at the Auchmar House in Ontario. We found this out while we were shooting. I mean, you walk in and you feel something there. You do not feel like you’re alone.

I remember we were telling the cast about the spirits and a bottle falls off the shelf. The cast turned around, and we were like, “Did you bump into it?” They were like, “No, I was literally standing here. I was half a foot away from the shelf. It just fell.”

Vanessa Hudgens loved it, because she’s all about investigating spirits and ghosts and all things witchy. Vanessa was like, “I can’t believe I didn’t bring my spirit box.” She has all the equipment to read the levels of spirits and all that. But we felt great while we were shooting. Sometimes you’d get a chill, but we had huge smiles the whole time. 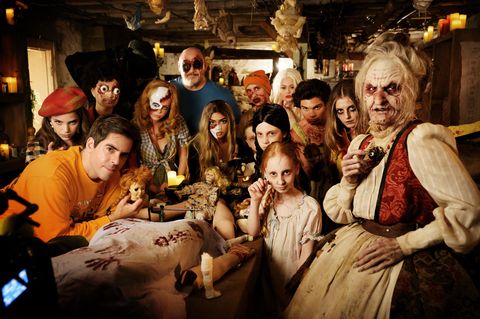 Have you ever seen a ghost?

Never. There were times when I thought I did, but never that one definitive encounter that proved it for me.

Do you believe in them?

I am totally open to it. I definitely think that our energy doesn’t just leave, that it gets recycled in one form or another. So I think it’s possible. My wife and I were living in a 13th century Knights Templar villa outside Florence, and she wouldn’t go down to the basement. You went down there, and that energy was heavy. And it wasn’t just because it was this dank basement of a villa built in 1250. We had to sage the whole house to clean the energy out.

At first, I was nervous to experience Trick-VR-Treat. I’m actually scared of haunted houses. But I thought it was really fun to explore one in my own home.

That’s exactly what I was hoping for. I want people to be thrilled, scared, and excited—but in the safety of their own homes. In a weird way, you can let yourself go and get really, really scared. But you can pull off the headset at any time. Whereas in a haunted house, you have to physically get out. 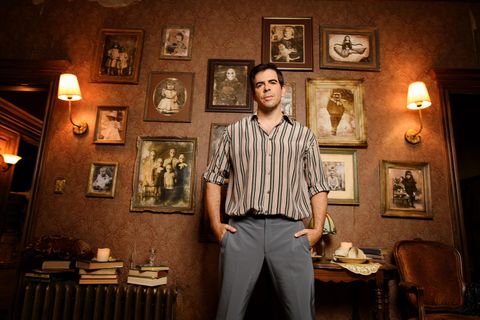 You seem to like pushing the ways you tell stories.

I like experimenting. And the thing about VR, it’s the closest waking experience to being in a dream, and when you wake up, swearing it was real. You’re like, Oh, this is what it would be like if I was next to Vanessa Hudgens. And when you’re on the table and she’s a witch, you’re like, Yeah, this is exactly what it would feel like to be in this room. You allow your imagination to take over.

I think VR is the closest I’d do to extreme horror experiences. When I heard about your project, I thought, This is kind of like going to an extreme haunted house. Like McKamey Manor, but in VR form.

There’s something for everybody, and I think what Russ McKamey does, he does really well. There are people whose whole life experience is trying to make it through McKamey Manor. They need it. They love it. It’s not for everybody, though. I don’t like to go through anything where I have to sign a lot of waivers. They go extra-hard when I’m in there, anyway.

Oh, Eli’s going through. Let’s really scare him. I get the extreme version of any haunt I go into. If they know it’s me, or the word spreads that I’m standing in line, they dial it up. They’ll follow me out of the haunted house. They walk around the park, following me! So I already get the extreme version whether I want it or not.

There’s a trend on Twitter right now that a lot of people are doing called 13 Horror Movies To Get To Know Me Better. I would love to hear yours.

I think people know me pretty well from watching my movies. Cabin Fever is about being 22. Hostel‘s about being 32. And then Green Inferno is about my feelings on people that get involved in causes they know nothing about. Knock Knock is the fear of moves, a fear of marriage. House with a Clock in Its Walls is about fear of fatherhood and learning to accept responsibility that you avoided your whole life. Everything has a different theme to it. So if you really want to know me, you can watch my movies, and you certainly know where I stand on things.

Sirena He is an editorial assistant and writer who focuses on media and culture. She is a lover of horror films and believes in the healing power of storytelling.