Showgoers arriving at the Palais Garnier in Paris for Nanushka’s fall 2022 presentation were greeted by haunting strains of Ukraine’s national anthem. The somber soundtrack was provided by a string quartet from Brussels-based classical outfit Echo Collective. They solemnly played as models took turns on revolving plinths in the venue’s colonnaded rotunda.

As the show of solidarity played out front of house, some tough commercial decision-making and a program of practical support was well underway behind the scenes. Among the very first brands to make such an overt political move, Nanushka had already decided to suspend business arrangements with its Russian wholesale partners, putting deliveries on hold and halting further orders.

“It was not a political decision⁠—it is the fact that we do not want to directly or indirectly participate in financing trade in Russia, and the secondary consequence of selling luxury products to the Russian market, because it profits,” Nanushka CEO Peter Baldaszti, who’s also the CEO of its parent company, Vanguards, tells ELLE.com. “Based on the values of our brand, we just can’t do this.” Baldaszti has even gone a step further and stopped online shipments to customers in Russia altogether.

Since Nanushka’s announcement, luxury groups Kering, LVMH, and Richemont, mass market retailers like Inditex and H&M Group, and brands across the spectrum including Chanel, Hermès, Acne, and Ganni both closed their stores and suspended activities in the region. Donations have also poured in from one and all—LVMH to the International Committee of the Red Cross to the tune of almost $5.5 million.

“The fact that we are a smaller company allows us to be more agile and make decisions much faster,” Baldaszti adds, explaining why he was able to take action with such immediacy. “The complexity of the decision is hugely different when you directly operate stores in the country and are responsible for your employees.” The crisis also holds a profound personal resonance for the Budapest-based label. “We have a different perspective; I was born in 1985 and [Nanushka creative director] Sandra [Sandor], was born in 1982,” he said. “She was eight years old when the Russian army left Hungary after almost 40 years of invasion and occupation.” 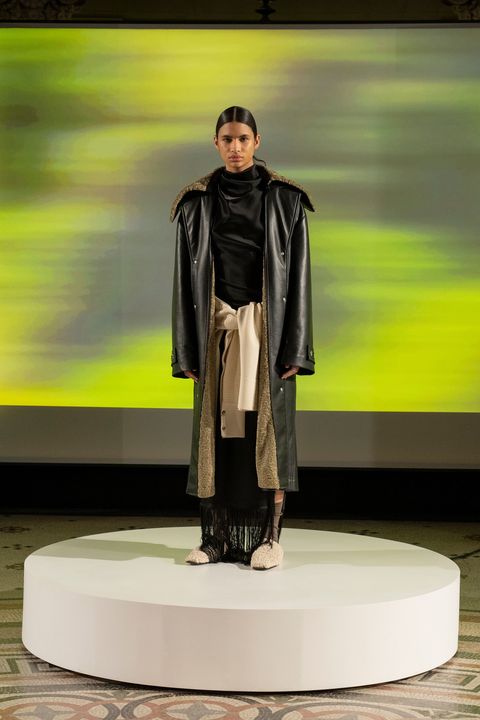 A look from Nanushka’s fall 2022 collection.

Together with the Vanguards, Nanushka is partnering with the Hungarian Charity Service of the Order of Malta to provide practical support for refugees fleeing its war-torn neighbor. “We are establishing two hubs in Hungary, one near the border with Ukraine and one in Budapest,” Baldaszti says. They are reserving hotel rooms and hostels, donating food and clothing, providing transport to and within Budapest, and enlisting the services of interpreters to help navigate the situation. They are also extending support to members of the Ukrainian fashion industry to help them maintain their businesses—providing them with a place to work and manufacturing capabilities, plus access to raw materials and resources.

Though cult Georgian label Situationist, which counts supermodel Bella Hadid as a fan, does not have Vanguards’s financial clout, it was still determined to help. Co-founder Davit Giorgadze says that his brand would host members of the Ukrainian fashion community at its Tbilisi atelier. “We are tiny, but we’re still hoping to host five to 10 people a week,” he says. In fact, Hadid, her sister Gigi, Kaia Gerber, and other high-profile models have pledged to donate a portion of (or in Gigi’s case, all) money earned walking in the shows to support Ukrainian organizations.

Over the course of Fashion Month, many other instances of support occurred both on and off the runways. Even before the invasion, when tensions between Russia and Ukraine were already on the rise, Kyiv designer Svitlana Bevza closed her New York Fashion Week show with a projection of the Ukrainian flag.

During Milan Fashion Week, when the war broke out in earnest, protesters congregated outside shows including Gucci, Prada, Versace, and Giorgio Armani, calling attention to the conflict and rallying people to take action. Citing the “unfolding tragedy,” Giorgio Armani presented his collection in silence, while Paris’s Fédération de la Haute Couture et de la Mode issued a statement urging attendees to “experience the shows of the coming days with solemnity, and in reflection of these dark hours.” 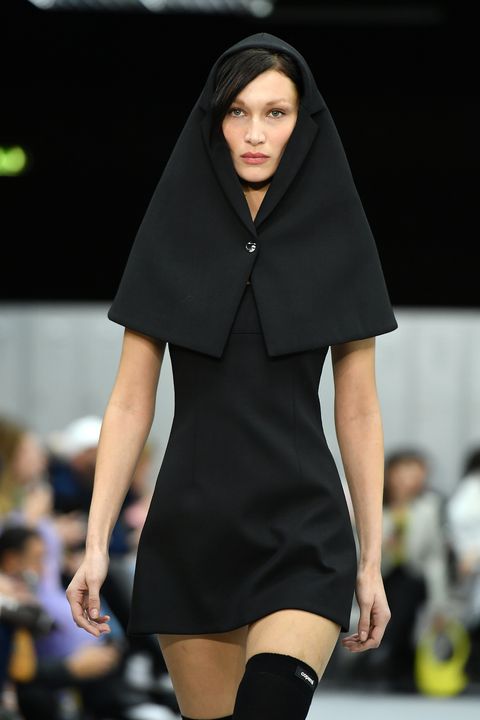 In Paris, Coperni designers Sébastien Meyer and Arnaud Vaillant, whose show featured both Hadids, dedicated their collection to the women of Kyiv-based atelier Cap Est Sarl, with whom they work; Koché designer Christelle Kocher and Isabel Marant respectively wore a floral brooch and sweater in the colors of the Ukrainian flag when they came out to take their final bows.

Ukrainian designer Lilia Litkovskaya eschewed displaying her own collection at Paris’s Tranoi trade show in favor of 45 QR codes linking to fellow Ukrainian creatives currently trapped in the country. And Fashion search engine Tagwalk has been keeping busy on the ground coordinating donations of necessities from painkillers to women’s hygiene products, inviting people to drop them at their offices for delivery to trucks bound for refugee reception centers in Poland.

As she explained via text, Tagwalk founder Alexandra Van Houtte was prompted to take action by one of her developers who is half Russian and half Ukrainian. “We saw how distraught she was and how much was needed,” she says. “The only thing I could offer was visibility and a place to stock all of the amenities in the center of Paris. Whether it was Fashion Month or not didn’t even occur to me.”

“They made it so easy,” adds Marion Arbellot-Repaire, co-founder of emerging label Minuit. “Even though we are a team of only four people, we stopped everything, went to the supermarket, bought everything we could, and sent it over by courier. Perhaps it’s not much, but we wanted to do what was possible.”

The virtual fashion world has also stepped up. Digital-only outfit DressX, founded by Ukrainians Daria Shapovalova and Natalia Modenova, created an entirely virtual clothing collection in the colors of the Ukrainian flag, with proceeds helping to advance the country’s war effort.

Kering-owned luxury behemoth Balenciaga deployed its 12.8 million strong Instagram following to bolster the Ukrainian cause and disseminate verified information as the conflict unfolds. When the news hit a fever pitch, the luxury house removed all previous content in favor of a single post announcing its financial partnership with the World Food Programme, and its Instagram Stories have since became a vehicle for official Reuters news. 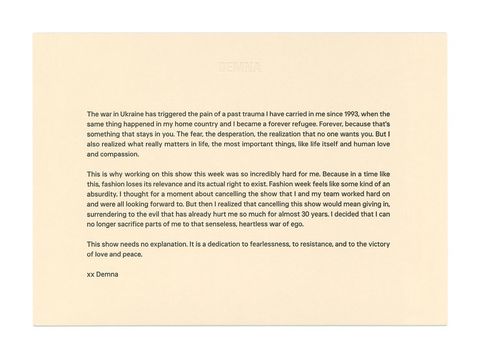 The fact that creative director Demna Gvasalia grew up in Georgia—when the country was still under Soviet rule—was the catalyst for activism. As the designer wrote in his show notes, “The war in Ukraine has triggered the pain of a past trauma I have carried in me since 1993 when the same thing happened in my home country and I became a forever refugee.” He had conflicted emotions about pressing ahead with his show, he continued—“at a time like this… Fashion Week feels like some kind of an absurdity”—but ultimately decided that cancelling it would mean “surrendering to the evil that has already hurt me so much for almost 30 years.” Each guests found a T-shirt in the colors of the Ukrainian flag on their seat, and Gvasalia dedicated the show, where models trudged through the snow and wind, “to fearlessness, to resistance and to the victory of love and peace.”

Perhaps Baldaszti summed it up best. “Companies have a responsibility to the society from which they benefit—that is just a basic principle—but I think fashion has a particular responsibility,” he says. “By definition, people are following fashion and other companies with larger financial assets are looking at them for inspiration. You have to show an example and inspire others to behave in a certain way.”