Sometimes you meet a person and you can tell that what you’re getting from them is about one tenth of the thoughts they have in their head. They speak quickly, but not quickly enough; their brain is just faster than their mouth. I know it when I see it because I’m afflicted with this same condition (just ask my wife). This week’s subject, Duckwrth, contains an abundance of thoughts and inspirations, and has written a plethora of genre-defying and energetic music to much acclaim. As you’ll see through the photos, Duckwrth’s personal style, an amalgam of that energy and confidence, defies those same boundaries, making for a wholly unique and unphased artist. He’s simply set out to do his own thing.

Today, he released his new EP, Chrome Bull. I sat down with him in the midst of his headlining tour and final release tweaks to discuss how ‘70s bands ranging from Led Zeppelin to Earth, Wind & Fire inspired his style, sneaking under the kitchen table to skip out on homework and listen to his dad’s band, psychedelic mushroom trips, the difference between style and fashion, channeling a Hey Arnold character’s uniform, and plenty more. 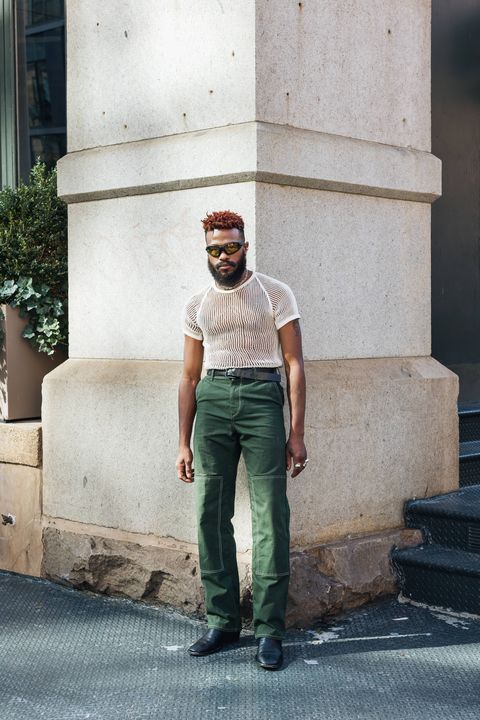 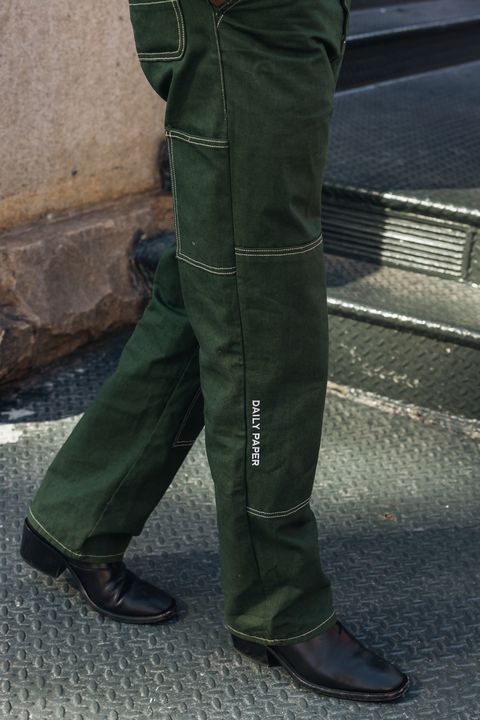 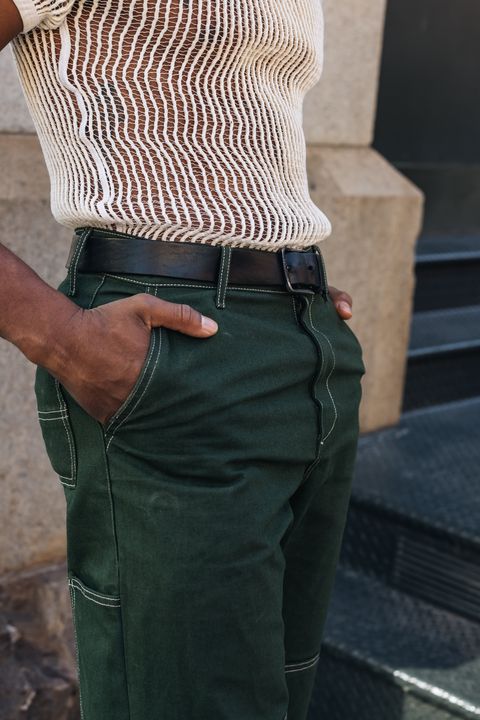 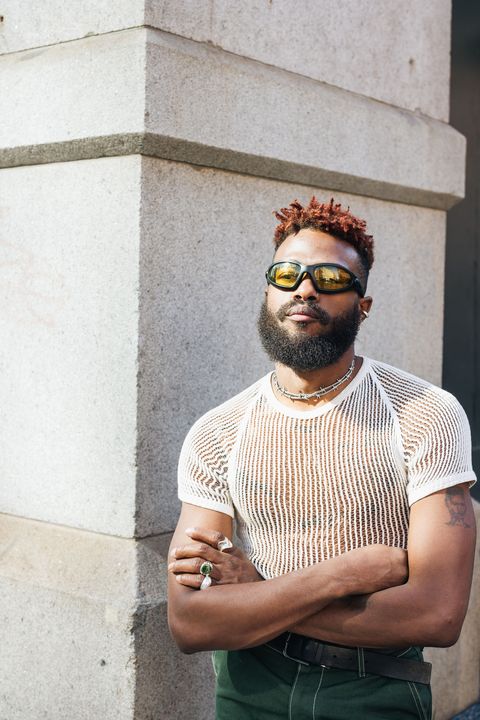 Tell me about what impacts and influences you as an artist. How are you shaped by your past and where do you draw inspiration from now?

When I was young, as a teenager in South Central, my lens was very small, but I knew that there was such a vast world out there and I wanted to be in the realm of creativity, whether it be music or fashion. I was gravitating towards the seventies and my early inspirations were Zeppelin, Hendrix, and Black Sabbath. And not even just for the music itself; it was also about the fashion, man. They were way more daring in the seventies. Even Earth, Wind & Fire, you see them with a belly top, some shoulder pads, some flare pants, and some platform heels. I always appreciated how bold and fearless they were. My biggest inspiration is always stemming from the seventies. In a modern sense, I take the boldness of the seventies and bring that forward into today. It shapes my music, how I perform, the garments I put together. Just be a little bit more daring.

What were you doing prior to making music? Also, I read something online about you having an important mushroom trip. Can you tell me about that, too?

I was at college doing graphic design. I did four years and then after that I joined this art collective called ThemHellas. We moved into this warehouse and it was photographers, directors, graffiti artists, music, silk screening, drugs, parties, the whole nine. It was such an experimental moment in my life. And yeah, I went on a crazy shroom trip. It was three months of just shrooms, literally every other day. 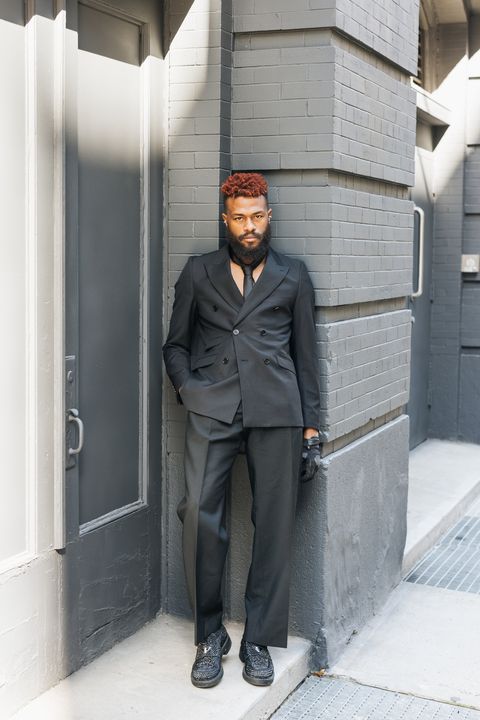 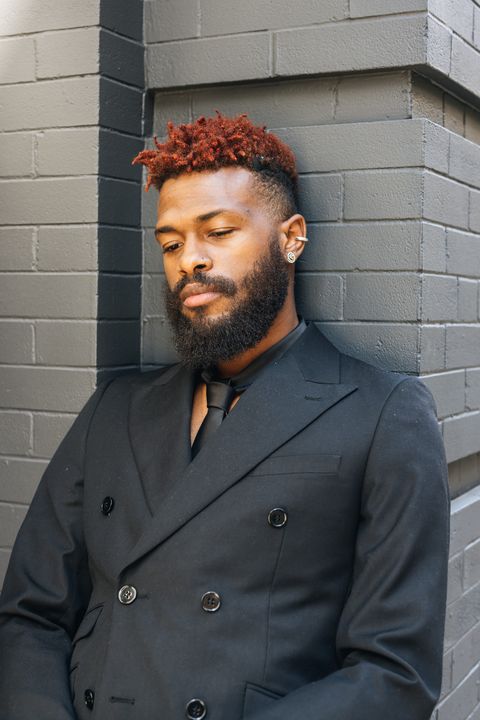 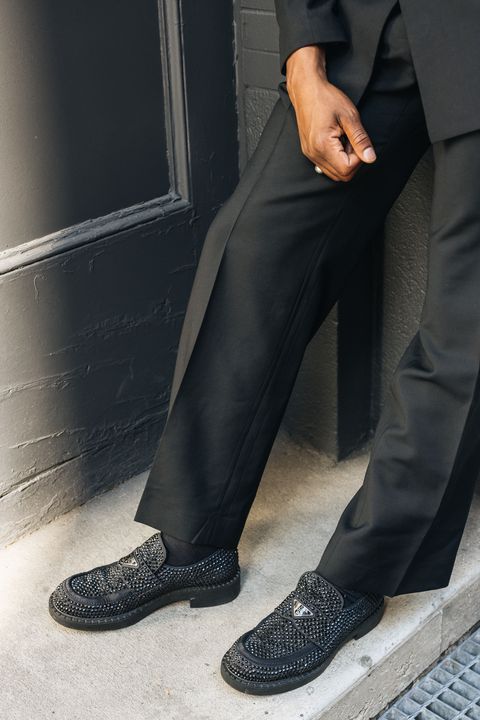 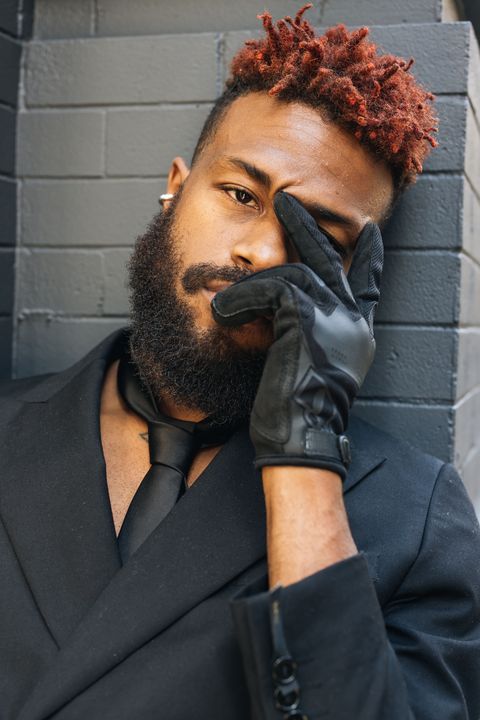 Sometime it’s peak. Sometime it was chill. I remember there was a skate park across the street and my crazy ass—I think it was the second time I took shrooms—they had this big bowl and I was skating, fully streamed out. That was a wild experience. It felt like I was surfing waves. Then I fell really hard and I just kind of laid there and took it in. It was great. I guess it was just being in San Francisco once again, going back to the seventies, I felt like that whole seventies psychedelic movement was in San Francisco. And I was like, “I’m going to go there and I’m going to turn into an alien.”

Do you remember when you first fell in love with music?

My dad is a gospel player. He plays keys and he had a gospel band and they were always rehearsing in the living room. I couldn’t even really do my math homework cause it’s just so much stuff happening. But I remember my mom wouldn’t let me go to the living room because they were rehearsing and I needed to finish my homework. One time, I snuck out of my room and hid under the table in the dining room, near the living room. For some reason the dining room had no lights on, so it made it easier to sneak. I just watched my dad and his band rehearse and I was blown away. The live instrumentation, it was so close to me. 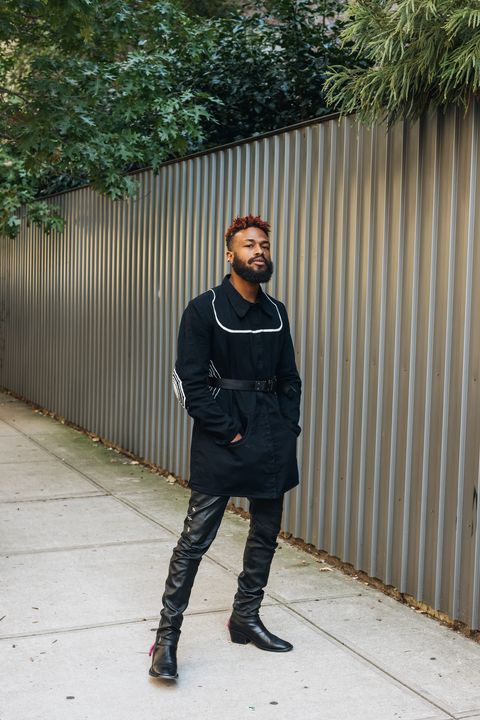 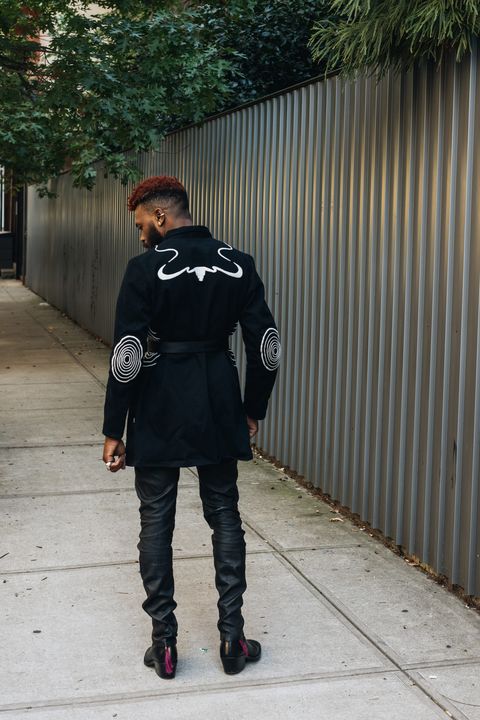 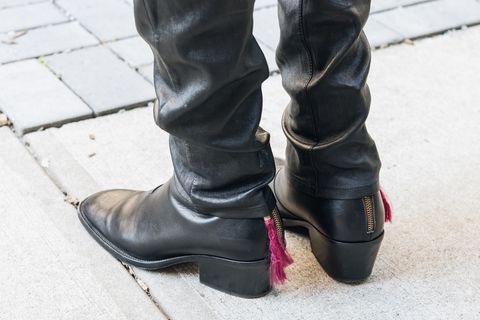 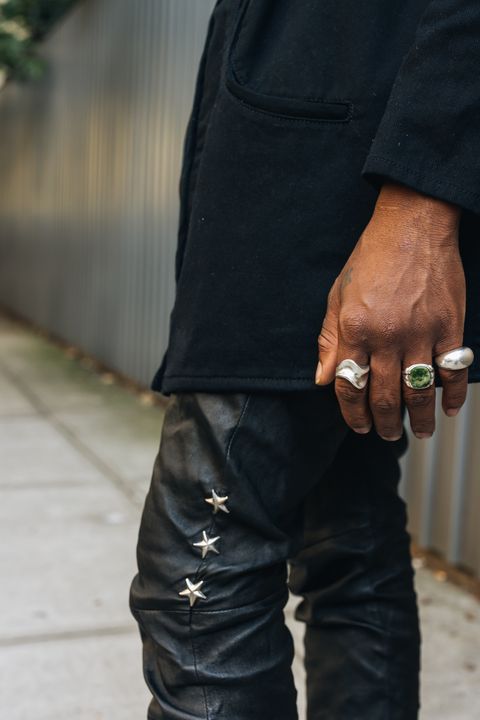 With this in mind, when was the first time you knew you wanted to make music?

I was rapping in high school, but I don’t know if I was taken seriously. When I started to accidentally make music in college, once again, it was just for fun. It was infectious. It was the first time we performed. I was in this group, I’m not going to say the name, but I was in this rap group and we performed at our little college club. We had a faux club for the students and there were maybe fifteen people in there and we were rapping. I don’t know, I felt high. I was sober, but I felt high. It tripped me out. I was like, “I want more of this. I want to do this more. Maybe I can add this to my life and, I don’t know, make a career out of it.” I kept doing it and it kept feeling amazing. The biggest thing was performing. Making the music was always fun, but actually seeing people’s responses—immediate responses—and seeing how you use your instrument and how that can make somebody sway their body or change their emotions and feelings. It’s trippy.

What lessons have you learned both as an artist and as a person from your first release to now, to headlining your own tour? 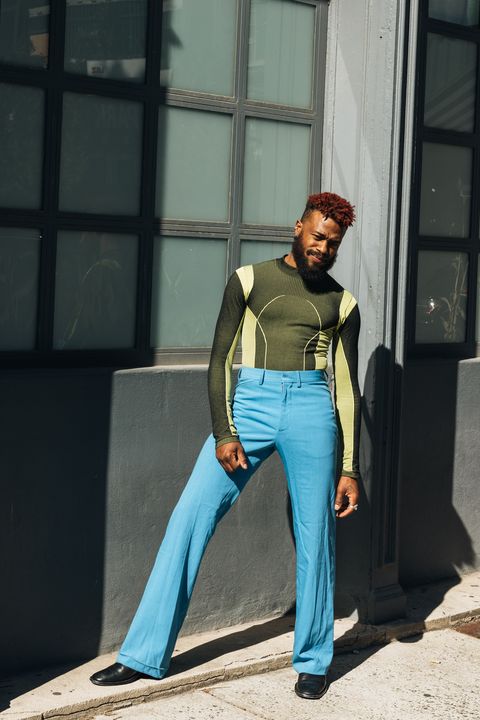 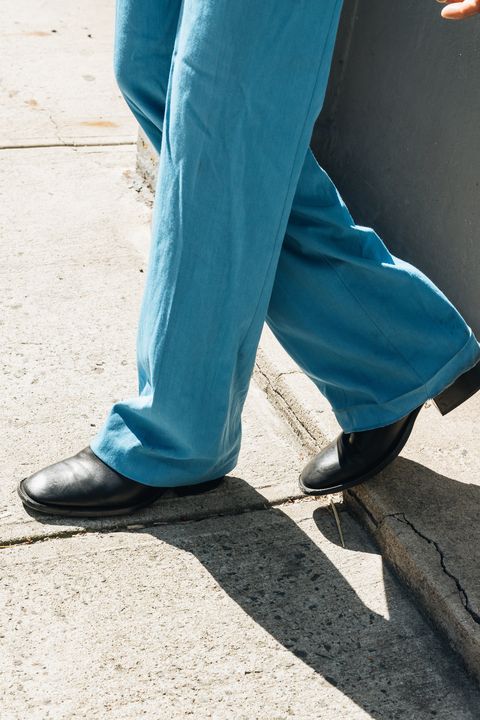 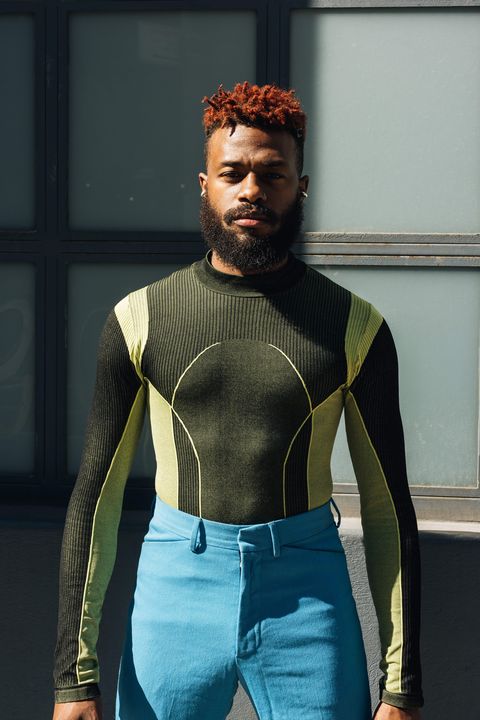 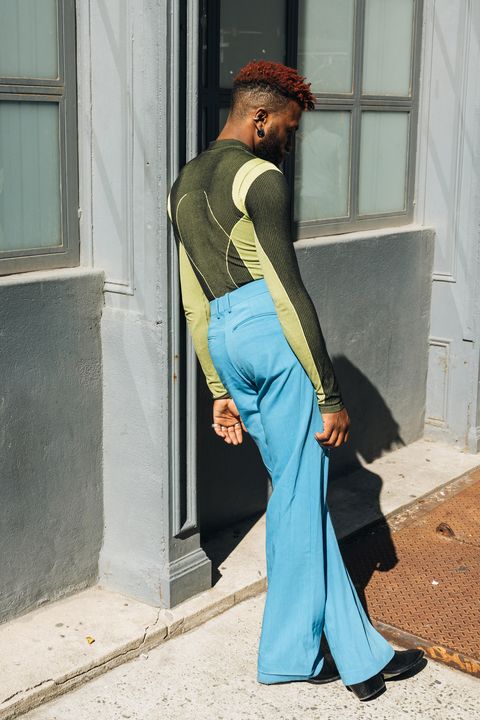 What do style and fashion mean to you?

Nothing… No, I’m kidding. Style and fashion? Let me think about the difference between style and fashion. ‘Cause fashion is more garment related, so it’s what you wear, style is kind of your essence, because you can wear fashion but you’re not stylish. Style is an outward expression of your inner. This is definitely who I am on the inside. For some people, it’s not that. I was watching this documentary about normcore.

They have a documentary about it?

They have a slight documentary about normcore and how it got its whole motto from the nineties and the move to dress normal. It’s not about outward expression. Sometimes you can put on a basic fit and look like everybody else, but still be cool. Their whole push was just to totally eradicate that, which is hilarious. Or any Seinfeld episodes. Heavy normcore. For some people it’s not that. But for other people it’s definitely like, “yeah.”

But for you personally?

It’s definitely expressing my inner and it’s just fun. My Chinese Zodiac is a dragon, so I’m always trying to have shiny scales. Be as much dragon as I can be. 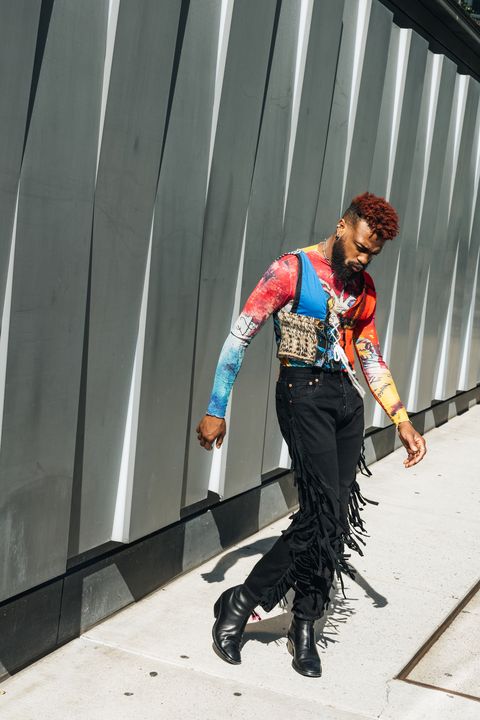 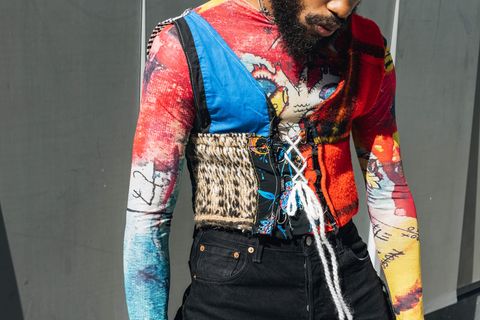 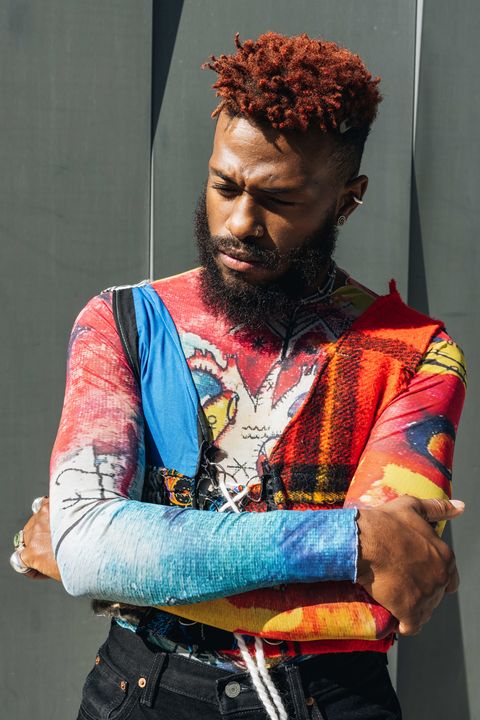 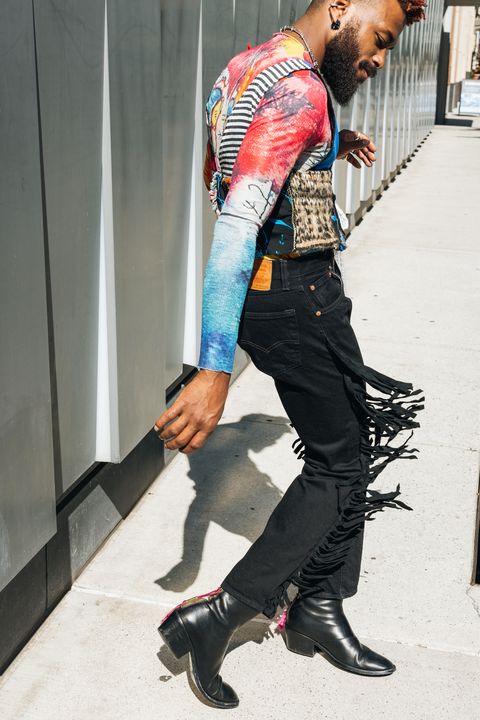 That’s deep. Do you separate who you are as an artist stylistically with who you are off-stage?

There’s a difference. I can’t be that person on stage that I am in regular life.

[Off-stage I] could be bolder. Sometimes I try to dress it down. I’m really just trying to create a uniform that I can wear every day on some Hey Arnold shit. I can just throw this fit on, look good, and not think. If I’m performing, yeah, I’m going to go all the way out, you know what I’m saying? In some type of way, I will look really cool or dynamic. But in my regular, everyday life, as I’m getting older, I just want the garment to be of good quality. I want it to look good on me, and that’s it. I don’t need to be in platforms when I’m ordering my flat white. I don’t think it’s important. But I can. Sometimes I do want to dress it up. If I dress it up, I’ll go all out.

What are some of your favorite brands or designers right now?

I really like what Dion Lee is doing. They created this men’s corset that looks athletic. It still has a slight femme quality, but it looks pretty masculine, and that is crazy that you can make a corset look masculine. That phrase within itself is insane. But it’s very like Dion Lee. They’re pushing design, and it’s not even about a logo. I’ve never even seen Dion Lee written on any of their garments. It’s literally only about the shapes that they create, and the colors. I like my homie Tommy. He has a brand called Tom Bogo. He’s taking this whole utilitarian approach to everything. It’s a lot of pockets. It’s a whole out of pockets. But he does it in a sense that it looks amazing, design-wise. Alexander McQueen: they were failing for a while. I’m sorry. No shade. But he died and, I don’t know, it took some time, but they plummeted. It got real basic. I don’t know what was happening, and I don’t know if they have a new creative director, but they’re doing some really nice stuff. Once again, it’s the shapes, especially with women’s garments. They have this one suit that cinches in and then it blooms out to create this circle. It’s so good. And then they have this men’s boot with this chrome tip and I can’t even really explain it. It’s just good.

Christopher Fenimore is a writer and photographer living in New York. Working with clients ranging from clothiers to vineyards, he’s also covered street style for a number of outlets. Follow him on Instagram at @c.fenimore.