While I’ve had many conversations with Mark over the years, I don’t think we’ve sat down and spoken about menswear specifically until now; there is, after all, much more to Cho than just clothing. That said, we got into it this time. Below, we discuss how Mark expanded The Armoury from Hong Kong to New York, how he spends his downtime relaxing, which watches in his collection are his favorites, the expansion of The Armoury’s casual wares and what that means for the shop’s direction going forward—and plenty more. 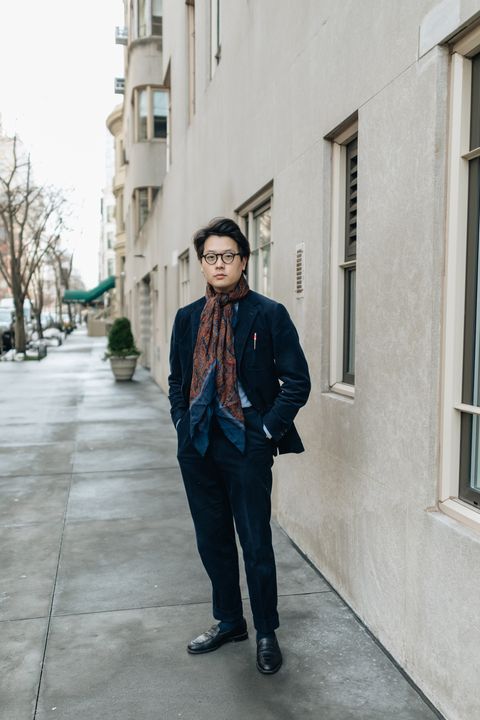 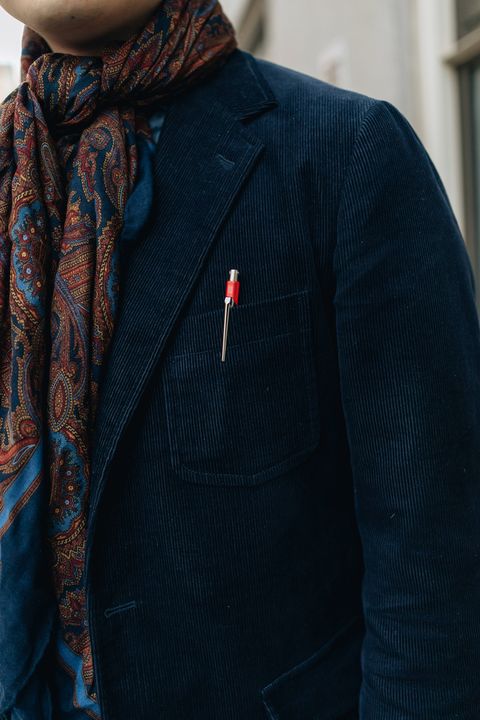 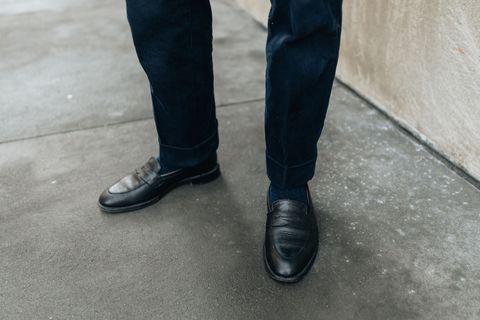 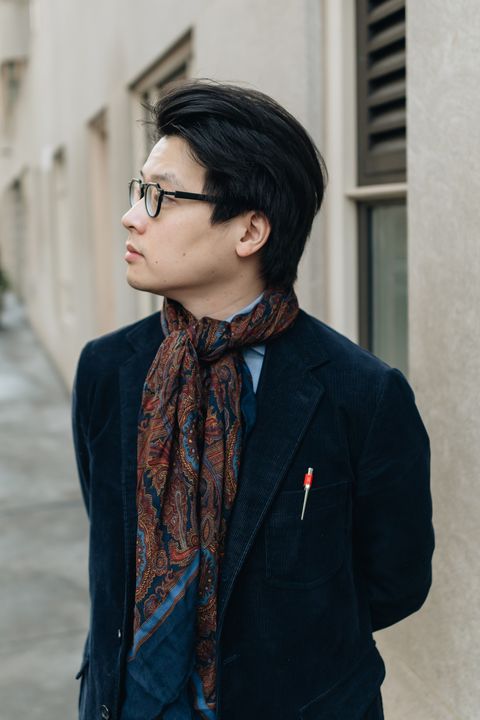 Esquire: You’ve done a fair amount of interviews with good information about The Armoury and its foundations, so I’ll skip over that and start with Mark Cho, the man. Where are you from, and what did you do for a living prior to opening The Armoury? Do you remember the first moment you realized you had a passion for dressing well?

Mark Cho: I was born and raised in London and I went to university in the U.S. Prior to The Armoury, I worked in women’s clothing, then banking, then real estate. Yes, it’s a weird transition.

Dressing well came later, I was initially just drawn to tailored clothing as a “thing.” I thought, and still think, the way it’s made, the culture behind it, and all the rules that govern it are all super fascinating. I came upon it when I was 16. At that age, my school allowed its students to switch from a school uniform to a suit or a jacket and trousers. I started digging into the subject and the more I learned, the more I liked it. 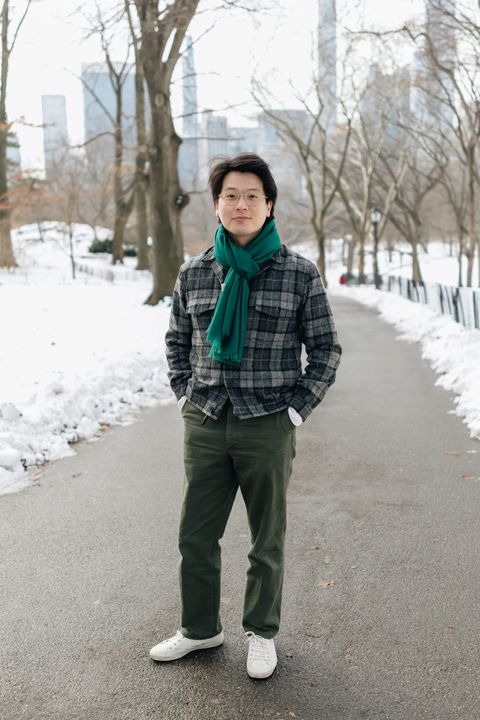 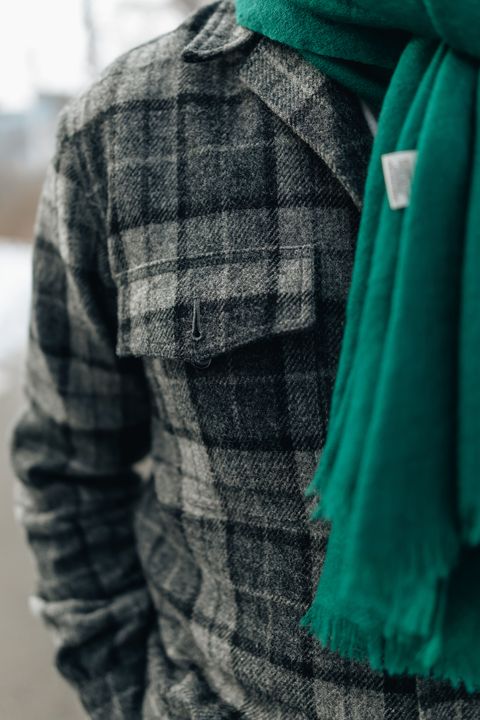 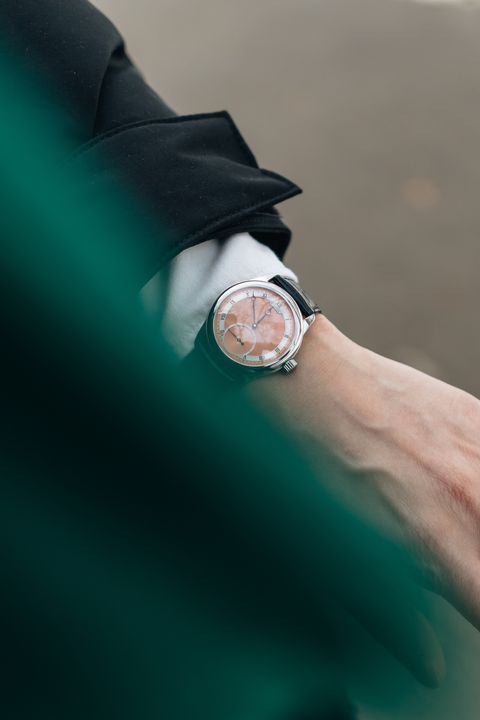 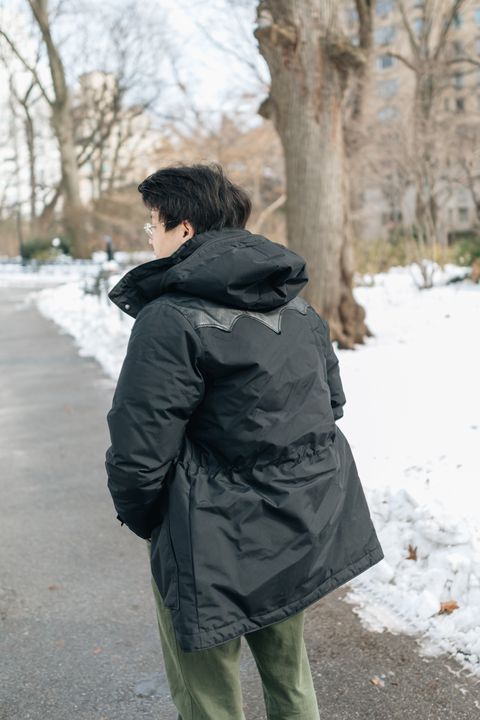 Esquire: How did you expand from your first shop in Hong Kong to New York City? What are some non-negotiable tenets of The Armoury, in terms of the clothes you buy, and in terms of the service your employees provide?

MC: Back in 2013, we were doing well in Hong Kong and shipping quite a lot of orders internationally, too. Originally, we wanted to have a London store. I still consider it my hometown. However, our various attempts at securing a location fell through; New York was next on the list. Unsurprisingly, New York has always been our number one territory for online business, so I figured it might be an easier place to get a store started. I stumbled on our Tribeca store completely by accident. That same year, I was at City Hall downtown for a friend’s wedding and he was three hours late because he forgot his rings and various other things. Having some time to kill, I walked around the neighborhood, stumbled on 168 Duane Street, and the rest is history.

It’s hard to think of any hard-and-fast rules for what we buy for the store. We try to buy solely from craftspeople or those who are very directly involved in the production of their product. We try to source from everywhere as long as we think it fits in with our classic aesthetic. I think that’s what’s so beautiful about classic menswear. It’s a look that has been around for so long that everyone has their own take on it and each country, region, and city has their own nuanced approach. That’s what makes sourcing internationally so interesting. We try to make sure customers walk out of The Armoury happy while still looking like their own person. We are not here to make photocopies of looks, we are here to help customers build a wardrobe that really suits them. This is why we have such a broad range of products. We want people to feel like they have a lot of interesting options with which they can express themselves. Our team is all about introducing people to the idea of building a wardrobe for themselves and then helping people through that process. 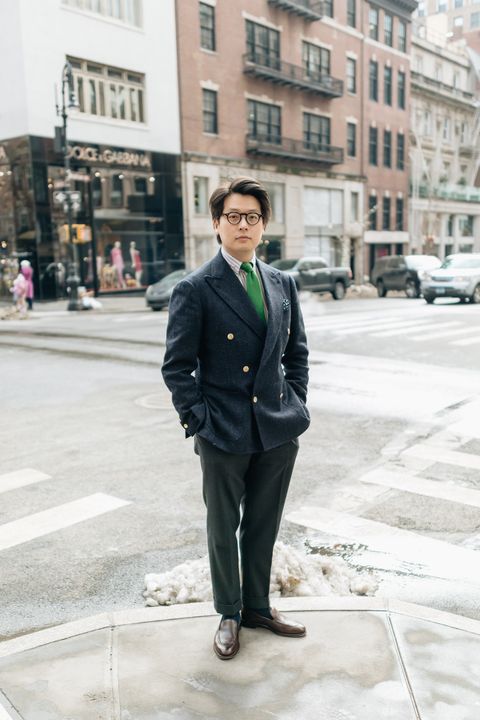 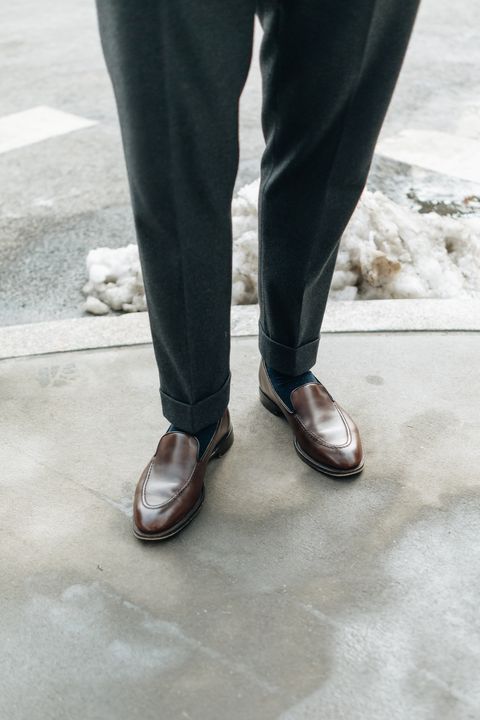 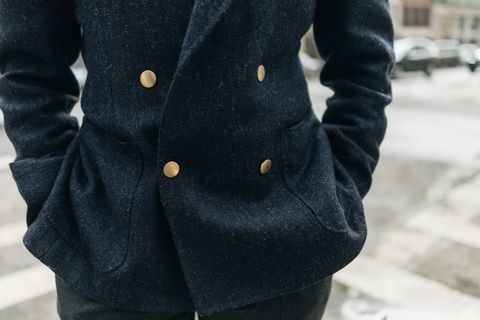 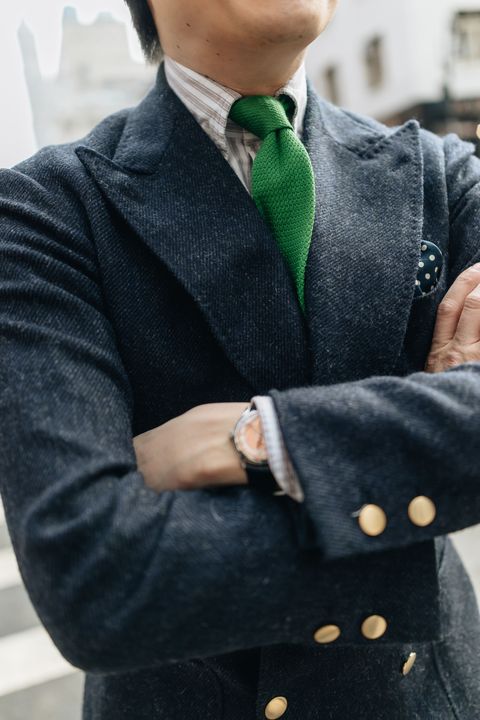 Esquire: When you aren’t consumed with traveling for work, what do you do in your downtime? Outside of The Armoury, what is important to you? Do you have any advice for someone stuck in a work-rut on how to shake it off and make life more interesting?

MC: In my downtime, I play a lot of video games. It’s really the only thing that takes my mind fully off of work. I really like games made by small indie studios, like Slay the Spire, Faster Than Light, Hades, Synthetik II. You can tell when something was made by one person or just a small team. These things have a level of thoughtfulness that you rarely get with large scale, industrially produced projects.

If you mean a work rut—like, you don’t like your job and want to do something else—I am hesitant to offer anything. I really like what I do now but it is not exactly what I thought it would be when I first started on this path. It just kind of morphed into what it is now and I like it. I feel very fortunate about that because the beautiful dream and the cold hard reality could have very easily not matched up and I could have been saying, “I thought this would be more fun than it really is,” instead.

Esquire: I have a hypothesis that people want to get dressed nicely again, and not just for events and special occasions. Maybe that’s me projecting, but is your team seeing a boost in tailoring sales? Do customers seem more apt to dress up?

MC: I think there is a lot of truth to your hypothesis. People get bored of things; it’s simply how people are. Being in soft, loose, shapeless home clothes for a week is fun. For a year, it’s a different story. I’m very excited to be seeing people wanting to explore clothing again. While the classic grey and navy suit for the workplace hasn’t come back (and may never), clothing for ceremonial and social events has rebounded significantly. 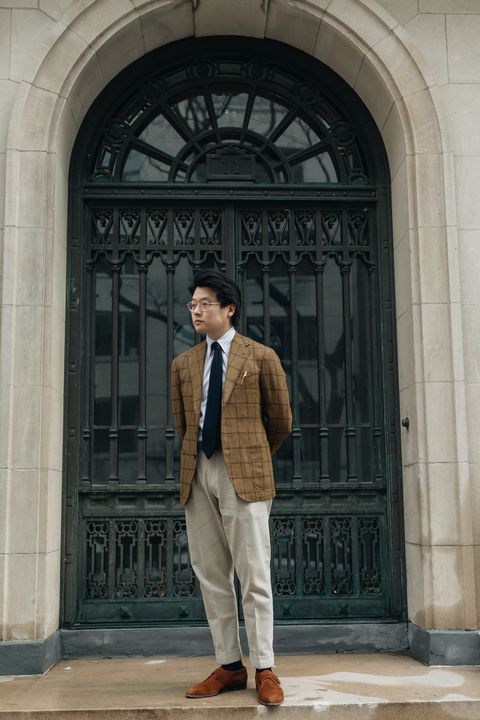 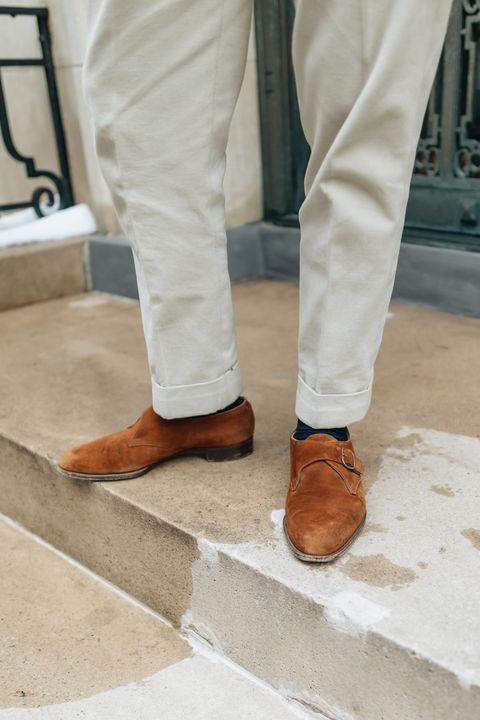 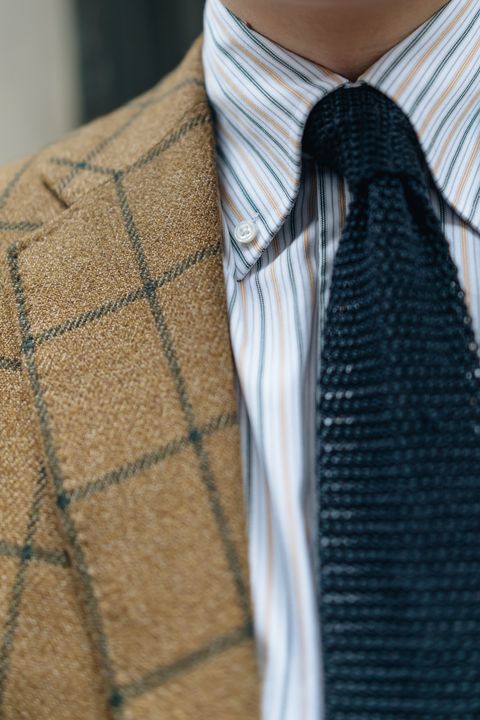 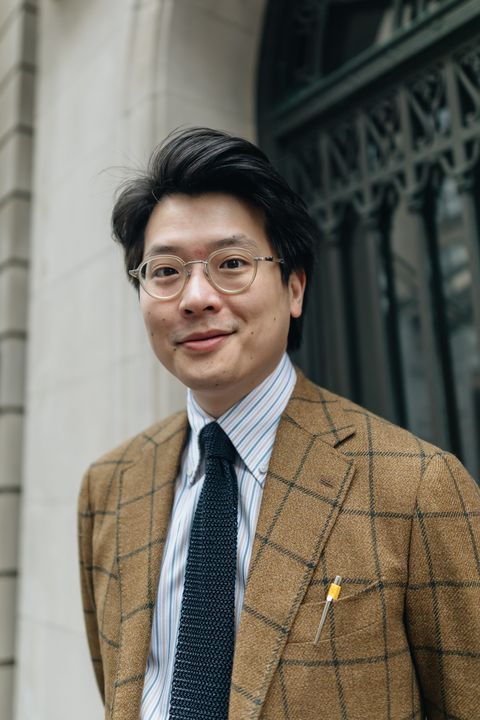 Esquire: On the other hand, I’ve seen more casual wares in The Armoury’s stock than usual. Why has there been a shift in the shop’s direction, such as the City Hunter jacket and pant?

MC: Casual options at The Armoury are not a new thing but we do have more variety than ever among this type of clothing. The City Hunter jacket went from being a successor of the Spanish teba (an old style of country jacket) to its own special line that encompasses Japanese jersey-knit versions and made-to-measure versions in linens and tweeds. We also created many new casual designs such as the Three-Pocket Blouson, the Safari Jacket, and the Road Jacket as well. The obvious reason for this is the shift in workplace attire. People don’t dress in suits at work like they used to, but they are open to something that is more professional looking than jeans and T-shirt. This is where sport coats and casual alternatives to sport coats have found renewed purpose.

Behind the thinking of these changes is also a fundamental position of The Armoury, which is that we must always stay relevant to our customers’ lives. If for some odd reason it became a societal expectation that people should attend meetings in Pikachu costumes, I would feel obligated to investigate how to make an acceptable option for our customers. We do our best to make things that our customers might need. Plenty of shops of our ilk disappeared in the past because they underestimated the need to stay relevant to their customers’ lives, and I certainly wouldn’t want that to be us. 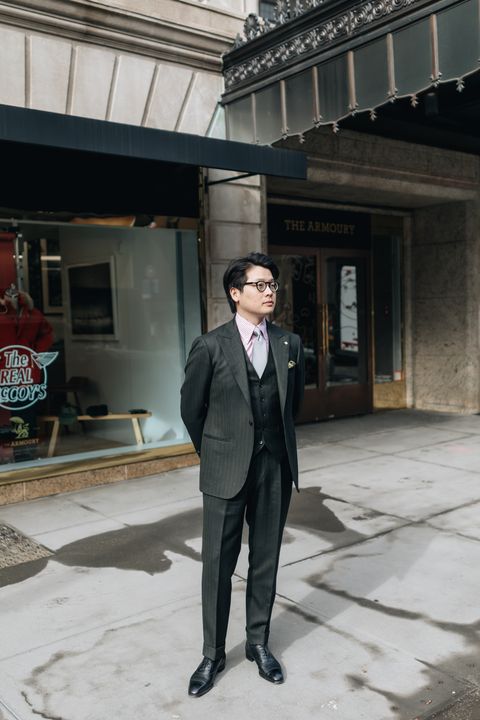 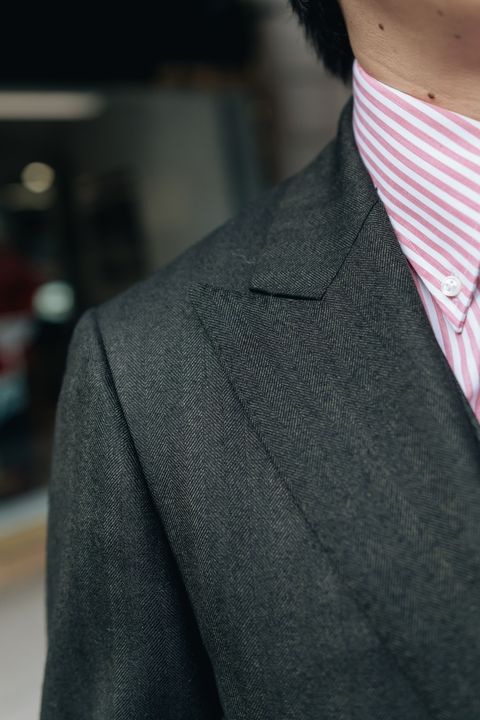 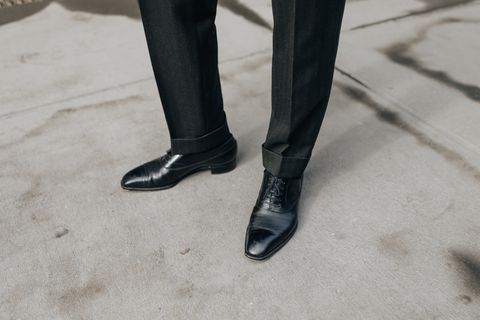 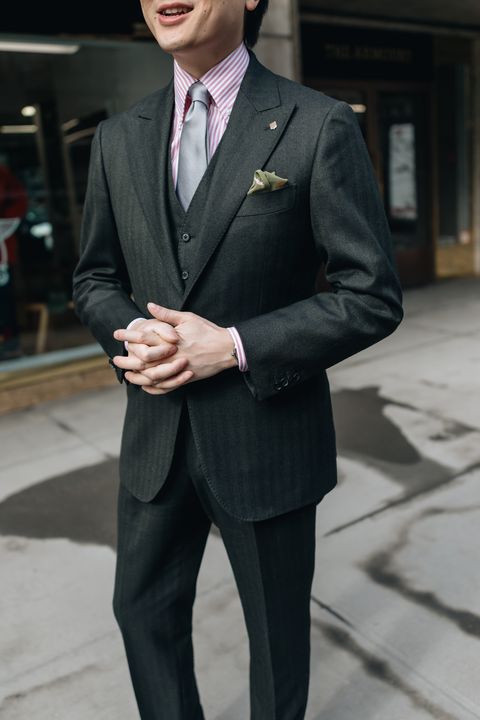 Esquire: It’s no secret you’re a huge watch collector and enthusiast. Can you tell me your three favorite pieces in your collection? Is there a watch you’re currently on the hunt for? Finally, can you tell me how you feel about the current steel sports watch craze and where your allegiances lie in regard to watch case size?

MC: Very briefly: my Christian Klings, which was a bespoke watch made for me by an old gentlemen near Leipzig; my A Lange & Sohne Little Lange 1, a compact and very handsome little watch with great guilloche; and my Naoya Hida Type 1B, a hand engraved Japanese indy that I’m a big fan of. I am on the hunt for nothing. I have way too many watches to the point where I question my sanity. The steel watch craze has nothing to do with me. People like their thing and I like my thing. My allegiance to watch case size will always be to smaller pieces. I think most of the watches on the market are too big.

Esquire: Over the course of the pandemic, you invested a lot of time and energy into The Armoury’s YouTube channel. Why do you think it’s been successful, and what was your reasoning in revamping a channel dedicated to dressing well when most folks were stuck in the confines of their home in loungewear?

MC: We made The Armoury TV because we wanted to talk to customers. I really like talking to customers, as does my team. At some points during the last two years, customer interactions really slowed to a trickle, and to be able to at least act it out on camera was quite therapeutic for me as well as being of interest to customers. While people might not immediately want to buy some tailored clothing, they certainly still like thinking about what they might wear next and how they might build out their wardrobe. I always speak on camera as if it were a conversation with someone, and I think people enjoy being able to imagine how that conversation about clothing might go.