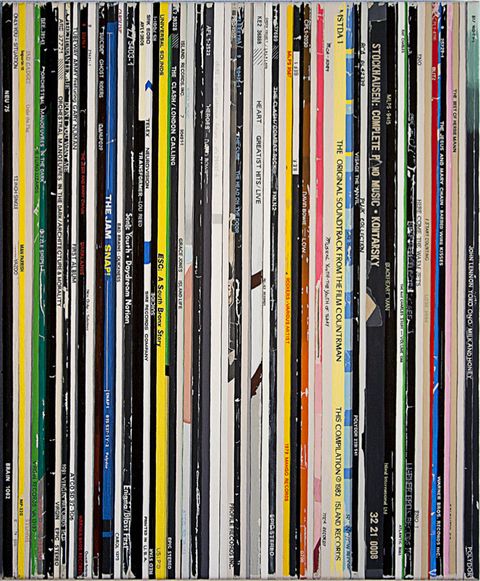 Over the holidays, I joined my family in helping our mother pack up her condo and move into a smaller place. Our parents kept a tidy house, but every home has one: the unfinished part of the basement, the cellar of misfit toys (and old rugs and cathode-ray televisions), the place where you put the boxes you packed hastily the last time you moved, or the time before that. These would need to be gone through carefully—a sample box would be three wax apples, a Learn Windows 95 VHS, and my father’s birth certificate—but we would need to be ruthless. Donate or pitch unless it was absolutely necessary to keep, for the neat and uncluttered life Mom deserves. Who cares if you’re euthanizing a memory? The point is to simplify, to streamline.

And then I uncovered a stack of records I hadn’t seen or thought about since high school, and I said, Okay, boys, you’re coming home with me.

I have a turntable in my office at home, and I’ve created a daily ritual: I pick out a record to play first thing in the morning, to set a tone as I journal and plan my day. The record du jour for most of December was one I’d forgotten until I excavated it: Shibumi, a 1988 album by an Irish rock band called Tuesday Blue. It’s the only album they made, and I must have snapped it up after hearing one of the tracks on college radio. It calls up no specific memories—it’s your standard post–Joshua Tree majestic Irish rock record—but now it’s finding significance. It’s helping me relive the time when I would buy a record and—because I had bought it with my own money—listen to it until I appreciated it. I would learn its contours over time. I would make myself fall in love.

If you grew up before streaming, you get it. “In the ’90s, if I’d given up my hard-earned $9.99 on something I didn’t immediately love, I was going to sit with it until something clicked with me,” Dan Ozzi, author of the 2021 book Sellout, told me recently. You made an investment with a record, and you were going to make it pay dividends.

Now we live in the Ephemeral Age. Most home entertainment is available for a flat fee and has no physical form. It comes and goes and leaves no trace. I know we all need to pare back our belongings—it’s how we all started saying “spark joy”—but maybe a little clutter serves a purpose.

A friend of mine directed a movie for Netflix a couple of years ago. A big one with big names that got big press. It was his life for two solid years, there was a big red-carpet premiere, and then on the night it dropped, he and his wife watched it on their TV, engaging with it the way the world would. The next day, when he returned to Netflix, the movie was gone. There was nothing to remind him it had ever happened. No thumbnail, no graphic. Nothing to recommend he watch it, because he already had. On you go, the home screen told him. Forward, march.

While assembling my annual Best of the Year mix in December, I found myself relying less on my memory and more on my play history. In years past, the CDs or cassettes or LPs would be on a shelf, their presence reminding me they exist, but this time I had to research my behavior. Instead of “Ah, I remember playing this over and over in the car until my friends begged me to stop,” it was “The data shows I was obsessed with this song for 36 hours in late April.”

What hookup apps have done for human interaction, streaming has done for art: It makes it easier to opt out of the hard work of falling in love.

It’s not just the risk that we’ll forget the things we love; it’s that the quick and frictionless way we interact with art robs us of the chance to engage with it in the first place. “I’ve done a really bad job in the digital age of keeping a New pile,” Ozzi said. “I used to have a stack of 15 new albums, and that would be my New pile. I would kind of absorb them, and then as the weeks went by and I listened to them enough, they went into the main collection. Now it’s just an amorphous cloud of singles and things. I don’t have a good grasp on it. I don’t have a way to categorize what’s new in my life.” What hookup apps have done for human interaction, streaming has done for art: It makes it easier to opt out of the hard work of falling in love.

It is ridiculous to have vinyl records in the home. They take up space, they only do the one thing, and if they’ve been sitting in a basement since 1988, they smell weird. But they also force some patience on you; skipping means walking across the room, picking up the needle, and placing it on the next song just right. So you don’t. You let it play. You let it call up a memory or create a new one. You make friends with it, the way you do with people. Frustrating, imperfect people.

The world seems to be catching on to this. Vinyl is still a niche market, but it’s risen in popularity enough that there’s a raw-materials shortage. And while that gets sorted out, the old stuff is still out there, in used-record stores and on eBay and in the unfinished part of your mother’s basement.

Grab some, and hold on to it. Your kids may not be glad you did, but you will.

And if you need a cathode-ray TV, get at me.

The work of this groundbreaking hip-hop act was still not available for streaming at press time. Fine; it sounds better on a turntable anyway. Their debut is so good, even the skits are worth listening to.

If you know, you know. Keene is the great American power-pop cult figure; his ’82 debut goes for $100 on eBay. This is why I cannot pass a used-record store without dashing in and thumbing through the K’s.

If you find a record called Fantastic or Hit Express, snap it up. K-Tel albums were like the Now series for the ’60s through the ’80s: perfectly eclectic snapshots of their cultural moments as they truly were, not as we immediately began to misremember them.

I mean, listen: Even a standard post–Joshua Tree majestic Irish rock record is worth owning.