Italian cult fashion brand Golden Goose hosted the second of its “From Venice to Venice” skate-inspired events last week in Los Angeles. Interestingly, it did not in fact take place in Venice, but in an out of the way Pink Motel in Sun Valley. The motel, which opened in 1946, is a well preserved hymn to west coast Americana and has featured in numerous videos (think CeeLo Green’s 2012 hit “Fuck You”) and TV series including Glow and Dexter. But that’s not why Golden Goose tapped if for its party. The Pink Motel, you see, is also famous in skate circles for its deep, curvy, kidney-shaped swimming pool, featured back in 1987 in the seminal Stacey Peralta skate movie The Search for Animal Chin which featured, amongst others, a 19-year-old Tony Hawk. 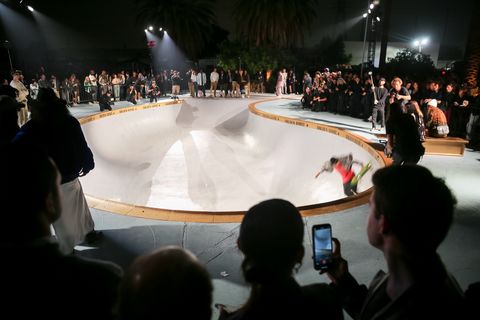 The infamous pool of the Pink Motel.

For Golden Goose—which the same night launched a limited, 100-pair edition of its Ball Star sneaker with suitably pink accents—skate is the gift that keeps on giving. During dinner, celebs and social animals like Brooklyn Peltz Beckam and rapper YK Osiris stepped away from their seats and lined up to utilize the brand’s hand-customizing team who further futzed-to-order with the pre-distressed sneakers using graffiti, tape, and studs. These distressed and customized sneakers were the founding idea of Golden Goose back in 2000; now that the brand has grown exponentially, especially in the past five years, it has the unusual distinction of being coveted equally by everyone from skaters to fashionistas and Milanese moms.

With dinner done, Olympic bronze medalist and friend of the house Cory Juneau took to the famous drained pool in a custom-made Golden Goose pink suit along with a gang of skate-mates, pulling one gravity-defying trick after another on the pool’s vertical sides. It echoed the first audacious “From Venice to Venice” event staged in September 2021, when Golden Goose constructed a wooden skate bowl from scratch, hoisted it onto a barge, and moored it for a skate party in the middle of the Grand Canal of Venice, the brand’s HQ and spiritual home.