In what appears to have been an automated response, HBO Max’s customer-help account on Twitter proactively reached out Sunday night to ask the main @hbomax handle if it needed technical help to watch the premiere of “House of the Dragon.”

The @hbomax account, about an hour after the 9 p.m. ET premiere of the “Game of Thrones” prequel series, had tweeted, “The only thing that could tear down the House of the Dragon was itself. #HOTD”

Less than half an hour later, @HBOMaxHelp replied with a polite, obviously canned query: “Hi, we want to help. Could you please let us know what device you’re using?” (The tweet has since been deleted, but you can see it below.)

The meta exchange occurred as a relatively small number of HBO Max users reported problems accessing the streamer Sunday night. According to service-monitoring site Downdetector, a peak of 3,784 people reported having problems with HBO Max on Sunday evening.

HBO Max, in a statement Sunday, said a “small portion” of customers who were using Amazon’s Fire TV devices had trouble accessing the service and that it was working to resolve the issues. “’House of the Dragon’ is being successfully viewed by millions of HBO Max subscribers this evening,” the HBO Max statement said.

What may have prompted @HBOMaxHelp to ask, in effect, itself if it needed assistance? The system powering @HBOMaxHelp evidently was automatically scanning for tweets referencing “House of the Dragon” in some way, along with keywords indicating technical distress — in the case of this particular tweet from @hbomax, “down.” 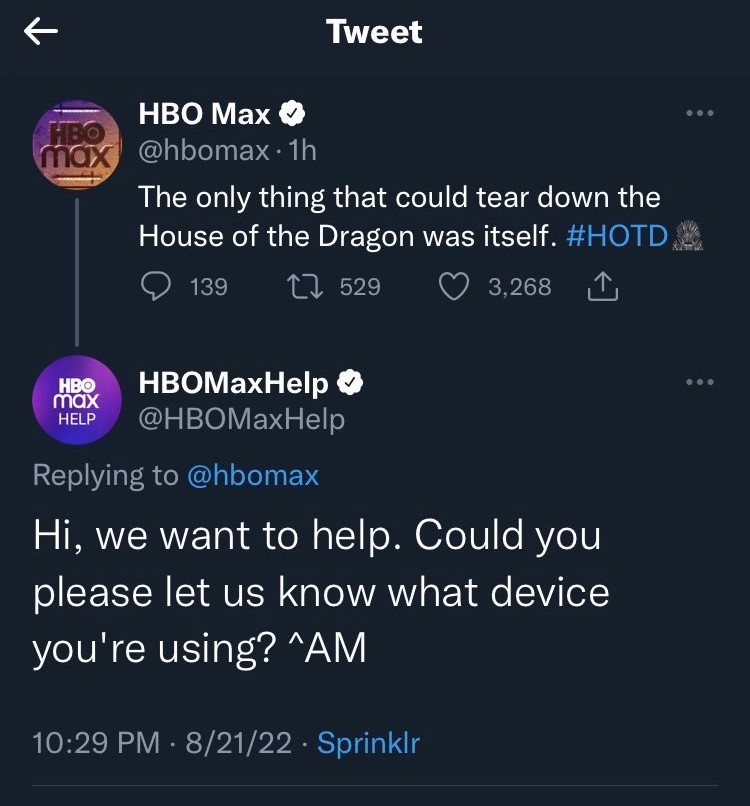 The metadata in @HBOMaxHelp’s tweets indicates the service uses software from Sprinklr, a provider of “unified customer experience management” tools, to monitor and respond to user requests.

Two weeks ago, Warner Bros. Discovery announced that it had completed a months-long process to update HBO Max apps across all platforms to “a more performant tech stack” along with enhanced design and navigation features. Starting in the summer of 2023 in the U.S., WBD plans to launch a merged HBO Max/Discovery+ streaming platform that combines features and content from both services.

Pictured above: Matt Smith as Daemon Targaryen in HBO’s “House of the Dragon”