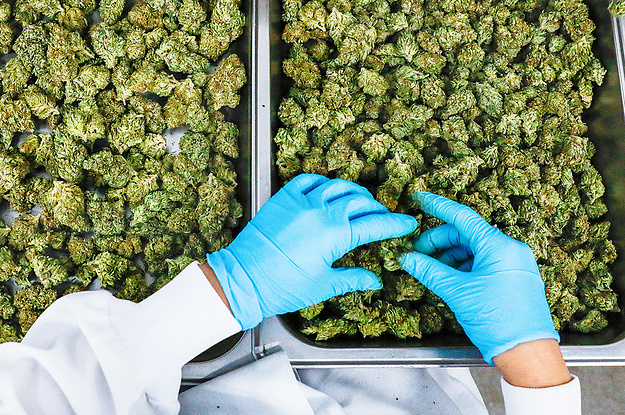 The death of an employee early this year at a licensed cannabis facility in Massachusetts is calling attention to the very real threat that the job poses to the health of some workers in the relatively new industry.

Lorna McMurrey, 27, died three days after being admitted to the hospital on Jan. 7 of “occupational asthma due to exposure to ground cannabis” in a cultivation facility in Holyoke for the brand Trulieve, according to an Occupational Safety and Health Administration report.

The OSHA inspection also revealed that employees in the “flower production” area “were not provided effective information and training on the hazards involved in the cannabis production and grinding process.”

Occupational asthma occurs when people inhale fumes, gases, dust, or other harmful substances in their workplace that cause inflammation in their respiratory tract. Symptoms may include coughing, wheezing, shortness of breath, and chest tightness, all of which could result in death in severe cases. Common occupational irritants include ammonia, sulfur dioxide, latex, mold, hydrochloric acid, animal proteins, and flour (which can lead to what’s known as baker’s asthma).

In many cases, people who have occupational asthma also have allergies that may trigger their respiratory symptoms. This is called allergic asthma, and it affects about 60% of people with the condition.

Occupational asthma has become the most common work-related lung disease in developed nations, according to the American Academy of Allergy, Asthma & Immunology, and is estimated to represent up to 15% of all asthma cases in the US. People who work in the healthcare, construction, agriculture, forestry, and manufacturing industries know the risks all too well; research shows the highest proportion of cases occur in these fields.

However, researchers told BuzzFeed News the relationship between respiratory diseases and cannabis exposure in the workplace is complicated — many other factors, such as the presence of other irritants like mold and pesticides and personal cannabis use, could play a role in workers’ health issues.

McMurrey’s death suggests occupational asthma could be a problem in the burgeoning cannabis industry, which adds thousands of employees each year. As legalization expands, experts anticipate the condition may become more common among workers in indoor grow facilities and they say current estimates of its prevalence are likely underreported.

In a statement to BuzzFeed News, Trulieve contested several claims from “initial reports,” including that it had only offered employees paper masks, that McMurrey was working in the “flower grinding room,” and that a supervisor told her to continue working after she said she didn’t feel well.

The company said N95 masks were available, that McMurrey was actually working in the “pre-roll area,” and that she had opted to go back to work.

“Trulieve will continue to operate its facilities in a manner that fully protects the health and safety of all employees,” the company said. “We are confident we did so in January and will continue to do so going forward.”

“As with any industry, there are potential occupational hazards and protecting employee health and safety must be the absolute highest priority,” National Cannabis Industry Association cofounder and CEO Aaron Smith wrote. “We hope that was the case in this terrible matter.”

BuzzFeed News could not reach the McMurrey family, but Dave Bruneau, McMurrey’s stepfather, told the Boston Globe that she had asked for a respirator to wear to work several weeks before she died.

“She said the air was full of dust. You could see it and it would stick to your skin and stuff,” Bruneau told the Globe. “My heart fell into my shoes when the nurse at the hospital told me she was brain-dead from a lack of oxygen. I want people to know what happened to her, and I don’t want it to happen to anyone else.”

What to know about occupational asthma

Occupational asthma falls into two categories: work-aggravated asthma, which is the exacerbation of someone’s preexisting asthma symptoms while at work, and new-onset asthma, which occurs when a person without a history of asthma develops symptoms when they work.

New-onset asthma can be broken down into two subcategories, according to Carolyn Reeb-Whitaker, principal investigator for the Occupational Respiratory Disease Surveillance Program in Washington state.

The first is occupational asthma without latency — also known as reactive airways dysfunction syndrome — meaning symptoms begin suddenly after someone is exposed to high concentrations of a chemical, dust, or another substance. The second is occupational asthma with latency, meaning it takes days, weeks, or months before a person becomes asthmatic.

Reeb-Whitaker and colleagues published a study in 2021 that analyzed 784 work-related asthma cases in Washington between 2009 and 2016. The majority of cases involved people with work-aggravated asthma in the healthcare industry. The highest proportion of new-onset asthma cases occurred in the agriculture, forestry, fishing and hunting, manufacturing, and construction fields. Mold; cleaning materials; and dust from hop plants, wood, and cedar were mostly responsible for triggering these cases.

Regardless of the type of occupational asthma a person has, symptoms are usually always worse during work and improve when they’re off the clock. The level of hazard can depend on the intensity and length of exposure and the conditions inside a workplace, like where the ventilation systems are, Reeb-Whitaker told BuzzFeed News.

However, symptoms can persist even when exposure stops, the AAAAI says. It’s also possible to develop occupational asthma even if you’re using protective equipment like respirators, gloves, eye goggles, and exhaust ventilation systems.

People who smoke and have a family history of allergies are more likely to develop occupational asthma, especially to certain irritants like flour, animals, and latex, according to the AAAAI.

Workers who experience allergic asthma typically develop it months or years after prolonged exposure to a substance because it takes time for their immune system to become sensitized to it. This process involves the production of allergic antibodies called IgE that can generate inflammation in the airways, sometimes causing an asthma attack.

However, “it’s a gray fine line between allergy crossing into asthma,” Whitaker said, because both conditions share similar symptoms.