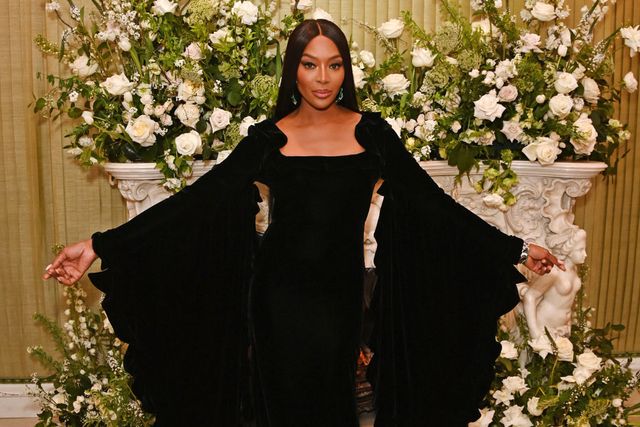 I’ve loved Naomi Campbell since the ’90s. Her sculpted face and silky straight hair are imprinted in my mind when I think about my introduction to fashion. As a child her influence on me knew no bounds, whether it was her ‘Got Milk?’ ad that made me solely drink 1% or her strong runway walk that I would try to emulate years later at the beginning of my modeling career. She’s one of the original supermodels—a true icon—so much so that today, she’s simply known by her first name: Naomi. Her impact on the fashion industry is limitless. Amongst all the supers, Campbell is the most booked and busy, strutting down runways, posing on multiple covers, and most recently, becoming the new face of Pat McGrath Labs as the brand makes a foray into skincare.

The latter is what led to our Friday afternoon Zoom conversation. She appeared on screen with her PR entourage mute and off-camera, but noticeably there as they surround our two images. Nevertheless, it felt like we are the only two in the room. “Hi Danielle, how are you doing?” she asked with her (literal) million-dollar smile. I sat back with ease and returned the smile. We immediately began talking like old friends, about skincare, the pandemic, and amidst all the craziness in this world, where she feels most comfortable.

Naomi’s skin is goals, whether you are 51 or 21. She’s been using Pat McGrath Labs Essence 001 in Rose for a year now and it just accentuates her natural glow. And while I was expecting her to run down a list of expensive products that only supermodels or the super-rich could access, her routine had less to do with what she puts on her skin and more what she puts in her body. “I don’t do coffee and I’ve never really been into coffee,” she said. As a one cup a day and a cappuccino at brunch on the weekends type of woman…my heart sank. If you want her skin but can’t face rough mornings without your daily caffeine, she emphasized the importance of staying hydrated. In addition to drinking water, Naomi revealed, “Every few months I do a cleanse where I drink a certain juice for that period of time.” And even supermodels aren’t absolved of the effects of aging and our metabolism. “I can’t eat like I used to,” she admitted. “I’m more pescatarian than anything now. I try to be careful of what I put in my body.”

And that’s understandable. No matter the age, many of us have become more health-conscious and cleanliness-focused for added protection against COVID-19. In 2019, before the pandemic, Campbell went viral for an epic pre-flight cleaning routine that involved her vigorously scrubbing with Dettol wipes and wearing a mask during the majority of her flights because people cough and sneeze on the plane. And while many laughed then or considered it extra, little did we know that months later, it would become the norm. Now she’s expanded her routine. “I added,” she said—and not just solely for the plane. She’s created her own concoction for elevators “because you go in these elevators and often a lot of them don’t have an air filter!” Campbell rattled off the recipe with the precision of someone who has clearly made this multiple times: “chlorophyll, vinegar, and iodized salt, and I boil it and put in a spray bottle,” revealed Campbell. Even if people reassure her that the elevator or space has been cleaned, she sprays. “I’ve got to do what makes me feel comfortable in this time we’re in and so nothing has changed. I’m not taking off my mask. I don’t feel comfortable to take it off yet. I still feel like we need to be cautious and careful and diligent,” Campbell said.

So during a time when there is so much disarray, where does Campbell feel most at home? “For me, the continent of Africa feeds my soul,” she revealed. “The whole continent. The light, the people, the energy. I love it. It feeds my soul. It’s buzzing with creativity; there is a different essence in each place. They all offer healing and calming.” It’s no surprise, as Campbell has created an oasis via a villa in Malindi, Kenya. She admits how much she loves traveling; however, don’t expect to see her frequenting traditional tourist locations. “India, Saudia Arabia, Egypt…all these emerging markets and places that have been open to us that were never opened before are the places that I love,” Campbell said.

When our time came to an end, Campbell graciously thanked me for the interview and told me to be well. I immediately hung up and navigated to Amazon to add chlorophyll, vinegar, and iodized salt to my cart. While the world is currently unpredictable, one thing I do know is I’ll be surviving the pandemic just like Naomi Campbell—with hydrated skin and a homemade remedy (sans a luxurious villa in Kenya…for now).