After her arrest, the press loved to harp on the fact that a Domino’s pizza order to a hotel room in Tennessee was the thing that finally took the famed vegan chef Sarma Melngailis down. Of course, the pizza wasn’t for Melngailis, who remained a strict vegan even after she lost her New York City restaurant, drained her bank accounts, and went on the run for over a year with her husband Anthony Strangis. The pizza was for him—in fact, the whole saga was orchestrated by Strangis according to Netflix’s latest true crime offering Bad Vegan: Fame. Fraud. Fugitives.; the new documentary portrays him as someone who manipulated and controlled Melngailis for years in order to support his gambling addiction. Featuring interviews with Melngailis herself, her family, friends, plus investors and staff of her restaurant, the four-episode series sheds a new light on what was once regarded as a scandalous story of a very bad vegan.

Before she met Anthony Strangis, Sarma Melngailis was a successful restaurateur and author. Her Gramercy restaurant Pure Food and Wine was a favorite among celebrities such as Alec Baldwin, Anne Hathaway, Rooney Mara, and others, and back in 2004 when it opened, she was a pioneer in the raw food movement. In 2011, Melngailis met Anthony Strangis (who called himself Shane Fox) over Twitter, as he was tweeting to her friend Alec Baldwin, who he appeared to know. She met Strangis in person in November 2011 and began a relationship. 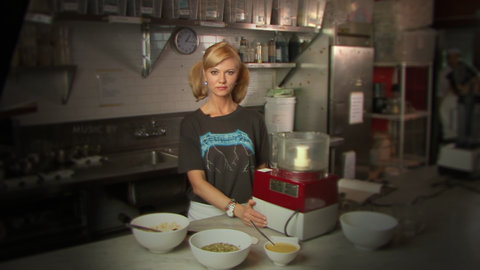 Sarma in the kitchen at her Gramercy restaurant.

Netflix’s docuseries recounts in detail the bizarre series of events that followed. Over time, Strangis allegedly isolated Melngailis from her friends, coworkers, and family, and convinced her that he had access to a great fortune and could pay off her debts if she only trusted him. He also allegedly told Melngailis he was some sort of secret agent, and so she had to give all of her passwords over to his “security” (which was really just himself) in order for them to secure her accounts. She even eventually believed that Strangis could make her beloved dog Leon immortal if she passed her tests and joined his secret society. Her “tests” usually consisted of her requiring her to wire him whatever amount of money he requested—at the expense of paying her bills, her investors, and even her restaurant staff. According to the Netflix series, he used classic coercive control tactics such as isolation, monitoring activity, restricting autonomy, sexual humiliation, and gaslighting in order to achieve control over Melngailis and her money. The couple were secretly married in December of 2012.

According to her 2017 indictment, in total Melngailis transferred over $1.6 million from her business accounts to her personal bank account and then to Strangis over a period of a few years. Strangis, in this time, spent $1.2 million of this money at Connecticut casinos and hotels. (He told Sarma he was off on top secret, dangerous missions during these absences.) This continued until 2014, when Sarma was unable to pay her staff for several months, which resulted in them going on strike. In February 2015, Melngailis went to her investors and asked for more support in order to help her reopen the restaurant, falsely explaining that she had needed the money the previous year to help her mother. After she raised $844,000, Pure Food and Wine reopened in April 2015. According to the DA’s office, in June of 2015, Melngailis took $400,000 total from the restaurant’s business accounts, transferring over $300,000 of that money to the Foxwoods Casino on behalf of Strangis. The pair then disappeared from New York. Pure Food and Wine shuttered for good in July of 2015, after 84 workers were owed up to $3,500 each, for a total of over $40,000. (At this time, Melngailis also owed New York State over $400,000 in sales tax.) 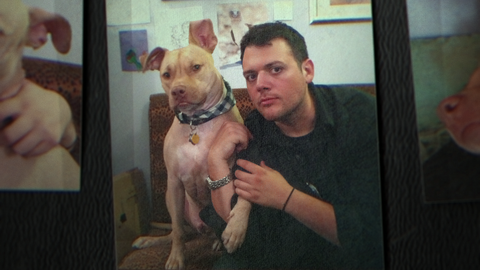 In Netflix’s series, Melngailis recounts Strangis driving her across the country at this time, from Miami to Las Vegas and eventually to Tennessee, where the pair would be arrested in May of 2016. The documentary shows Melngailis depressed, ignoring the hundreds of messages on her phone, and living in hotel rooms. During this time, Strangis was asking Melngailis’s mother for wires of money to help care for her daughter. According to Vanity Fair, he received more than $450,000 from Melngailis’s mother over time.

Eventually, that Domino’s pizza brought the couple down. They had been living in a hotel near Dollywood in Sevierville, Tennessee for forty days when Strangis used his real name to order a pizza, alerting the police to the location of the fugitives. The pair was arrested and extradited to Rikers Island in New York. Sarma made bail, but Anthony did not. He spent the next year in jail.

Strangis and Melngailis were charged with second-degree grand larceny, second-degree criminal tax fraud, first-degree scheme to defraud, violation of labor, and more, in a 24-count indictment in which they could have faced up to 15 years in prison if they’d been convicted. But both Strangis and Melngailis took plea deals. Strangis pleaded guilty to four counts of grand larceny in the fourth degree and was sentenced to one year in jail and five years probation, as well as having to pay $840,000 in restitution to investors. However, he had already served the majority of his sentence after his plea deal, as he never made bail after his initial arrest. He was never charged with defrauding Sarma’s mother, and there were no measures put in place to protect anyone who could become a victim in the future, after his release. Sarma pleaded guilty to charges of grand larceny, criminal tax fraud, and a scheme to defraud in exchange for five years probation and four months in jail, which she served in the summer of 2017. 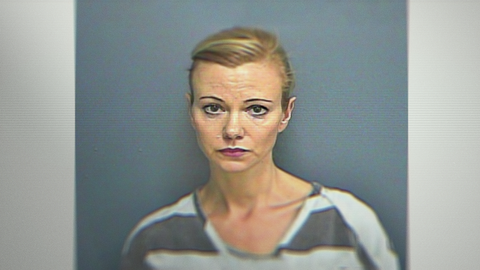 Melngailis and Strangis were arrested in May of 2016.

In May 2018, Sarma filed for divorce from Anthony Strangis. As of January 2019, Sarma was living in Harlem with her dog Leon, with hopes to get out of the city for a while. “It’s easier to live quietly outside of the city,” she told the New York Post at the time. “If there was some magical opportunity to open the same restaurant in the same place, I would do it in a heartbeat,” she said. “I think New York would take me back.”

According to Bad Vegan, Sarma came out of this ordeal with roughly $6 million dollars of collateral damage and debt. Her Instagram is public, and her bio reads “In mourning over Pure Food & Wine and One Lucky Duck. Rikers alum. It’s a long story.” In Netflix’s series, she finally tells it in her own words. “Why didn’t I run, why didn’t I leave, why didn’t I call the police? That’s the big question…I believed, in a sense, that these things were reality.”

On Wednesday, March 16, the day of Bad Vegan’s release, Melngailis shared some thoughts about the Netflix series on her website. There, she explains that while most documentary subjects do not get paid for appearances, she did, and used the entirety of that money to pay off the total amount that her former Pure Food & Wine employees were owed. “Of all the harm and the many debts resulting from my downfall, this portion weighed heaviest,” she writes in the post. She also takes the opportunity to clarify a few details about her relationship with Strangis: “I didn’t want to marry him, and that part of the story was inaccurately condensed. Also, the ending of Bad Vegan is disturbingly misleading; I am not in touch with Anthony Strangis and I made those recordings at a much earlier time, deliberately, for a specific reason.”

As for where Anthony Strangis is today, his probation is set to end in May of this year, five years after his release from prison. There’s no trace of him online, but as we know, Shane Fox doesn’t fear adopting a fake identity.