Nobody just comes out as queer. You come out as candid, as fearless, as vulnerable, and as whole. Coming out is a baptism that mutes the debate over whether or not you were born gay because you are reborn as out. It is a point of no return to find fresh dignity not just as possible, but also full of possibilities. Queerness need not be central to our lives, but it has a habit of becoming foundational. It’s a sublime subversion of the Biblical scold that “pride comes before the fall”—yes, God, let the power of pride compel irrelevancies and trivialities to fall by the wayside. When I came out, I passed through a keyhole that unlocked every layer of self that has followed.

That was a long time ago. Today, June 21, 2022—the longest, most sun-filled day of the year, of course—I have been out for 7,832 days. What makes that special this year is it crosses a threshold: I came out on January 10, 2001—7,832 days into my life—and so now every day adds to the majority of my life as an out gay man. Every coming sunrise is the dawn of the longest I’ve ever been out.

Life is full of so many similar moments: the moment you’ve lived in The Big City longer than you lived in your hometown; the moment your marriage lasts longer than your dating life; the moment you’ve worked longer at your job than at any previous job. None of those thresholds have names and yet all of them carry significant psychological and emotional weight. I call it the SGI, a less-nerdy (perhaps more-nerdy!) way of describing the Samwise Gamgee Inflection born out of his Lord of the Rings line: “If I take one more step, it’ll be the farthest from home I’ve ever been.” Every day is leg day when you spend it stepping farther from the closet than you ever have before.

But brokenness is afoot with gay pride. For all the huffing and puffing about diversity and range and spectrum, the life cycle of a queer person is fairly limited: you’re closeted, then you come out, then you’re proud. Period. Just proud forever. A hamster wheel of pride. Dumb pride that embraces dumb lies. Sure, the first Pride was a riot. Fine. But what was last year’s Pride? This year’s? If parenthood and artistry and career and taste can evolve over the years, then why not queerness? 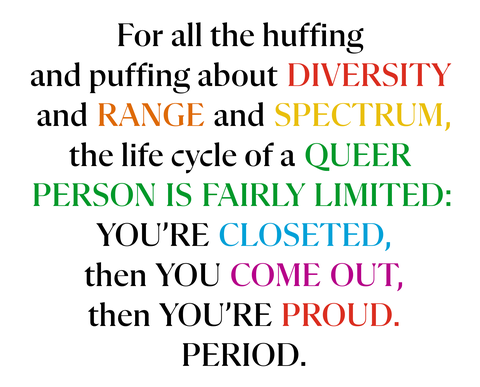 Under today’s good-vibes-only toxic positivity of emotional perfectionism where everything is amazing, a blessing, delightful, exciting, and an opportunity, the magic of gay pride curdles and—abracadamnbruh!—suddenly this self-awareness that gave such dimension to queer life bends and bows towards a flattening force. There’s a lazy way pride folds in on itself—a Möbius strip masquerading as an infinity symbol, a knotted rainbow of shackled splendor. It becomes, if not straightened, certainly ironed of its kinks. It’s the cowardice of an athlete or celebrity or politician publicly embracing their queer identity as an urgent social mission but demurring that the urgency does not extend to answering any normalizing questions about their dating life or sex life because they are too personal or private—the paradox of a pride that parades its privacy.

Just as we have let coming out become centered on other people’s comforts more than our own, we have tidied up pride to oblige the guests we’ve been so keen to invite to our celebrations. The queer flattening of pride is a response—a deference, really—to the flatness of straight self-ascribed allies and corporate sponsorship. We’re at a point where Burger King thinks Pride Whoppers are a good idea. Even the Trump tower in Chicago dons rainbow lights for Pride; it means nothing—a yuge nothing. Pride is now awash in the do-nothing, say-nothing vacuity of universal aphorisms like “be true to yourself” or “follow your heart” or “let your light shine” or “love wins.” It’s worse than respectability politics because it begs for respect without demanding anything political. Maybe it’s an unintended consequence of acceptance and inclusion, but that doesn’t dull the sting of disappointment and incompetence.

Who cares if Bank of America takes a pro-love position? Who is impressed by that? Whose heart or mind is changed? And what does that pro-love position even mean? Does the company believe the Employment Non-Discrimination Act should be national law? Does it fight for free PrEP in every state? The decriminalization of HIV? The freedom to donate blood? Adoption equality that matches marriage equality? It’s much easier to be proud of comfortably middle-class dads who want to feed their children Campbell’s soup or Cheerios than it is to extend that pride to a teen runaway celebrating a month of sobriety from meth. Much to Billy Porter’s chagrin, pride’s vital bravery lives beyond the comforts of red carpets—in line at the bank or the grocery store or some municipal lobby, summoning enough courage to report a rape to a cop or to ask a DMV agent to change the sex listed on your driver’s license.

The essential messiness of pride reminds me of a James Baldwin quote (but doesn’t everything?). “The American ideal, then, of sexuality appears to be rooted in the American ideal of masculinity,” he said in Here Be Dragons, or Freaks and the American Ideal of Manhood, his 1985 essay for Playboy. “This ideal has created cowboys and Indians, good guys and bad guys, punks and studs, tough guys and softies, butch and faggot, black and white,” said Baldwin. “It is an ideal so paralytically infantile that it is virtually forbidden—as an unpatriotic act—that the American boy evolve into the complexity of manhood.” 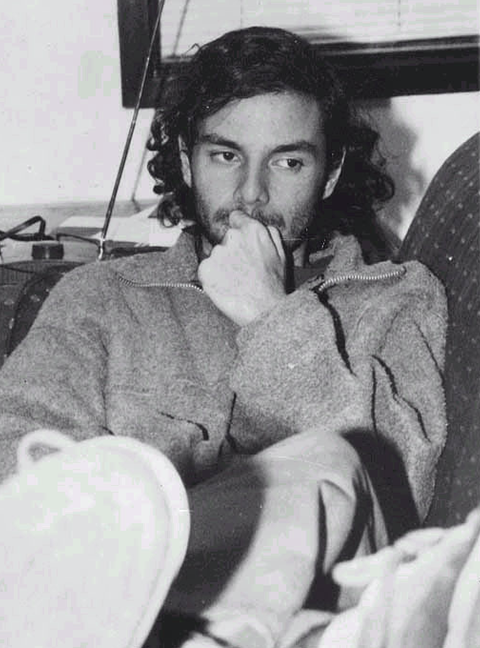 The author, around the time of his coming out.

I can be more than proud—fuller than proud. The multitudes within every queer soul ache for reach beyond grasp, for boundary-breaking not as a transgression of normalcy but as an exploration—an expedition!—into broader, bolder, deeper wholeness.

It’s letting a waiter laugh when you respond to his “together or separate?” question about the bill with a dramatic, “OH! Well, we haven’t really had that conversation yet but, yeah, I think we’re very together.” It’s going for long walks with my friends’ non-binary kid so they can ask me things they don’t want to ask their parents or Google. It’s wiping away a closeted college student’s tears after he comes out as “S.W.A.G.” (Secretly We Are Gay) by telling him that secrecy doesn’t make something shameful, only personal. And it’s leaning my head in between the driver and passenger seats of an Uber Pool after the passenger has just used “cocksuckers” pejoratively to plainly say “Don’t say ‘cocksucker’ as if sucking cock is a bad thing” to a howling cheer from the driver. It is the difference between being “here and queer” and being fully present in that queerness, the difference between marching and meeting.

“Pity the twas,” my friend Daniel Nardicio, a queer paragon of pan-generational empathy and change, said to me recently. He was referring to a twink so stuck in the performance of that identity that he has worn it out well past its psychological, social, or even aesthetic shelf life. “How did such a creative and radical group of people become so lazy and boring about expressing who they are?”

Michael Henry, a comedian whose videos provoke questions in an unvarnished way—“gay people like to lie,” says one—pointed out to me over a recent phone conversation that plenty of cities have moved on from Pride. “I go to New York often for Pride and thereh they have main Pride but also the Queer Liberation March. Here in L.A. we have two or three Prides. A lot of cities have a mainstream Pride they can broadcast on TV but, at the same time, a grittier version where kink and even anger have a place—not necessarily cookie-cutter pretty things. It’s Pride run by gay people,” he said. “I’m here for all the categories and differences because the more individual you feel it actually brings people together more. We’re so much more complex and diverse and layered than any one Pride.”

Plainly put, Pride’s mainstream acceptance hinges on how palatable we’ve made it to straight people and companies. And as queer life has flourished in a renaissance of individuality, queer people often now find themselves bolder than Pride events allow. Why should queer people restrict themselves to a 1980s or 1990s version of Pride just because that’s where the straight lag of acceptance finds comfort? Every year, straight people ask “What about straight Pride?” but that’s what they’re already getting: the straight version of Pride.

Pride is a tool for growth, not an end-state. Speak your pride. Direct your pride. Unleash your pride. Let people know what exactly gives you pride. Are you proud of the confidence you’ve found in bottoming? The Faustian balance you’ve struck with GHB? The success of your throuple? Of always finding the light in a locker room selfie? Maybe you’re proud that you can embrace cuddling without tumbling into sex. Maybe you’re proud of finally accepting your body. Maybe it’s sober sex. Or calling out your boss’ or roommate’s or waiter’s homophobia the moment they spoke it. Or speaking up at the PTA meeting. Or maybe you’re just proud that your queerness has survived the pandemic.

It doesn’t even have to pinpoint so precisely. “The older I got, the more creative I got, the more I looked to my heroes, the easier it was for me to be myself, really,” said Kevin Abstract in a 2021 interview with Esquire. A Black, gay rapper and member of the music collective Brockhampton, he added: “I didn’t realize how difficult it was until I got older and suddenly I wanted to actually be myself—be these things I’m feeling.”

But if you’re struggling to detail your pride and figure out who you are beyond your pride, consider the legit, bracing post-pride confidence of the messy sex scenes in Ocean Vuong’s On Earth We’re Briefly Gorgeous. Or the no-fucks fun of Lil Nas X giving Satan a lap dance. Or the wholesale demolition of typecasting by Bowen Yang. Two thirds of the pandemic’s Pulitzers for drama have gone to gay Black stories. Own it. Whatever it is that gives you pride, say it. Seize it. Shout it. Silence is death. But worse than silence is making noise—as in, a drag queen who has to command a crowd to “make some noise!”—when your heart and mind and soul have so much more to say than “wooooooo!”