As you may very well know, the fantasy TV wars are in bloody, beautiful swing. HBO’s House of the Dragon and Amazon’s The Lord of the Rings: The Rings of Power debuted 12 days apart from each other. We first saw the long-awaited Game of Thrones prequel series on August 21—which turned out to be just as gruesome as we expected—and the zillion-dollar-budgeted Tolkien adaptation, Rings of Power, on September 2. Fast-forward a few weeks and both series are in full motion: House of the Dragon is five episodes in; Rings of Power has four in its knapsack. (Or wherever Hobbits keep their valuables.)

Here at Esquire, we recap both series week to week. Josh Rosenberg, who would very much like more dragons in his life, handles House of the Dragon. On the other end of the fantasy pond, Adrienne Westenfeld—who knows so damn much about Tolkien that I’m convinced she was an elf in a past life—covers Rings of Power. So you know what I had to do, right? If HBO and Amazon are locked in a battle, then it only makes sense that our resident experts throw down, too. Now, I present to you: a debate between Adrienne and Josh, which nearly got as heated as the inside of a musty jousting helmet.

Brady Langmann: All right, both of you play nice. I want to keep this simple to start. Which show speaks more powerfully to the real world?

Josh Rosenberg: Rings of Power looks and sounds beautiful. That $1 billion is certainly in use, but the series isn’t really saying a whole lot so far. It’s a story of good vs. evil, but evil is merely just lurking in the shadows. In fact, everyone keeps telling our heroes that Middle-earth is currently in peacetime and that evil has been eradicated. This certainly does not reflect our world. The current moment feels like we’re damn near facing extinction, not having to prove that there’s still evil worth seeking out. It’s right here, in front of our faces. It’s the great eye of Sauron, spreading fear. House of the Dragon has the opposite problem. Visually, it’s very dark and grimy–nothing pretty to look at. We’re sitting in musty castles and battle-worn beaches. While the sights aren’t stunning, the plot is very driven. Sure, it’s another series about bickering monarchs–with a B plot about the women who suffer under medieval patriarchy–but at least it presents its volatile and disgusting evils right up front.

Adrienne Westenfeld: Josh, you’re right about one thing: we live in times that would make even Sauron shudder. In that spirit, what good is feel-bad TV like House of the Dragon doing us? Whether it’s Game of Thrones, True Detective, or The Walking Dead, I’m tired of prestige TV’s relentless bleakness. That’s where Rings of Power comes in: House of the Dragon wants to hurt you, but Rings of Power wants to heal you. You argue that Rings of Power “isn’t really saying a whole lot so far”—and I couldn’t disagree more. It’s saying what Tolkien has always said: that power is a dangerous addiction, that goodness is hard to cultivate and harder to maintain, that only through altruism and collective action can we beat back the tide of darkness. House of the Dragon’s horrors are entertaining, but its grim world of violence and bloodlust is not the fictional tonic we need. 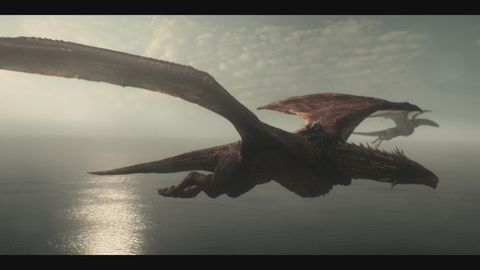 “The only difference is dragons,” our Rings of Power writer quips of the difference between Game of Thrones and House of the Dragon,”and even then, we’ve hardly seen any of the beasties.”

JR: Is House of the Dragon not also about how “power is a dangerous addiction?” Everyone who seeks power in Westeros is punished. The Iron Throne is even a giant metaphor, cutting those who sit on it! Jon Snow’s quest to unite the realm against the White Walkers was also the exact “collective action” we need to “beat back the tide of darkness.” Let’s also not forget that when Galadriel isn’t being a shining beacon of hope, her mission is to kill every last orc in Middle-earth. Weren’t orcs at one time elves themselves–kidnapped and horribly, genetically deformed? Is there no salvation for her once-kin?

AW: Is it really fair to give House of the Dragon credit for those themes when Martin all but lifted them from Tolkien, the godfather of modern fantasy? I never said that Galadriel was a beacon of hope—like all the best characters, she’s complicated! All I’m saying is that I’d rather spend time in the Tolkienverse, where we experience the full spectrum of feeling, than the Martinverse, where we’re keelhauled with brutality week in and week out. Tolkien is all about the duality of lightness and darkness, but with Martin, it’s just ink-black darkness, all the way down. Also, I didn’t peg you for an orc sympathizer, Josh. I’m disappointed.

BL: Give some love to the orcs, Adrienne. OK, both House of the Dragon and Rings of Power are obviously huge IP power plays. Which one, you know, is less soulless about its quest for world domination?

JR: George R.R. Martin’s direct involvement in House of the Dragon as an executive producer is probably the only thing keeping us so grounded in the source material thus far. Thrones’s final downfall was that the showrunners had to pick up where Martin’s books left off. They failed. Miserably. House of the Dragon, however, is a complete story. Its major plot points are all mapped out already in Fire & Blood, and what the new showrunners have done to flesh out the dialogue feels right at home in the world of Westeros. Rings of Power’s development is odd in that its rights were acquired through some complicated loophole with Middle-Earth Enterprises, who own the publishing rights to Lord of the Rings. Because of this, we not only have a lot of original characters, but also a story technically derived from the appendices of The Lord of the Rings. Certain things, like watching Galadriel be a badass, will delight fans. And yet, we can’t pretend that there’s a lot of story to cover here. For all the flack that Peter Jackson’s four-hour-long extended cuts got, he covered more in one film than what Rings of Power has given us so far.

AW: My friend, what you have to understand is that Tolkien tells stories in geological time. The history of Westeros stretches back about 12,000 years, but Tolkien’s chronology of Middle-earth spans a staggering 55,000 years. It’s not just that the world is much, much older; it’s that its inhabitants age differently, meaning that stories unfold around lives that last centuries—or in some cases, lives that never end at all. If it feels slow or directionless, that’s because you’re not thinking on Tolkien’s cosmic scale. Rings of Power really has its work cut out for it, timeline-wise: Peter Jackson packed a 16-month quest into his films, while Rings of Power is packing centuries of Second Age history into fifty hours of TV. No doubt the timeline will be futzed and compressed, but what you call a side quest, I call the beginnings of a five-season character journey. Patience, grasshopper!

I’ve been waiting for The Winds of Winter for over a decade–I know patience.

JR: 55,000 years or one million years–what I’m seeing from Rings of Power so far is a bunch of characters scattered around without a clear goal in sight. LOTR is a fantastic journey about a young hobbit who liked eating, drinking, sleeping, dancing, and basically anything a normal, peaceful dude would do. The hobbits were us, and we were taken on a magical journey throughout Middle-earth discovering wizards and dragons. Now, we have to wait possibly an entire season of TV just to find out that “the Stranger” is Gandalf with amnesia?! I’ve been waiting for The Winds of Winter for over a decade–I know patience. Rings of Power is simply a story about how everyone gets embarrassingly duped by Sauron into making magical rings that are all controlled by his one true ring. We all know this ends with Isildur just fumbling the bag! At least with House of the Dragon, we get surprising twists!

AW: Thrones didn’t teach you about patience—it taught you about instant gratification. Why should Rings of Power be held to the same narrative conventions as LOTR? It’s fine to dislike Rings of Power, but it’s not reasonable to expect it to unfold like LOTR. It’s a different story about different people, told on a different scale. Let it live!

“Rings of Power looks and sounds beautiful,” says our House of the Dragon beat writer.“That $1 billion is certainly in use, but the series isn’t really saying a whole lot so far.”

BL: Break it up, nerds. Tell me: which show is better at giving fans what they want?

JR: Oddly enough–even after all that criticism–Rings of Power gives fans more of what they’re looking for. The fandom not only runs way deeper than Thrones, but LOTR had a much longer history with successful film adaptations. Not to mention the fans of Tolkien’s books. When you think fantasy, you think Tolkien–elves, orcs, wizards, dwarves, etc.–and The Hobbit being largely children’s novels has certainly made it an easier jumping-on point than anything Thrones. Fans are already clamoring about finally seeing Numenor, visiting the dwarf city, and taking the boat to Valinor. Both new shows are without a doubt just more Thrones and more LOTR, but more LOTR on-screen means a lot more to its fans than it does for the Thrones faithful. George R.R. Martin heads would much rather see the author finally finish the books.

AW: Is this even a point of debate? House of the Dragon makes a big fuss about how it’s different from its predecessor (More Targaryens! Less sexual violence!), but really, it’s just a rehash of familiar storylines, like jockeying for the Iron Throne and vicious backstabbing among family members. The only difference is dragons, and even then, we’ve hardly seen any of the beasties. Meanwhile, Rings of Power is a decades-old legacy property that somehow manages to tread completely new ground. It’s thrilling to finally lay eyes on parts of the world that fans have always longed to see, yet at the same time, the show excels at expanding Tolkien’s lore without disrupting it. Rings of Power took Tolkien’s appendixes—essentially a thinly-sketched plot outline—and enlarged it into five seasons full of thrills. Meanwhile, George R.R. Martin can’t finish a single book.

BL: Both HBO and Amazon are bragging about numbers. Give it to me straight—which series truly has the world’s attention?

JR: Game of Thrones is really just that show–it’s insane, violent, shocking, filled to the brim with political drama, back-stabbing and twists. House of the Dragon continues that legacy. Turns out, making Succession less based on reality (and adding dragons) makes for the most watched premiere in HBO’s history. “Oh my god! Did you see that last night?” is the best kind of word-of-mouth press you can get. It’s also exactly the kind of week-to-week excitement that has felt missing throughout the streaming wars ever since Thrones wrapped up its final season.

AW: I hate to say it, but I’ve got to give this one to House of the Dragon. Rings of Power is making inroads with Tolkien fans, fantasy lovers, and devotees of prestige television, but it’s not a watercooler show. What does it say about us as a society that we’d rather see a woman literally eviscerated in childbirth than gather around a campfire with the Harfoots? But don’t count Rings of Power out just yet—it’s got four more seasons ahead to conquer the world.

Josh Rosenberg is an entertainment writer living in Brooklyn, keeping a steady diet of one movie a day; his work can be found at Spin, Insider, Vibe, and on his personal blog at Roseandblog.com.