There’s no denying it: Under the creative direction of Brendon Babenzien—the founder of Noah and the former design director of Supreme—J.Crew’s menswear is well and truly back in the mix. It has people talking. It has them excited, even. It’s convinced guys from all over the country to buy Giant Chinos in droves, pull on tweedy blazers without a hint of irony, and reconsider what the mall mainstay can do for their wardrobes. Beefed up, built better, and tweaked just so, this new version of J.Crew men’s isn’t so much a transformation as an evolution, as Babenzien will tell you. But in small-seeming measures like upgrading fabrics and shifting fits, he’s turned the menswear offering into something guys actually want to wear.

Next up, naturally, is cooking up some collaborations. There’s already a team-up with Tracksmith, which runners are sure to get hot and bothered about. But for the niche menswear-heads, the news that J.Crew has a new lineup of goodies releasing with cult-favorite Japanese label Beams Plus will likely be even more welcome. For those uninitiated, Beams Plus specializes in reworked takes on classic Americana, informed heavily by prep and military staples. Sound familiar? But where J.Crew tends to keep things a little more traditional, Beams Plus isn’t afraid to freak it. Which is why, Babenzien says, the brand is “a perfect fit” for a partnership.

Here, he tells us how the collection came together, names a few of the standout pieces (even though “it’s hard to pick one”), and delves into what’s next for J.Crew. 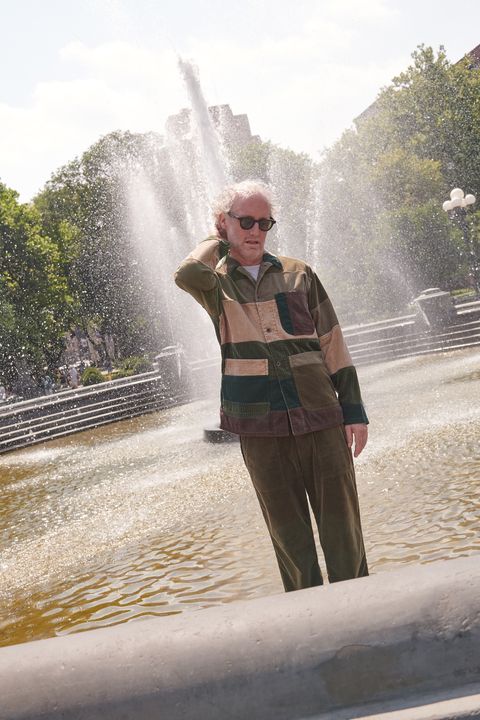 How does this collaboration fit in with the overall work you’re doing at J.Crew?

Our own design team has things in hand here and is incredibly talented, but we also really like this idea of reaching out beyond ourselves to see how others either view or have viewed the brand, what they think about, and how they see us. So when we were coming up with lists of people to potentially work with, Beams Plus was at the top of the list. Because basically they’re doing historical American clothing. They do a lot of things that are based on prep culture, U.S. military clothing, things like that. So they just seemed like the perfect fit.

And it’s kind of fun because there are certain things I won’t touch. I just won’t go there because J.Crew, for me, has certain guidelines and guardrails. But when you let someone else touch it, it’s from their point of view, so they might be able to take it to a place where you wouldn’t. And that’s how we were thinking of it with Beams Plus. We were like, “They’re phenomenal at understanding American clothing culture, but they might twist it in a way that we wouldn’t. So let’s see what happens.” That was the thinking. And we gave them some creative direction. We gave them an idea, which was basically like, “Hey, you do preppy incredibly well, you do military incredibly well. What happens if you actually put those things together in garment form?” And yeah, that’s what we did, and I think they’ve done an incredible job with it. 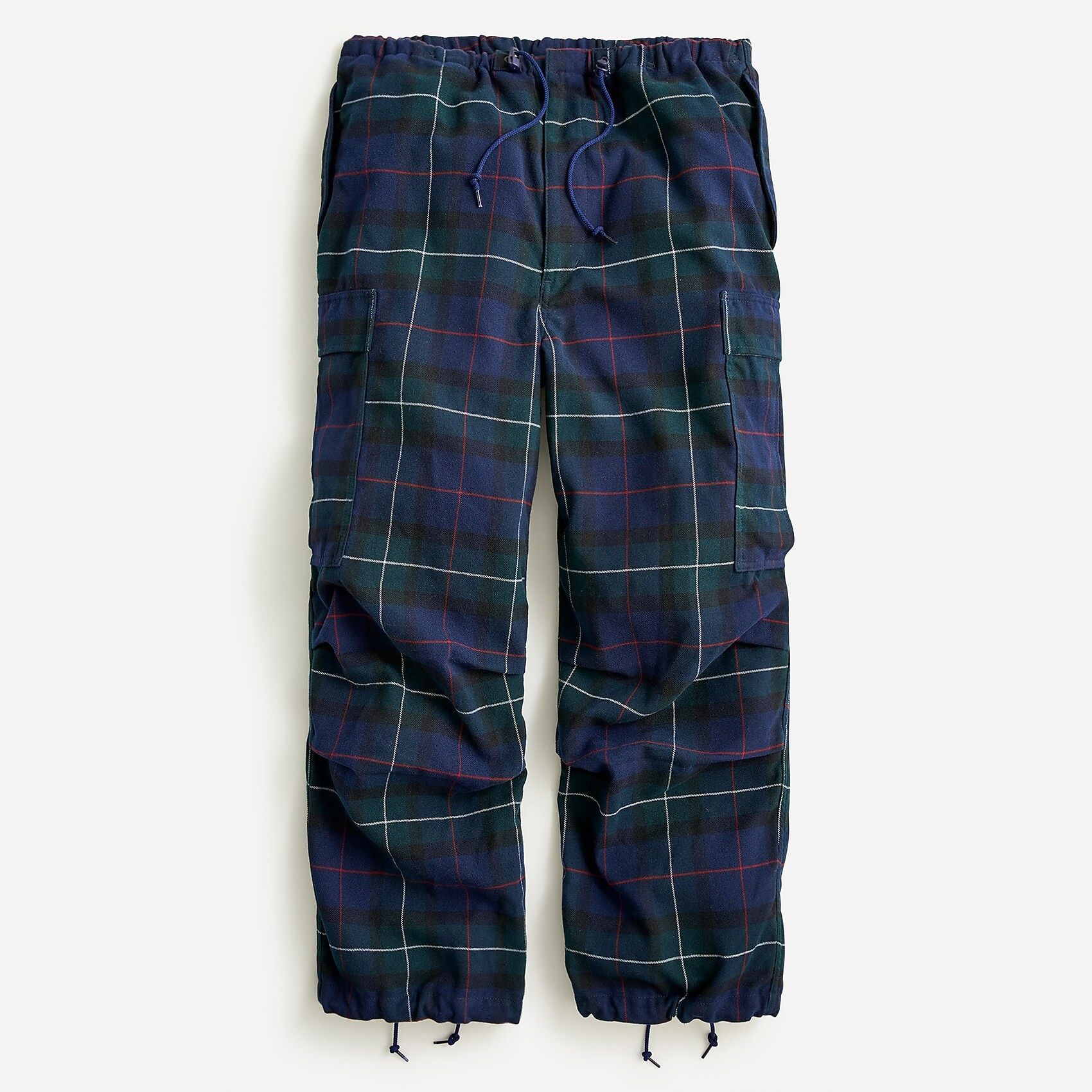 Are there any specific examples of products that jump to mind that go to a place you wouldn’t have but make sense coming from Beams Plus?

Yeah, they have this oversized kind of cargo—almost an over-pant. It’s like a cargo that you might pull over another pant historically, I think, in military clothing. And it’s pretty extreme in the fit and they’ve done it in a tartan. So when you first hear about it, you’re like, “Well, that sounds a little crazy.” But when you put it on, you’re like, “Oh, this actually looks really cool.” And the tartan is so traditional, it kind of grounds it, even though it’s an extreme fit. The tartan brings it back to this kind of traditional mentality, which is super cool. That was something that we probably wouldn’t do on our own here. But coming from Beams Plus, you’re like, “Well, that makes perfect sense.” 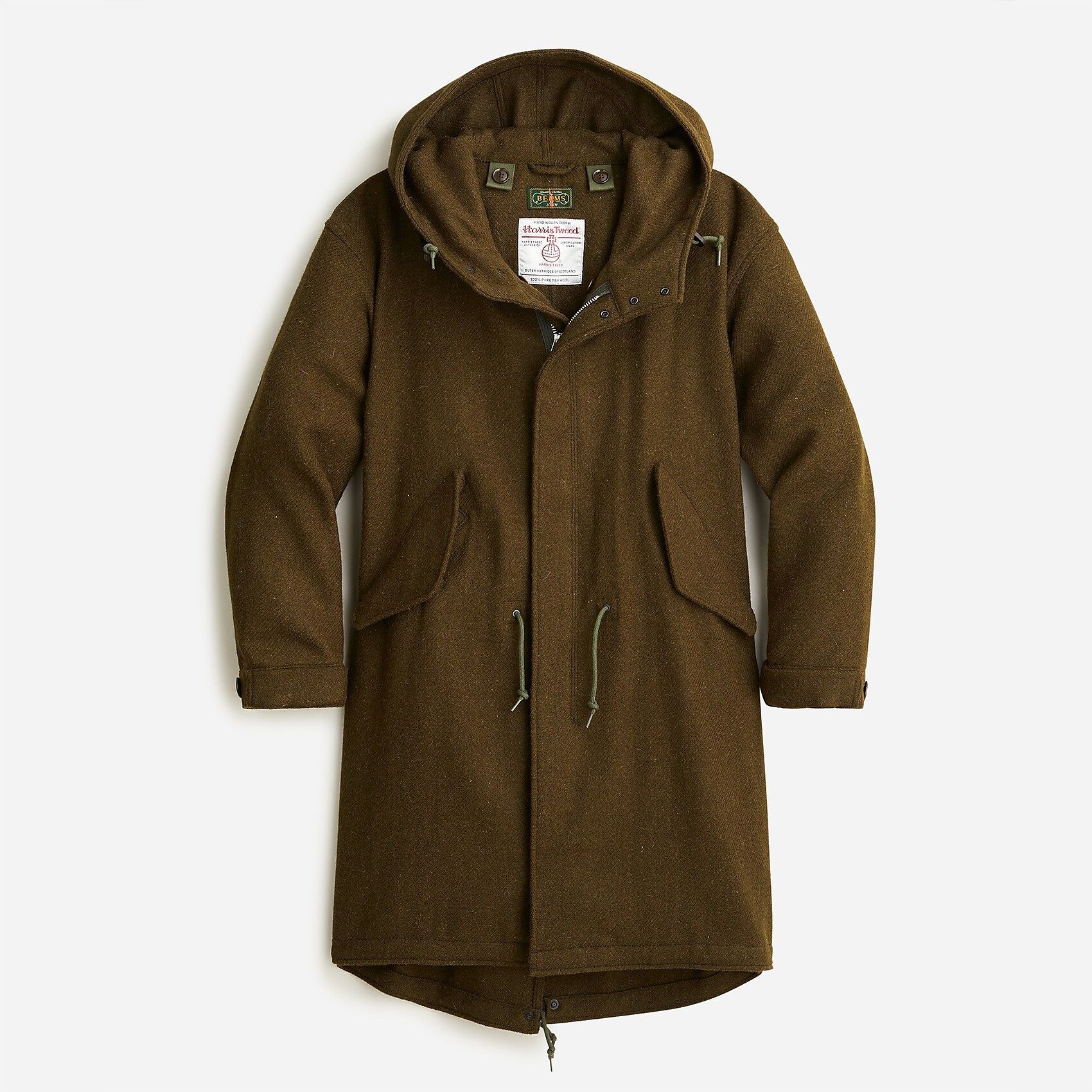 Any other pieces that strike you as particular standouts?

They did a Harris tweed fishtail parka. A classic kind of mod, parka-style thing. And they just picked a great olive green from Harris [Tweed]. So even though Harris isn’t really military, the color of the cloth and the fact that it’s wool—because many years ago a lot of military stuff was wool—it looks totally believable, almost like it’s a vintage piece. I thought that was executed really, really well. But honestly, all of the pieces are super cool, so it’s hard to pick one. 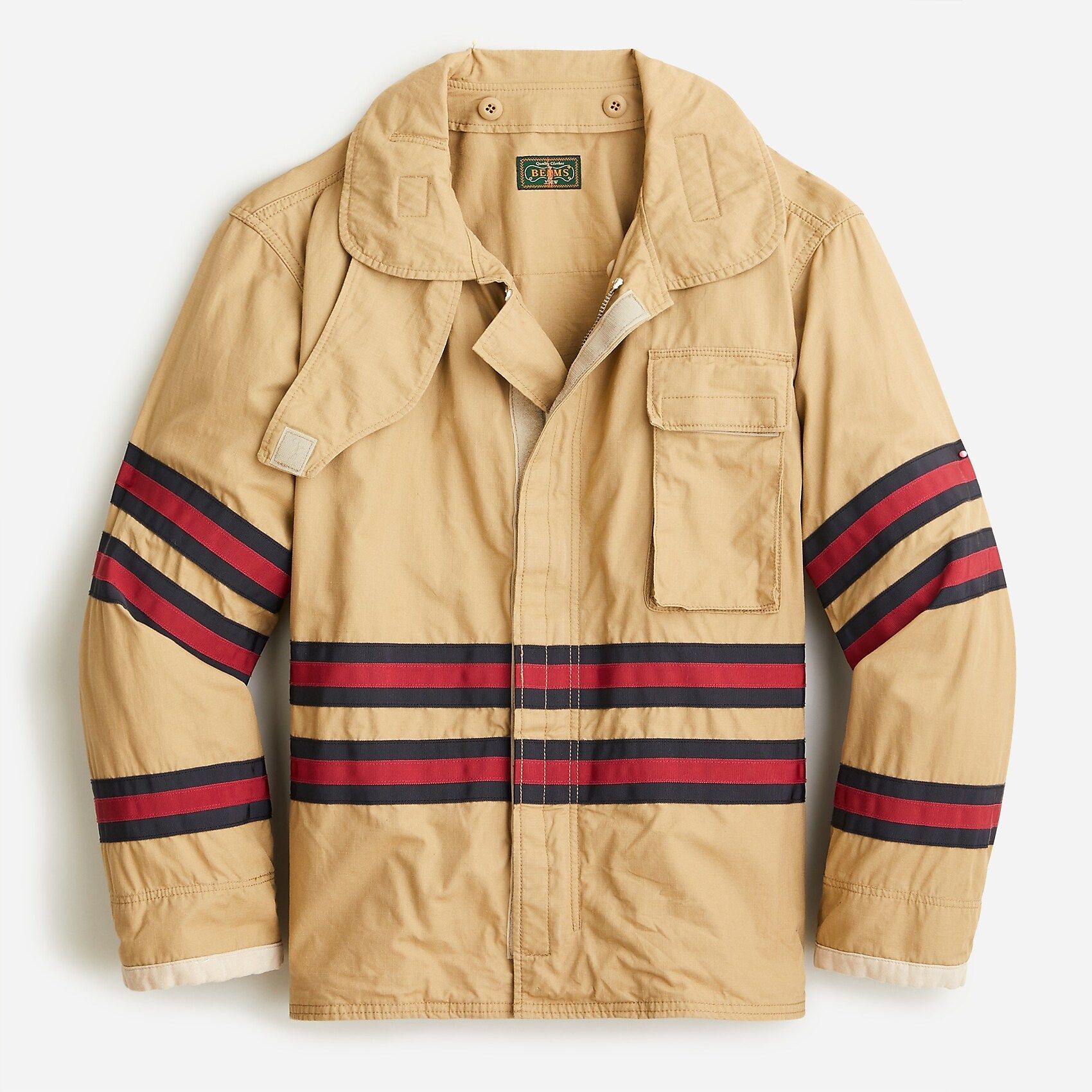 Is it a little bit of a “I love all my children equally” sort of situation?

Yeah, I guess so. But they’re super clever and there’s this weird… I don’t even know what it was to be honest, but I think it was for army mechanics or maybe a guy who works on a runway or something: a jacket with safety stripes. And they replaced the safety stripes with navy and red, so it looks really traditional, almost school-uniform style. I thought that was a clever approach to that piece. 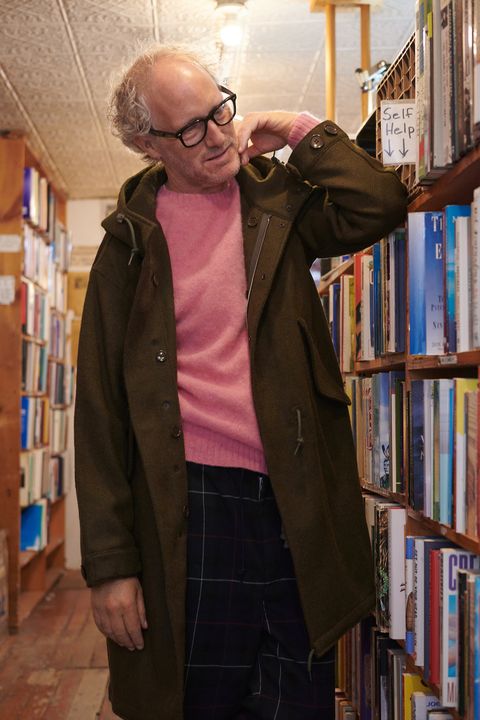 Mike Mills in the Beams Plus x J.Crew collab.

When you think about the J. Crew customer and how they’re going to react to this stuff, is it one of those things where it’s going to make perfect sense? Or is there a learning curve when it comes to interpreting some of this clothing?

Well, I think there are customers of ours that will fully understand it immediately. We have such a broad customer base, that there’ll also be some people who can’t even wear it. They’ll just be like, “Well, that’s just not for me.” And then there’ll be others who are like, “Yeah, I’ve been to Japan. I’ve seen Beams Plus. I’m looking for something new. This is right up my alley.” And then there’ll be customers that probably don’t shop with us at all, who actually come for the Beams Plus capsule because they know Beams Plus and it’s a little bit different than what they normally see from J. Crew.

So I think, when you take the entire landscape of the market all in, I think there’s plenty of people to come buy this stuff. And I’m not terribly worried about our current customer being afraid of it. I think there’s a lot of people ready for this kind of product. 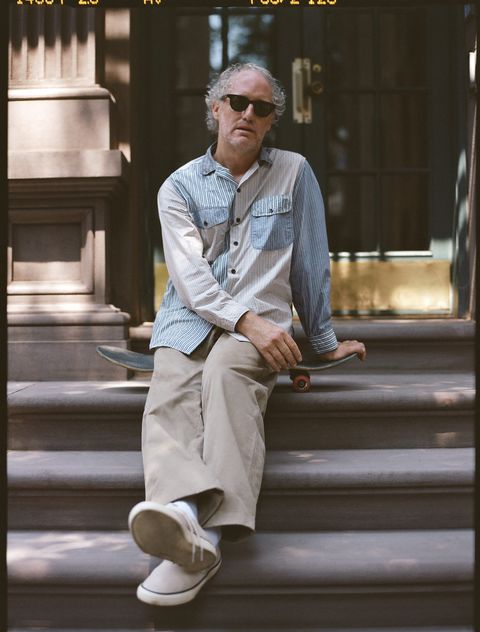 It feels like there’s a sense of connection between the fall’s designs that have rolled out already from your team and the stuff that is in this Beams Plus collection. It doesn’t feel like a leap. It feels like a comfortable step outside of, like you said, the guardrails that you’ve put in place for yourself.

Yeah, look, this type of clothing always has a place in the world. And I think the differences from, say, what J.Crew might have been doing before I arrived and what we’re doing now, they’re so subtle. This is a conversation in subtlety. That’s all this is. It’s a color selection. It’s a slight change in fit. It’s picking this plaid over that plaid. These are tiny, little movements that we’re making. They are not sweeping changes at all.

But for me, no matter where I’ve been or what I’ve done in design, it’s always been about subtlety. It’s always about just making the right choice at the right time. It’s really not terribly complicated. 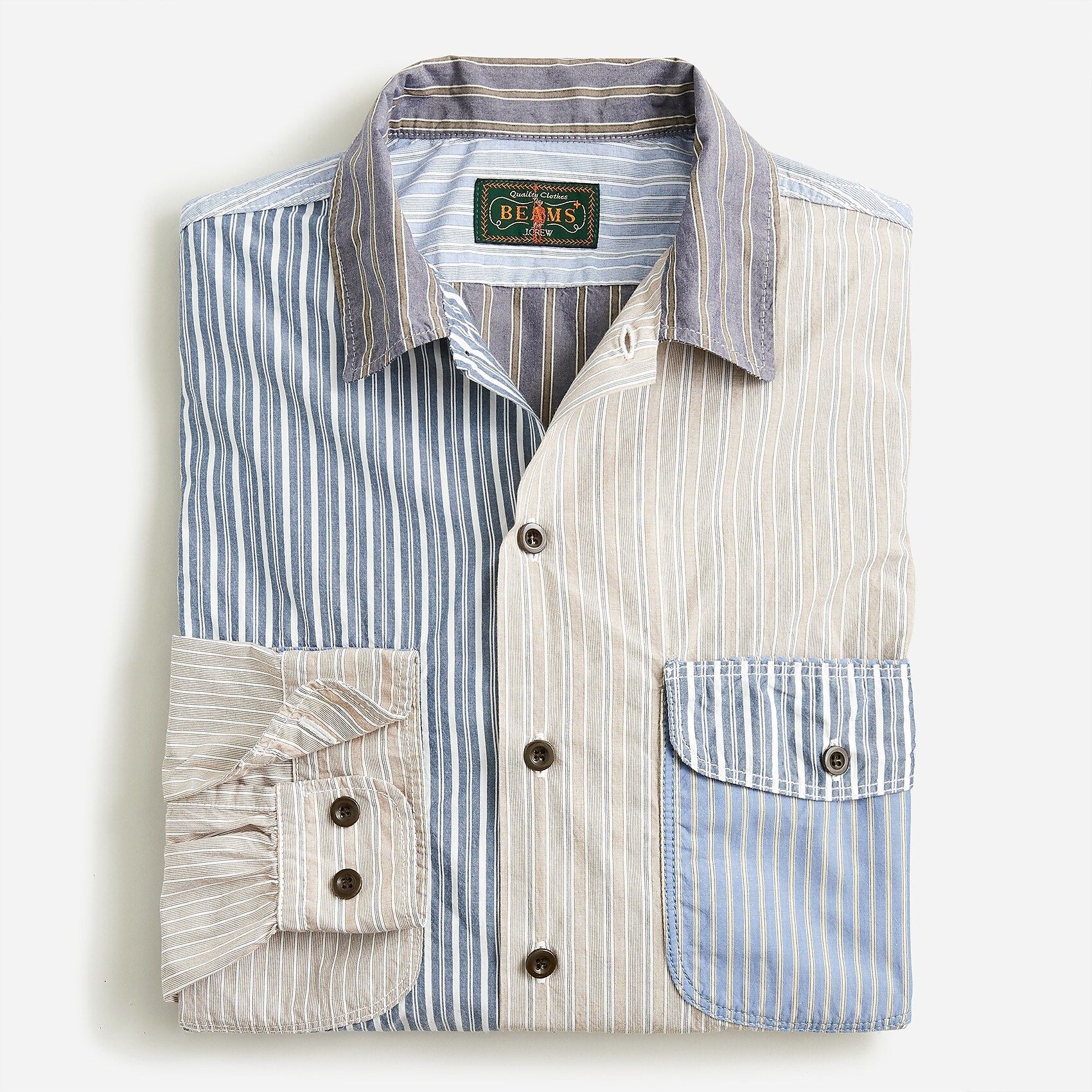 This is one step in a larger project, so I guess I’m curious to know: As you evolve the J.Crew menswear universe, how are you hoping to see it change, even if it is subtly, from where it’s been to where it is now to, let’s say, the upcoming spring or the upcoming fall?

I think when you start to talk about change, there’s this massive expectation that comes with that. Everyone’s expecting to really see the difference. It’s like, “Oh, it’s a totally new thing.” And honestly, that’s not the intention here at all. This is a brand that’s going on 40 years old that’s been massively important to American style and what people grew up with and wore for a very long time. So, I’m not really that even interested in talking about change so much. It’s more like being the best version of ourselves that we have been already. We’ve been here, we’ve been doing this. It’s not a rebrand. It’s like, “Let’s just make the right choices, and let’s just put out good product, and let’s deliver a message that is appealing to people.”

So I don’t know if “change” is even the right word. I don’t have the correct word at the moment to replace it, but I don’t think “change” is it because we’ve already been doing this for a really long time. We’re just going to continue doing it, and we’re going to do the best version of it.