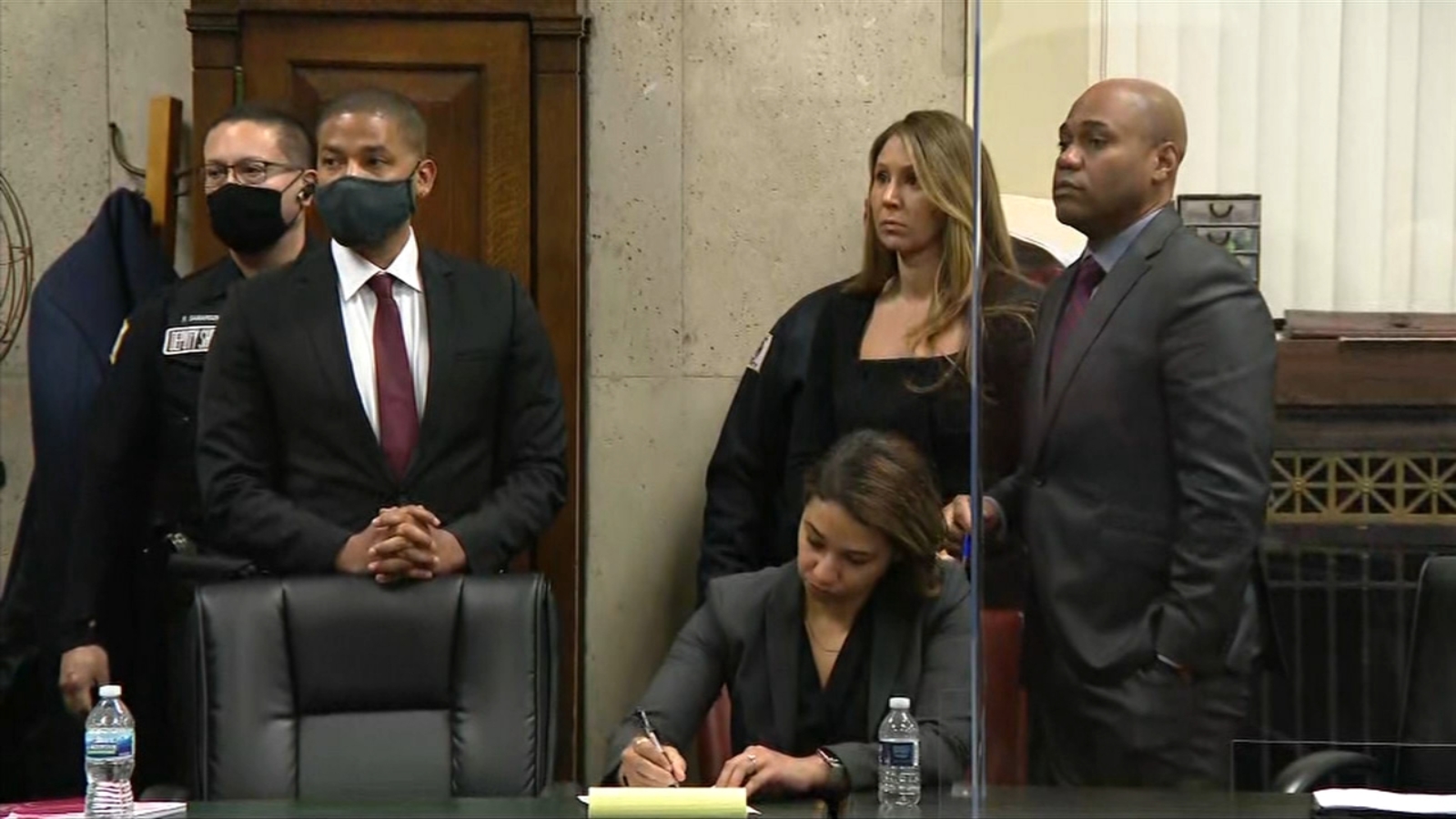 CHICAGO (WLS) — Jussie Smollett’s legal team is working to get him out of jail after filing a formal notice of appeal Friday.

Smollett spent his first full day behind bars Friday after a judge sentenced him to 150 days, or five months, for lying to police about a fake hate crime he staged against himself.

Smollett’s attorney’s spokesperson said late Friday his legal team has filed an emergency injunction seeking his release from jail during the appeal process. An appellate court judge ruled prosecutors have five days to respond to the emergency motion.

For now, Smollett is in protective custody at Cook County Jail, the Cook County Sheriff’s Office said in a written statement. That means he is “housed in his own cell, which is monitored by security cameras in the cell and by an officers wearing a body camera who is stationed at the entrance of the cell to ensure Mr. Smollett is under direct observation at all times.”

“He’s a high-profile defendant,” ABC7 Legal Analyst Gil Soffer said. “And if there is anyone who’s safe in jail, who the authorities want to make sure is safe in jail, it’s him.”

As expected, Smollett’s defense attorney formally filed a notice of appeal Friday. Soffer has been watching this case and does not see grounds for an appeal to likely be granted.

Thursday’s hearing ended dramatically as Smollett got up from his seat and declared his innocence and his concern for his own safety.
The 39-year was expressionless, and his family and others, in the courtroom were stunned as Cook County Judge James Linn handed down sentencing.

“You will spend the first 150 days of your sentence in the Cook County Jail, and that will start today. Right here, right now,” Judge Linn said.

During the sentencing, Linn referred to the extensive litigation and thoroughness of the attorneys before, during and after trial. And he emphasized that the sentence was based on only what was presented in court and not the attention to this case.

“People seem to care about this. People care passionately for a variety of reasons in this case and the reasons are many,” Linn said. “And let me be clear: the sentence I put forward and render down to Mr. Smollett is not in any way to assuage any public sentiment.”

In considering the sentence, Linn said Smollett’s “extreme” premeditation of the crime was an aggravating factor. He also said the actor had denigrated the experiences of real hate crime victims, calling him a “charlatan” and a liar.

“You got on the witness stand. You didn’t have to. You did. You certainly had a right to. But you committed hour upon hour upon hour of pure perjury,” Linn said.

In a statement, Reverend Jackson also claims the judge’s explanation of the sentence, “indicated judicial bias and character assassination of Smollett.”

“You have another side of you that is profoundly arrogant and selfless, selfish and narcissistic,” Judge James Linn told Smollett at sentencing.

“He did not do anything that was inherently wrong or violate any canon of ethics or otherwise,” Soffer said. “He spoke sternly. He spoke strongly. And we don’t typically hear words quite that forceful from a judge, but he had the right to say it.”

But Soffer said he would not be surprised if Smollett’s legal team used the judge’s comments to fight the actor’s conviction and sentence.

“I don’t think that kind of argument gets them anywhere,” Soffer said. “The words were strong, but they were not so untempered and so out of bounds that they cast doubt on the judge’s independence or lack of bias.”

While in jail, Smollett also begins 30 months of probation in addition to being ordered to pay more than $120,000 in restitution to the city of Chicago and a $25,000 fine.

The city filed a federal lawsuit alleging the cost to investigate Smollett’s hoax hate crime was $130,000.

Even though the actor was ordered to pay restitution as part of his criminal sentence yesterday, the spokeswoman for the City of Chicago’s Law Department said Friday: “The City will consider its options in light of Judge Linn’s sentencing order. The Law Department has no further comment as this matter remains in litigation.”

The sentence came three months after Smollett was convicted of five counts of felony disorderly conduct for lying to Chicago police.

“I didn’t think it would be quite this long, but the judge made clear he sees this offense more than just a minor felony, he sees it did damage to hate crime victims everywhere,” Soffer said.

Smollett asked to be placed in protective custody and Linn signed an order requesting it, according to court documents filed after the hearing. The decision, though, is ultimately up to the sheriff’s office, which runs the jail and has wide latitude in how it manages the population of just over 6,000 detainees.

Smollett is being housed in his own cell, which is monitored by security cameras and by an officer wearing a bodycam to ensure he is under direct observation at all times, according to the Cook County Sheriff’s Office.

“Mr. Smollett is not being held in solitary confinement. The use of solitary confinement was abolished at the Cook County Jail in 2016, and any claims that he is being held in this manner is false. Mr. Smollett is being housed in his own cell, which is monitored by security cameras in the cell and by an officer wearing a body worn camera who is stationed at the entrance of the cell to ensure that Mr. Smollett is under direct observation at all times. As with all detained persons, Mr. Smollett is entitled to have substantial time out of his cell in the common areas on the tier where he is housed, where he is able to use the telephone, watch television, and interact with staff. During such times out of cell, other detainees will not be present in the common areas. These protocols are routinely used for individuals ordered into protective custody who may potentially be at risk of harm due to the nature of their charges, their profession, or their noteworthy status. The safety and security of all detained individuals, including Mr. Smollett, is the Sheriff’s Office’s highest priority.”

The action is neither unexpected nor unusual. High-profile and other at-risk detainees are usually kept segregated from the jail’s general population.

The Cook County Sheriff’s department is evaluating Smollett and where and how he should be housed while serving his sentence. It is likely Smollett may only serve half of the 150 days if he gets credit for good behavior.