On Thursday, the Princess of Wales stopped in Scarborough and was greeted by a cheering crowd lined up outside the Rainbow Centre, a community organization in the coastal town. One woman in the gathering gave Kate Middleton what might be the highest compliment anyone can come up with.

As Kate stopped to shake hands with her, she said, “I’ve missed my hair appointment to come see ya.”

“It looks wonderful anyway,” the princess replied, making the crowd laugh. She then stopped to take selfies with her fans.

Prince William and Kate were in Scarborough to launch a funding plan to support young people’s mental health. The £345,000 worth of funding was created by a collaboration between The Royal Foundation of The Prince and Princess of Wales and the Two Ridings Community Foundation, and has been divided amongst local organizations. 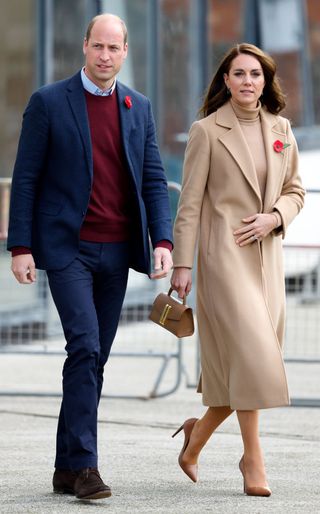 “Ensuring that young people have access to a wide range of mental health support is something that The Prince and Princess of Wales feel extremely passionate about,” said Amanda Berry, the CEO of The Royal Foundation of The Prince and Princess of Wales, in a statement. “Tackling the stigma around mental health and ensuring that help is there for those who need it continues to be one of society’s biggest issues.”

William made a speech at Two Riders Community Center, though he was adorably interrupted by an excited little girl in a moment captured by Greatest Hits Radio Yorkshire Coast who shared it on Twitter.

William eventually managed to say, “For Catherine and I, the legacy of today, bringing people together and collaborating, showing what can be done when a community helps together collaboratively is something we’d like to follow on and I hope can be represented more widely across the country.”