Nearly two decades after it was first optioned, The Devil in the White City is finally making its way to a small screen near you. That being, if Hulu can find a new star. Just two months after it was announced that Keanu Reeves would be leading the eight-part limited series, the John Wick star has reportedly already pulled the plug. Sources close to the adaptation of Erik Larson’s bestseller told The Hollywood Reporter that Hulu was already searching for a new lead following Reeves’s departure.

The limited series, which has been in development for over a decade, excited fans when Hulu made the official announcement back in August. The Devil in the White City will depict serial killers, “murder castles,” and carnivals. It now just needs an all-new A-list star. Read on for a full breakdown of everything else we know about the series thus far.

What Is The Devil in the White City About?

Published in 2003, The Devil in the White City is a work of historical nonfiction set at the 1893 Chicago World’s Fair. There, an architect and a murderer collided during the historic fair. The architect was Daniel H. Burham, the visionary designer of structures like the Flatiron Building in New York and Union Station in Washington D.C., who overcame tremendous obstacles to transform a swampy patch of land into the fair’s White City. The murderer was Dr. Henry H. Holmes, America’s first modern serial killer, who notably constructed the notorious “Murder Castle” in the fair’s shadow, which contained a dissection table, a gas chamber, and a crematorium. The Devil in the White City spins a spellbinding tale of how these two men’s lives intersected.

Vintage The Devil in the White City 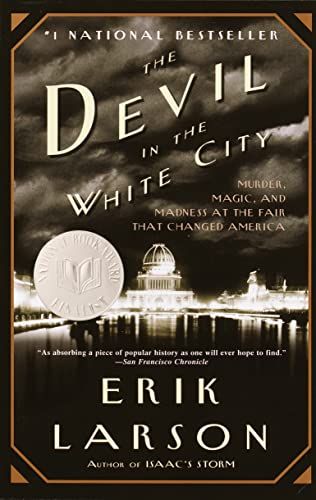 Vintage The Devil in the White City

What Is The Devil in the White City’s Path to the Screen?

It’s been a long and winding road for The Devil in the White City to land at Hulu. Way back in 2003, Tom Cruise snatched up the rights and attached Kathryn Bigelow to direct, but both ultimately parted ways with the project. In 2008, Eric Roth (the writer of Forrest Gump) wrote a script that reportedly interested David Fincher, but the project once again fizzled. Then, in 2010, Leonardo DiCaprio’s Appian Way Productions acquired the film rights. In 2015, Martin Scorsese came aboard to direct, but it wasn’t until 2019 that the project ultimately headed to Hulu. Now, three years later, The Devil in the White City is once again in development hell.

Reeves was previously set to star as Daniel H. Burnham, as well as serve as an executive producer. Two months after making the announcement, however, The Matrix star left the project. Seems like everybody and their brother wants to be an executive producer—the list includes Scorsese, DiCaprio, Rick Yorn, Jennifer Davisson, Stacey Sher, Sam Shaw, Lila Byock, Todd Field, and Mark Lafferty. Shaw is writing the script and will serve as showrunner, while Field will direct. You may know Shaw from his work on Castle Rock and Masters of Sex, while Field has written and directed plenty of projects, including Little Children and the upcoming TÁR.

When Will The Devil in the White City Come Out?

We’re going to have to wait quite a while for this one, especially now that Reeves is out. Production was previously set to commence next year, but it’s tough to tell if we’re still looking at a 2024 release date now that their star has to be replaced. By then, you’ll surely have time to read the book first.