It’s a bright and chilly Saturday afternoon in the Lower East Side. Down in the gap between the Brooklyn Bridge and the Manhattan Bridge—aptly named Two Bridges—the team at Polaroid has gathered a bunch of young local artists and skateboarders for a photo assignment. Geared up with a Polaroid Now and two packs of film, Brain Anderson leads the group on a tour around the neighborhood.

Starting at LES Skate Park, the proving grounds for many young skaters, I get a few minutes to talk to him about Polaroid and the new Nike SB Dunk paying homage to the legendary photography brand. Anderson is a world renowned skateboarder, a true OG known for being Thrasher’s skateboarder of the year and winner of the World Cup of Skateboarding in 1999. His understanding of community and inclusion has brought a new perspective to the sport and to the younger generation. We touched on everything from vintage film to his sneaker rotation. Read on for an edited and condensed version of our conversation.

Esquire: Polaroid is a big deal, I always think of Polaroid when I was growing up. What was that like for you?

Brian Anderson: Well, I am the youngest of 14; some of my sisters had Polaroids, and I have some fond memories of my sisters and my brother taking photographs. It’s obviously a very iconic brand and creation. You know, yesterday I was talking about it’s just such a unique thing to be walking around and you’re like, kind of this mobile darkroom, you know? So it’s really cool to have this presence come back again and even though it’s kind of always been around. 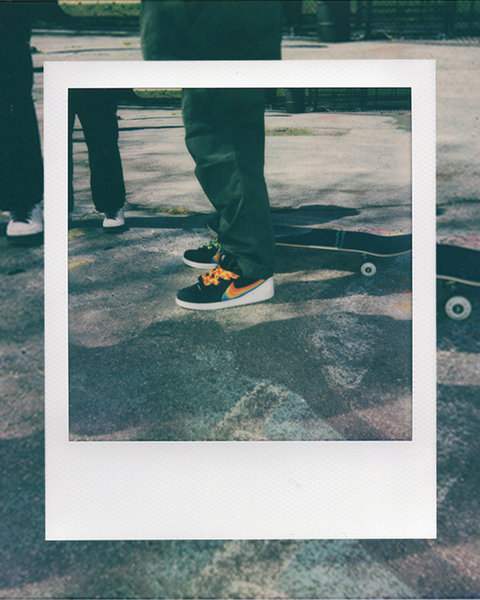 Esquire: There’s this aesthetic of vintage film being used a lot now on social media filters for a younger generation. And I think kids are kind of finding it as a refreshing creative outlet. Do you feel as a creative person, it’s a good medium for the youth to tap into?

BA: Yeah, definitely. And part of that is that film is completely different. A Polaroid is it’s completely different from your phone. A phone is great because it’s getting this new generation of young people to get into photography. But film is cool because you want to be careful with your film, because you know it’s not cheap; it’s just one shot and that’s what’s so cool. You can hold on to it and stare and think about it, what the light was like when you took that picture and should you maybe not use the flash next time? Or, the one thing I always love highlighting is that you can now scan your Polaroids, you can photocopy them and then you can make a zine with them, which I think is so refreshing. I think a lot of teens are getting away from social media. They find it a little too invasive and a little scary and creepy. So my point is that, you do this thing, and it’s for you.

Oh, and check this out: I find when I’m carrying a Polaroid and I ask someone if I can take their photo, they’re way less hesitant than if you asked to take a cell phone picture because they don’t think you’re going to go and use it for social media right away and you tend to get people acting a lot more naturally when it’s a camera and not a phone. So I think it’s really cool for the new generation of kids and young people. It’s a completely different medium and makes you think about the fact that there’s a chemical to develop it in the strip. 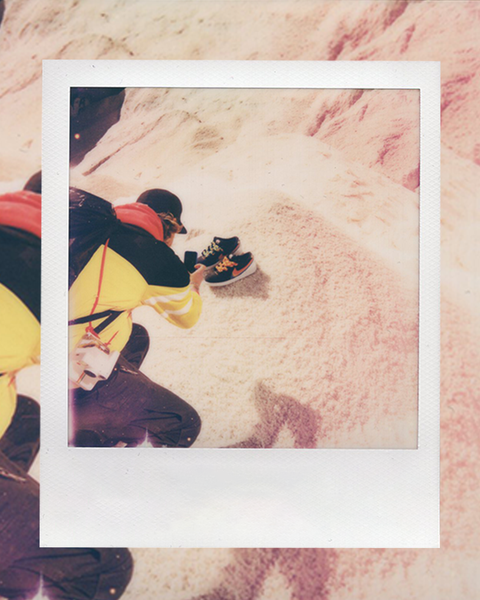 Esquire: That’s a really good point. Being a part of Nike SB, did you ever see this collab coming to life at some point?

BA: Did I think that it might happen? No. Because in the beginning, there weren’t many collabs. I’ve been with Nike for 20 years and I think they even did some that were close to other brands without using them, like there was in quotation marks a “Heineken” Dunk. Which they may have gotten the rights to put that star on there, but who knows. I think there was a Pabst Blue Ribbon Dunk but it was just the colors of the can, there wasn’t any insignia in the mix.

Then, over the years, more brands wanted to work together in general, not even just on a Dunk. More and more people started doing collaborations, and I didn’t see this one coming until I found out about it from my team manager, Ryan Bouvier from Portland. I’m not trying to be overly complimentary, but I think they did a really good job with the features on the sneakers. Especially right down to the red button on the pivot spot of the outsole.

I’m not trying to be overly complimentary, but I think they did a really good job.

Esquire: You’re wearing the Polaroid SBs now but what else is in your sneaker rotation?

BA: Well, I just found out that I’m actually a 14-and-a-half. I’ve been putting my foot in a 13 for my whole life. My 14-and-a-halfs shouldn’t be sitting in a 13, but once I squeeze into a Stefan Janoski and the suede expands it really does fit, like the expression, like a glove. In my rotation there’s also an SB shoe called the Verona, it’s a slip-on. I wore Grant Taylor’s SB; he skates in a Blazer Low. I tried it recently, and because my foot is used to how narrow the Verona and Janoski are, the Blazer also expanded for my big foot and then it felt too loose. They’re great, I just wasn’t used to my foot having all that space. I like Dunks, I rode those for many years before Stefan’s shoe came out.

I’m not trying to plug my old shoes that I did, but that was really fun to have the opportunity to make the Project BA. I miss that because it had Lunarlon in the heel, which was really great cushioning. We don’t have to get into the story behind that, but it was just too expensive and overseas it was pricey.

I don’t really wear a lot of non-skate shoes, but I love having a pair of Prestos. Majorly, because they can stretch. When I’m not skateboarding and I put those on my feet they’re like “Thanks, man.” It’s like a Tempur-Pedic mattress wrapped around your foot. I love a Presto, I have a real crappy pair that are ripped so I can wear them in the rain and whenever, they’re just sacrificed to the streets.

Esquire: I love that. I’m a big fan of the Off-White Presto too.

BA: I do love skating in my rarer sneakers. It’s just kind of fun. Some I save to just floss at a party once a year.

Esquire: If you have the shoe, you should wear it, right?

Esquire: Out of the new-school skaters, who should people be aware of that are probably lesser known?

BA: That’s tough for me. It’s really hard to keep in the know. I’m fortunate to have interests in so many other genres of life. I’m trying to learn a lot about art history and film directors and writers and all these different things. And I’m constantly learning new things—about people’s pronouns and things in the queer world that I’m so happy to pay attention to and always do the best I can to make sure people are comfortable. Choosing the words that make people feel the most comfortable. I have to get a new subscription to Thrasher magazine.

Esquire: That’s fair. Your life is more than just skating.

BA: A lot of my friends will send me links—”checked out this new person”—and it’s so cool. I’m so glad there’s so many more women and trans skaters in the scene. So, oh my god, I have so much homework to do but it’s great. You know, it’s lively and it’s thriving.

Esquire: It seems like the goal is for more inclusivity, right?

BA: It’s possible, I mean, it seems that this one is very well received. You know, so who knows? Maybe they’ll make a high top or maybe they’ll make one with the lens and a button and it spits out film.