The final day of my recent trip to Los Angeles was reserved for a stroll around Venice Beach. A sweaty surfer dude with long, flowing golden locks skated in circles as my nose began tingling with the aromas of the popular strip. The initial notes were provided by the strong incense candles being sold by a Black lady who sat with a microphone in her hand beside an older white man on a skateboard who held up a placard that read simply, “Pot?” As I continued to walk, the smells of sunscreen from beachgoers, perspiration from males working out at Muscle Beach, and urine saturated the air, each vying for its own primetime position (take a wild guess which scent won). City of Stars, Louis Vuitton’s newest addition to their west coast-inspired scents, is the French luxury house’s attempt to capture the vibrant essence of Los Angeles—sans the pungent aroma mix.

If LV’s Spell on You was an olfactory portrayal of a rom-com, City of Stars could be the action counterpart. The opening montage would most likely consist of a high-speed pursuit through the city, with helicopters circling overhead, similar to the scene set on the day of the Louis Vuitton City of Stars presentation launch. In between deafening helicopter sounds, Alex Israel, the man responsible for creating the scent packaging, stood on stage atop the Academy Museum of Motion Pictures with a clear view of the Hollywood sign. “Somebody did something bad or they’re shooting a movie about somebody who did something bad,” he quipped to the crowd. It was a fitting scene from a typical Hollywood action film trope—after all, performance is the foundation of Los Angeles, with everyone contributing to the city’s aura. “I think about fragrance as an accessory to performance,” Israel said. Together, he and Jacques Belletrud—LV’s veteran perfume guru who collaborated with Isreal on Zoom during the pandemic—set out to transform the idea of the realm of performance into an olfactory awakening that takes you on a journey from the first note.

While Israel’s primary focus was melding the performance and creative aspects of LA, Belletrud was on a journey he calls “an eternal quest of freshness.” City of Stars expands Belletrud’s west coast getaway: California Dream captured the enchanting essence of a California sunset; Afternoon Swim delivered a stirring rush of oceanic delights; and On the Beach emerged as the blissful union of the two predecessors, a sea-kissed wonder that conjured vivid memories of a sandy shore. “The range we have are celebrating a lot of different moments—the day, the morning, the afternoon,” Belletrud says. The west coast beaches are exhilarating,, but LA’s night life is where the stars come to life. 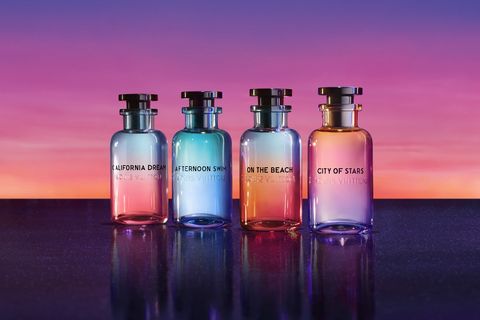 A smell inspired by LA nights may quickly evoke sensual notes common in evening fragrances, such as vanilla, musk, spices, natural woods, patchouli, and so on. Monoi and tiare flower scents abound throughout City of Stars. But, as everyone knows, nightlife in LA isn’t as predictable as one might think, and a night out on the town usually begins with one event and ends with a frenzy of spontaneous activities and chance encounters. City of Stars is a story conveyed through a quintet of citrus notes that invite you to loosen up, an ode to LA’s unpredictability. The major character is unquestionably blood orange, which meets you from the first whiff, a note Belletrud included to express LA’s bravado.

Most of Belletrud’s concoctions are stamped with orange notes. The formula for City of Stars was based around blood orange to capture the vitality of Los Angeles. “Why the blood orange? Because at the same time it’s fruity, slightly sugary, and acid, but has less acid than the current soft orange, and it’s very, very long lasting on skin,” he explains. To hook the smeller, Belletrud squeezed in lemon to “invite you to discover more” and red mandarin to expand the idea of freshness. The wild card arrives as lime, a scent that reminds Belletrud of Coca-Cola. “I don’t drink Coca-Cola anymore, my wife does. I don’t have the recipe, but I know that there is lime in there, so I put this hint of lime in order to create something with sparkle in the front of the fragrance,” he adds.

To add a hearty punch, the Louis Vuitton master perfumer pulled in sandalwood oil for “sophistication and personality” that caresses the skin without being too heavy.

Back in France, Belletrud’s laboratory is surrounded by blooms of all kinds, serving as a major source of inspiration for the floral-tinged perfumes he’s created for LV throughout his tenure. However, since he was producing a scent in Los Angeles, which lacked the floral gardens of his home on the French Riviera, he had to look elsewhere for inspiration. “Sunlight,” Belletrud said when previously Israel asked him what types of scents he smelled during his trips to Los Angeles.

Unlike Belletrud’s bright, romanticized depiction of Los Angeles, Israel’s version of the city begins at night on Muholland Drive, as illustrated on the new fragrance’s package. Tall black palm trees stand against an ombre orange, pink, and purple background. No stars are drawn in the sky, an intentional design by Israel to remind people of who the true stars are.

“The stars are actually down in the city. That was a decision I made to shift your energy and you’re thinking about what stars are, where they could be, or where you might find them,” Israel explains. Lights illuminate the buildings and mountains peppered throughout the paining. “It’s this perfect sunset moment where they’re not in the sky, but they’re all twinkling in the city itself. It’s a city made of stars. Its people are stars.”