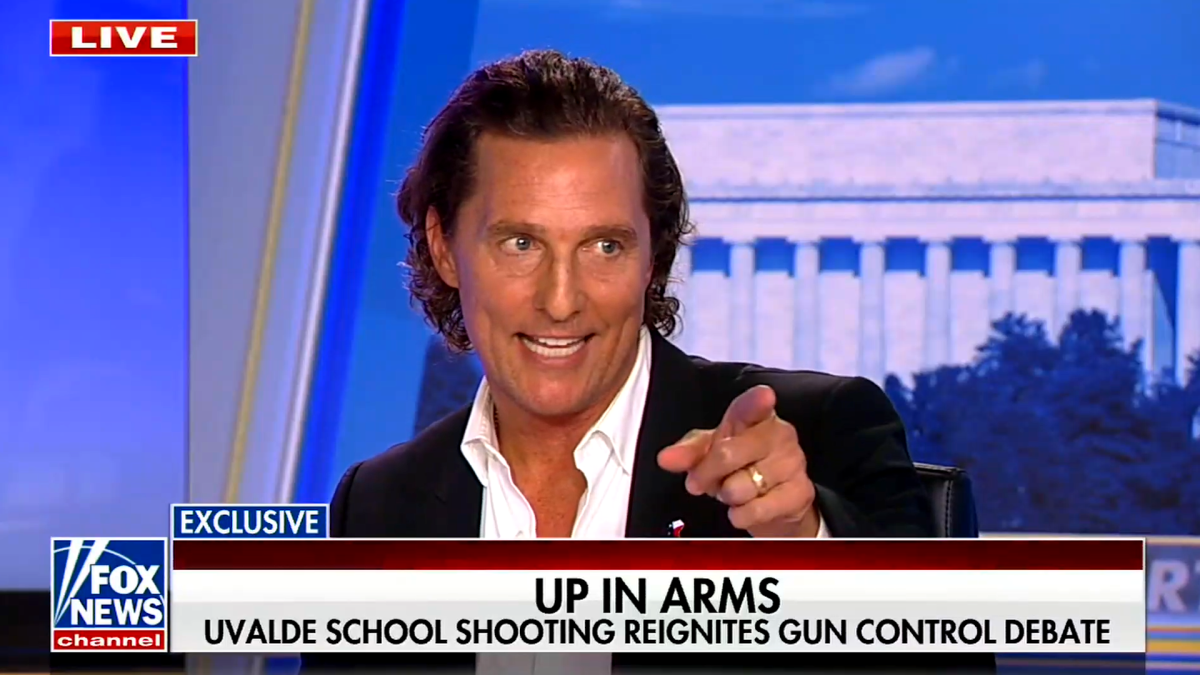 Just hours after his Tuesday appearance at the White House, Matthew McConaughey visited Fox News’ Special Report with Bret Baier to discuss common sense gun control. The actor published an op-ed in the Austin American-Statesman detailing a few simple restrictions that he thinks should be put in place on assault rifle ownership.

“I’m not someone from the entertainment industry that decided to swing by for an open cause,” McConaughey said, at the top of the interview. “This landed on my — I got the calling. It happened in the town I was born in, alright? So it got pretty personal for me.”

One of his major arguments is when it comes to the age limit for an AR-15-style assault rifle, which was legally purchased by an 18-year-old and used to murder 19 children and two teachers in McConaughey’s birthplace of Uvalde, Texas. He believes the age limit for AR-15-style guns should be 21, not the current age of 18.

One of the common arguments people have against changing the age to 21 is that since 18-year-olds are allowed to join the military, that they should also be able to buy assault rifles.

While McConaughey acknowledges the desire for AR-15-style guns, he doesn’t understand why people under 21 need them, or why people need access to them so quickly.

“We’re talking about in a civil society to be able to purchase that kind of weapon, and then that afternoon do what you will with it?” McConaughey rhetorically asked. “We could be more responsible than that, yes, sir, I do.”

While McConaughey didn’t push for a complete ban of the notorious weapon, he does believe common sense gun legislation, which he detailed in the op-ed piece, is something most responsible gun owners he talks to support.

Referring to gun owners, McConaughey said, “I hear so many of them saying, ‘Yeah, pause after purchase, I like that idea. Hey, 18 to 21, for an AR-15 style rifle, yeah.’”

“It’s true that so many of the people that don’t need a gun in their hands are committing crimes of passion,” he added. “And that sometimes a pause, hey, get your mind off it, let your interventions be intercepted by something else, over a period of time could stop quite a few of these kinda crimes.”

Watch as Adam Sandler explains the ‘pathetic’ reason he has a black eye on ‘The Tonight Show’: