Before becoming the self-declared King of Afropop in 2022, Tekno was already a household name across Africa. He has been since his 2016 hit “Pana” blew all the way up. Alongside Drake, Kanye, and Beyoncé, I found Tekno’s songs frequently bumping at barbecues, late night parties, and through my eardrums in the halls at school growing up in Nairobi, Kenya. The Nigerian singer, songwriter, and producer behind worldwide popular tracks like “Buga (Lo Lo Lo)” with Kizz Daniel, “Mufasa,” and “Skeletun”—the last being the song he thinks best describes his sound, as he tells me—was truly everywhere. To many, he still is. Now, however, his reach is beginning to expand beyond his native continent. Tekno, real name Augustine Miles Kelechi, is one of the many incredible artists spearheading the infiltration of Afropop and Afrobeats onto the American music scene.

While previously the genre was tapped into sparingly by American artists—like GoldLink, whose 2019 album had a number of collaborations with African artists, and Drake, whose work with artists like Wizkid and Black Coffee dates back to 2017—2021 was particularly significant for the sound. From Wizkid and Tems’s song “Essence” becoming the song of the summer, to C Kay’s “Love Nwantiti” dominating the Billboard charts and TikTok feed, it was a pretty good time to be an African artist trying to cross the Atlantic. Things haven’t slowed down since. Tems continues to dominate the Billboard charts with “Wait For You,” featuring Drake and Future. Wizkid and Burna Boy were both nominated for Grammys this year while Benin’s Angelique Kidjo and South Africa’s Black Coffee took home a couple of golden gramophones at the annual ceremony. 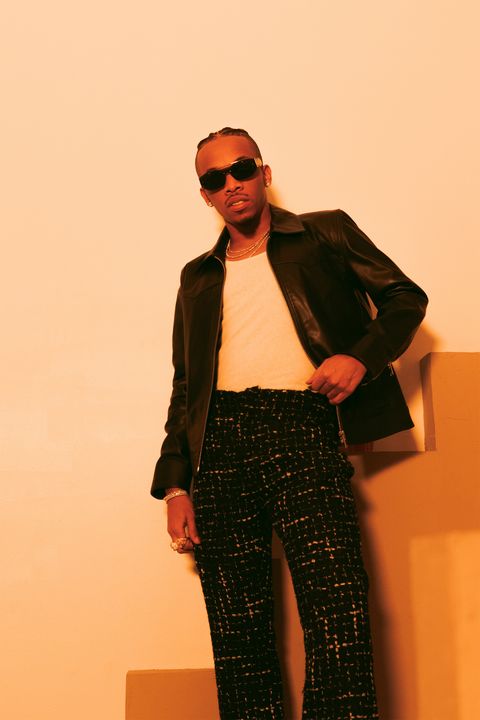 Tekno’s contribution to bringing African music to the United States began before all that. Let me take you back to the year 2019, a faraway time before masks—before the phrase “social distancing” began everyday speak. That year, Tekno was one of several incredibly talented African artists tapped to collaborate on Beyoncé’s album for Lion King: The Gift. He was featured on one of the album’s most popular tracks, “Don’t Jealous Me,” which also included Yemi Alade, Lord Afrixana, and Mr Eazi. That same year, he also wrote and produced “Won’t Be Late,” Swae Lee’s hit featuring Drake.

We caught up with with the 29-year-old superstar to discuss his career, making a comeback after health issues, the future of Afropop here in the United States, and more. This conversation has been edited for clarity and length.

Esquire: You also call yourself the “King of Afropop,” can you give us an explanation to that title?

Tekno: It’s like, I’m the best at what I do. If it comes to African music, I’m the king of this shit. So it’s a self-awarded title.

What does it mean to you now that Afropop is seeing a rise in the U.S.?

Oh, it’s amazing. The goal of every artist is for their sound to be heard and enjoyed and appreciated. There’s a beauty to when you make music on your own—like, this is art, this is beautiful—and then you put it out there and everyone is jumping into it.

I think late last year, we went somewhere and were talking about how it will be hard for Afrobeats to get into the Billboard charts. And I’ve always said it’s gonna happen, it’s just a matter of time. We didn’t know it will happen that quick, but a couple months later, it’s like 1, 2, 3, 4, 5 songs, under the Hot 100. It feels good, because you know, like, “yes, we’re here now finally,” where when you drop, it could literally just take off and the whole world is dancing to it. It’s fucking awesome.

Does it really feel global to you now?

You don’t want to give Nigerians a chance anywhere because you let them come in, they’re gonna swarm you. I think this is just the beginning. For everyone who thinks, “Oh, finally they’ve accepted Afrobeats playing worldwide,” you haven’t even heard nothing yet. I feel like the next couple months or years to come, Billboard is just going to just be filled with African music. 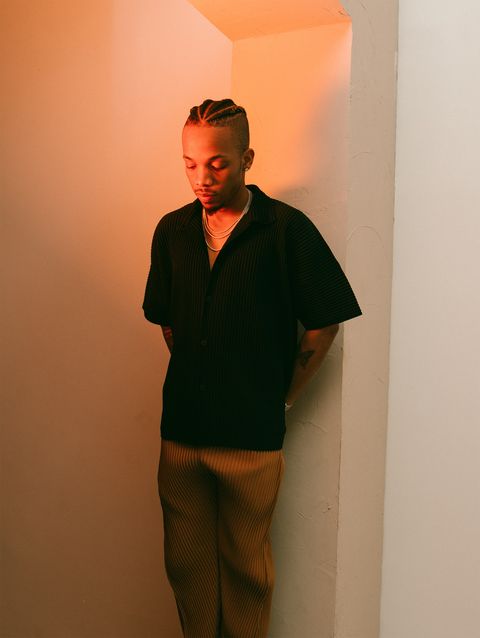 Tekno, the self-described “King of Afropop”

What do you think has been the the reason behind this shift?

I think Corona[virus], because the whole world kind of stopped and everyone just like went on the Internet. It gave room for things that weren’t easily accessed before, music that wasn’t as streamed before. The numbers have gone up. And, I feel like everyone these days will work from home—people always like new ways to comfort themselves, which is like listening to music or watching movies or whatnot. It’s had the help of TikTok as well. You know, if it goes viral on TikTok, it goes viral everywhere else.

Are you taking TikTok into consideration when creating music?

You’d be crazy not to. People are like “Oh, I do for the passion, I don’t care.” That’s crap. Everybody wants their song to be the number one sound and you know TikTok aids. If it helps, why not, you know? It doesn’t mean go be goofy or go crazy, or whatnot. But if you have that sound that is like genuinely fire, just get a dance behind, it’s gone.

How do you think people feel when they listen to Afrobeats?

You’ve had to navigate some recent health troubles. You even took a hiatus. How has that changed you?

Recently I’ve been more mature to learn to take it one day at a time. I don’t overthink anything anymore. What has happened, has happened. As artists we all want to grow and it did happen hat at that point I lost my voice from acid reflux. That threw me off course. But that’s life, you know? Where am I right now? I know who the fuck I am.

This music coming was really easy. For me, I’m inspired by whatever. It could just be traveling, it could be flying, it could be just listening to a particular song from a movie I’ve seen or whatnot. Making music for me is easy, so I don’t feel like it’s directed my music anywhere like to the left or the right, you know, where I feel like I needed to find myself or whatnot. It just kind of slowed me down.

How long did you take a break for?

Nine months. Then I had this drag with Universal for the album that nearly made me not want to see music again. It was a whole terrible time. Just going from losing my voice to coming out dealing with this label. But I’m happy—in the end I found a level ground where everyone is happy. They’re gone. I’m independent, I’m good and it’s easy for me to just do shit the way I want to do it.

I’m sure that brought you to a pretty dark place at times, not being able to sing.

You want to fucking die. You literally just don’t want to live—it’s crazy. That was a crazy time because nothing else makes sense. You can’t sing. You can’t talk. [But], I’m a strong human being. I say, “I have a better understanding of life. It’s one day at a time. Be better than you were yesterday and you’ll be good.”

Have you you know made a full recovery or have there been changes?

I sound way better than I did before I lost my voice. 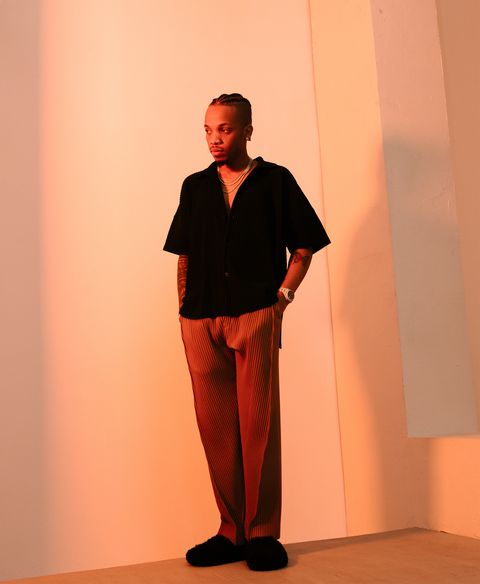 That’s so great. Let’s talk a little bit about your collaborations. You have worked with some pretty prominent artists, like Beyoncé and Drake, what did that mean to you? What do you think that means for Afropop as a genre, especially here in the U.S.?

Tell me a little bit about your new project.

I’m not doing an album. Now I’m just gonna go back home and just cook soup and mash up the thing. I’m not really necessarily a project artist. Like I live on singles. I love the idea of going out there, listening to what’s playing and find what’s missing, fill that gap and draw up something crazy. The team can worry about bringing this and bringing that and put this together and we have our album, but me as an artist, I only care about the next single I’m putting up. Right now, I have something crazy coming.

What can you tell me about what’s coming?

It’s lined up. But like I said, I’ve been out in the States for a little bit. I want to go back home because I feel like it’s better to be back home while you while you dish the food up. It’s just how Afrobeats works. I don’t know if it’s spiritual, I don’t know what it is, but I feel it’s better when you’re home. And I think it’s time to go home.

Ammal Hassan is a writer and Esquire’s Snapchat Editor. She covers all things culture with a focus on music and pop culture. She is from Nairobi, Kenya and lives in New York City.