It’s a quarter after 9 a.m., and already Tinx is being showered with more love and adulation than most people can expect to enjoy in a lifetime.

The 31-year-old influencer sits in a recording booth at SiriusXM’s Hollywood office, wearing a pair of oversized black sunglasses—she’s a little hungover from the night before—fielding questions from women from all over the country. They come to Tinx for advice on all kinds of topics: moving across the country for a boyfriend (“I love when people advocate for their own happiness,” Tinx says), navigating a friend breakup (“They can be just as hard as romantic breakups”), and what to serve for a 4th of July party. (Hot dogs, because they’re “cute” and “a good vehicle for sauce” and watermelon because it adds a splash of color. “Buy it pre-cut and put it in a bowl. No one will know the difference.”)

Whatever their issue, each and every one of them professes her admiration for Tinx.

“Love you!” one young woman exclaims.

“I went through a super shitty breakup last year and all of my friends recommended me to you,” says another.

“My friends gave me similar advice, but I tell them, ‘Tinx didn’t say it yet so it’s not real,’” one caller exudes.

“I’m the oldest, so I don’t have an oldest sister, so I’m literally so excited to talk to you,” the next squeals.

Over the past two years, Tinx has gone from an unknown fashion writer, churning out articles for the likes of Refinery 29 and PopSugar, to a multi-platform lifestyle icon with legions of young female and gay male followers. Her expertise spans from fashion and jewelry, to how to break up with your dirtbag boyfriend, to what songs to play at a party and cute places to eat salads for lunch. She has 1.5 million followers on TikTok, another half a million on Instagram, her own SiriusXM show, a podcast, a fashion line, endorsement deals with Kiehl’s and Pottery Barn, several Spotify playlists with tens of thousands of followers each and one of the most active Instagram DMs in existence.

Her popularity stems from a delicate blend of seeming both aspirational and relatable. To her acolytes, she’s a confidante, the cool cousin they’re excited to chat with at Thanksgiving, the popular yet approachable upperclassman they can solicit life advice from and whom they hope to be once they reach senior year.

Between calls, Tinx pulls out a pink depuffer with disco ball rollers and massages under her eyes. “I had beef bourguignon last night,” she says. “I need to depuff.”

31-year-old Internet personality Tinx has emerged as the digital dating coach of hundreds of thousands of young women.

If there’s one thing straight men can glean from Tinx, it’s to communicate better. Tinx’s advice may span a litany of topics, but there’s a recurring theme to many of the problems presented to her: a woman has been wronged by a man (a “fuck boy,” as Tinx would say), and the woman wants Tinx’s take on how to feel about and respond to the situation.

For instance: Back on the air, a Tinx fan is distraught about being ghosted by a man she had incredible sex with but who is moving to another city soon. “Ghosting is soft dick energy. It’s avoidance,” Tinx reassures her. “All he had to do was communicate he was leaving. It’s really low confidence of him to not take your FaceTime.” The next caller bemoans how her boyfriend backed out on moving into an apartment together, leaving the woman with a costly lease. “That’s so fucking cruel,” Tinx tells her. “The fact that he did that shows me he’s a coward and he doesn’t respect your life. You deserve more than this.”

“Oh my god, Tinx, just knowing you’re mad at him makes me feel so special,” the caller shouts.

Tinx’s advice may span a litany of topics, but there’s a recurring theme to many of the problems presented to her: a woman has been wronged by someone she’s dating.

Her SiriusXM show over, Tinx drives her white Land Rover to a photo studio in Boyle Heights, where she will model the latest drop in her Rich Mom clothing line. This drop is for leisure wear, and Tinx changes out of her white tank top and baggy army green pants and into a gray Rich Mom sweatsuit. (One of Tinx’s recurring Instagram bits is to make videos mocking the habits and fashions of rich moms in various affluent neighborhoods across the country. On Tinx’s “RICH MOM STARTER PACK: southampton edition” video, Gwyneth Paltrow commented “Accurate.”)

Tinx isn’t an expert, nor does she claim to be. She studied English as an undergraduate in Stanford, and aside from some pop psychology she’s picked up from self-improvement books, she has no formal training. Rather, her advice, and much of her appeal, is rooted in lived experience, common sense and a keen emotional awareness. An informal survey of several of my female friends revealed that Tinx’s relatability is among her most attractive features. In fact, Tinx, the one-woman media mogul, is the culmination of Tinx the person’s emotional and spiritual evolution.

Prior to her recent success, Tinx had the kind of wayward, middling career typical of many millennials, bouncing between writing gigs, consulting for tech startups and a stint in grad school. She was anxious about her future as well as the seemingly perfect lives of her peers on Instagram.

“In my 20s, I was pretty miserable,” Tinx says. “I was comparing myself to my friends and they were all getting jobs at Google paying 200k. It’s miserable to see people who are fucking perfect everyday. They have a cute boyfriend and abs and eat pizza and have a big fluffy dog that somehow doesn’t shed everywhere.”

Tinx adopted the mantra “comparison is the thief of joy” and turned her focus inward. She started exercising and eating better, being more diligent about sleep, going to therapy, reading “woo woo books” (her words), attacking her anxiety from every angle. She started sharing her self-care tips to TikTok in May 20220 and quickly cultivated a devoted audience. “I’m not saying I know everything,” Tinx says. “But I found a way to be happy and grateful in life without being attached.” 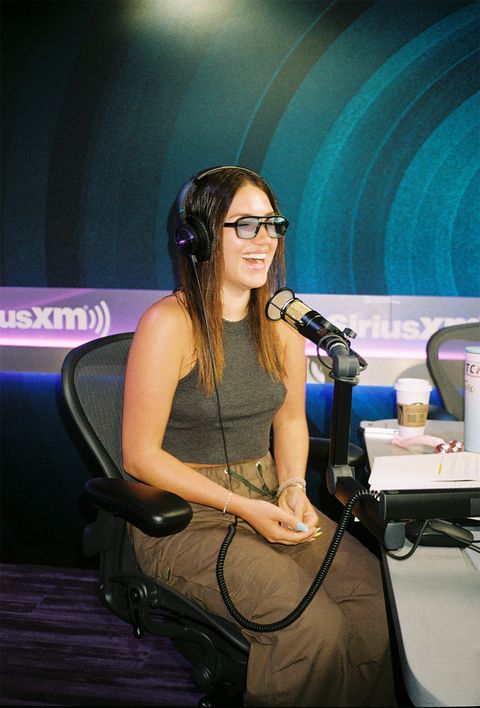 On air on Sirius, where Tinx fields questions from listeners.

Being a social media celebrity in 2022 means having the same sized entourage as a second-tier Kardashian sister. And at the studio, Tinx’s team—a coterie of assistants, managers, stylists and ecommerce executives—buzz around her, electrons around the nucleus of a budding media empire. “I love that—the juxtaposition of the glam look with the casual line,” Tinx tells her makeup artist, discussing her look for the day. Hair and makeup ready, Tinx poses in front of a beige backdrop as pop EDM blares.

Before leaving the photoshoot, Tinx changes into a black contour dress, her third outfit of the day. She’ll have two more costume changes before the night ends—one for the launch party of Selena Gomez’s new beauty line and another for her date afterward. “I know, I’m such a diva,” she says, maybe only half joking.

Growing up, though, Christina Najjar, Tinx’s legal name, was shy and bookish. She attended an affluent all-girls private school—Tinx can instantaneously fall into the impeccable posh British accent she abandoned when she enrolled at Stanford—and her weekends were mostly spent at home reading.

At 12 years old, she developed an alter ego, Tinx, that was unflappable and self-assured. The name comes from All I Wanna Do, the little-known 1998 teen comedy about students at an all-girls school protesting the institution going co-ed. Tinka Parker (Monica Keena), the promiscuous girl of the bunch, says she wants to grow up to be an “actress-folk singer-slut” (the original multi-hyphenate influencer). Over time, Tinx, the assertive stage persona, took over Christina, the apprehensive nerd. “I ultimately became more confident. It was kind of a ‘fake it til you make it’ thing. And Tinx just stuck,” she explains.

It’s a transition that’s paid off. Tinx declined to say what her income is from her various projects, but influencers of her caliber can earn seven figures. Earlier this year, Tinx bought a house in West Hollywood, one of the most sought-after real estate markets in the country, just a few months after enduring a brush with controversy when some of her haters dredged up 10-year-old tweets in which Tinx, among other things, criticized Kim Kardashian as fat. True to her message about honesty and self-growth, Tinx took accountability for the posts and apologized, saying she no longer identifies with the person she was at 21.

Pulling away from the photo studio, Tinx puts on “Take It Easy” by The Eagles, and Don Henley sings that he has seven women on his mind. “This song is about a fuck boy,” I say to Tinx. “Why do you think I like it?” she says. 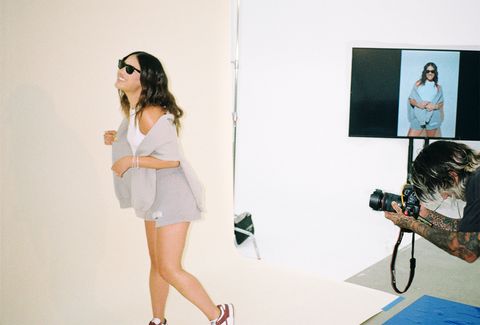 What sort of career is Tinx going for? Oprah and Gwyneth Paltrow.

Lunch is at The Ivy, a perennial favorite among Hollywood players. Tinx makes sure to have a patio table, visible from the street. Tinx denies sitting curbside so she can potentially be seen by any paparazzi or adoring fans. “Oh my god, that would be so cringe,” she says. I ask Tinx whose career she’d like to emulate, and without hesitation, she mentions Oprah and Gwyneth Paltrow, two women whose empires span every conceivable medium and form of commerce. No Internet personality has achieved that level of renown, Tinx says, and she imagines she can be first.

Bret Easton Ellis and Chuck Palahniuk, two of the most uber-masculine writers of the contemporary era, are among Tinx’s favorite authors, so it’s no surprise when she tells me she has a somewhat masculine disposition. “That makes it harder to date,” she adds.

Her audience, however, is almost entirely women and gay men. “We have a lot to learn from men,” Tinx says. “The straightforward way they handle their relationships; they’re not competitive with each other in the same way. A lot of women suffer from a scarcity mindset. A lot of women think, Why does she have what I don’t have?”

At 12 years old, Christina Najjar developed an alter ego, Tinx, that was unflappable and self-assured. It’s paid off.

Tinx shovels ice from her water glass into her glass of rosé with her fork. She orders the crab salad. In a typical week, Tinx spends 10 to 11 hours a day on her phone, but so far this week she’s spent “only” nine. When Tinx was first coming up, one of her M.O.s was to spend at least an hour a day responding to Instagram DM soliciting advice. She doesn’t have time for that anymore—she receives thousands of DMs a day—and instead hosts an hourlong ask-me-anything session via Instagram every Monday and Thursday.

Midway through lunch, two young women, likely in their early-20s, timidly approach Tinx from the street, her curbside seat paying dividends. Tinx, gracious as ever, invites them for a quick chat. The young women ask about Tinx’s photoshoot, which they saw on Tinx’s Instagram just an hour earlier, and ask for selfies together, to which Tinx happily obliges.

“We love you so much,” one says, adoringly, as she backs away.

John McDermott is a writer in Los Angeles and a frequent contributor to Esquire. You can follow him on Twitter at @mcdermott