It’s been an extraordinary year for Moncler—and we’re just getting started. The storied Italian brand, known for its uber-luxurious jackets and puffers, is celebrating 70 years with the “Extraordinary Forever” campaign, honoring its heritage and our planet while keeping a close eye on the future. The 70-day rollout of celebrations kicked off with an epic performance during Milan Fashion Week, shutting down the Piazza del Duomo for a brilliant display of dance, drama, and, of course, Moncler: Its newest jacket made in honor of the anniversary, the Maya 70, was worn by the ensemble of 1,952 people. Moncler then brought a visual exhibition, titled “The Extraordinary Expedition,” to New York, with a stop now in London before heading to Asia later in the month.

Extraordinary comes when you make space for magic.”

The London edition of the exhibit also marks the release of the Maya 70 jackets made by seven guest designers (sensing a theme yet?), including Thom Browne, Hiroshi Fujiwara, Rick Owens, Pierpaolo Piccioli, Francesco Ragazzi, Giambattista Valli, and Pharrell Williams. Each Saturday for seven weeks, starting on Oct. 15, Moncler will drop limited-edition puffers designed by one of the aforementioned talents. The brand also enlisted the expert eye of renowned British portrait photographer Platon, who has photographed everyone from Barack Obama to Adele, to capture each designer’s creative take on the Maya 70, worn by their muses of choice. Francesco Ragazzi of Palm Angels chose model Elsa Hosk, Pierpaolo Piccioli selected supermodel Kristen McMenamy, and Thom Browne tapped actor Lee Pace. 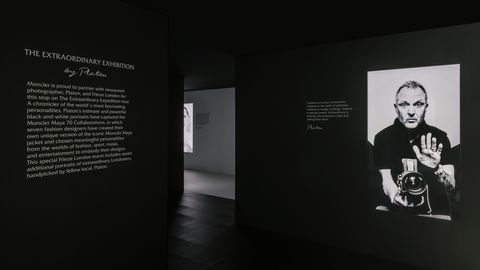 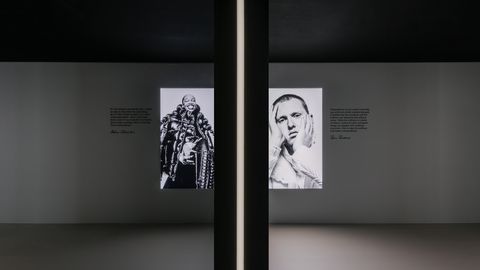 Platon sat down with each muse before taking their portraits, digging deep into their emotions and getting to the heart of who they are before capturing them with both photos and moving images—a first for him. In addition to the seven portraits of the seven muses, Platon captured seven London-based creatives on the cusp of stardom, like Tiffany Calver and Ben Broome, to shed light on emerging talent and pave the way for the next generation. Also, in a rare move, Platon took his own self-portrait. The exhibit will be on view at throughout this week, marking 70 years of extraordinary craft and vision from a brand that knows in order to honor the past, they must push boldly forward.