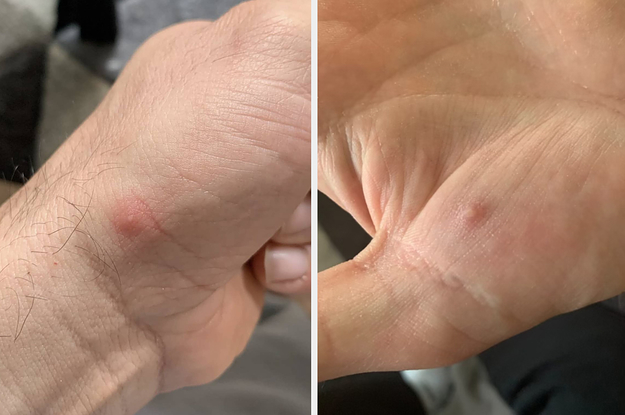 Marco, 40, lives with his partner in Edmonton, Alberta. Marco’s partner had been “feeling off” for a couple days — a low fever, some fatigue, and a few little bumps on his hands, which he didn’t give much thought as they didn’t look serious.

Marco joked with him, suggesting that it might be monkeypox. “I mean, what are the chances? Like 1 in 6 billion?” he told BuzzFeed News.

At that point, there was only one confirmed case of the monkeypox virus in all of Alberta.

The next day, Marco’s partner received a call from a public health nurse letting him know that he had been in close contact with a person who had tested positive for monkeypox. Marco spoke with the nurse as well, telling her that he felt fine, but he did have what seemed to be a canker sore under his tongue, only it wasn’t particularly sensitive.

“I just had tacos with Valentina sauce on them, and it didn’t hurt at all,” he said. (The hot sauce would cause most canker sores to burn.) Assessing their risk and symptoms, the nurse asked both of them to come in for testing right away.

Two days after they went in for testing, Marco and his partner received another call from the public health nurse. “Just got the call we are both positive for monkeypox,” he told BuzzFeed News on Wednesday.

Monkeypox is still relatively rare, but cases are on the rise

A new outbreak of monkeypox is spreading throughout the US, Canada, and Europe, and many of the initial cases have been in queer men. According to the World Health Organization, as of June 8, there are now about 1,200 monkeypox cases worldwide, including 321 in the UK, 100 in Canada, and 39 in the US. Fifteen different states have had cases, including California, New York, and Florida.

There is reason to be concerned, but this is not another COVID. The virus is not as contagious or as easy to spread, and there are already two monkeypox vaccines. One is Jynneos (also known by the brand names Imvamune or Imvanex), and the other is ACAM2000. They can help prevent symptoms even after exposure or infection.

While about 3% to 6% of people with monkeypox can die of the infection, which is more dangerous in children and people who are immunocompromised, the strain of the virus currently spreading appears to be milder, similar to the one endemic to West Africa. A more dangerous strain of monkeypox is endemic to Central Africa.

The cases are happening just as Pride events are underway in many cities. People are traveling and celebrating during a time that for many is the first summer since 2019 when they can finally gather free of COVID restrictions. Mask mandates are no longer in place on public transit or in many cities. Because close contact is one way the virus can spread, health experts are on alert, working quickly to get the word out about STIs to LGBTQ+ communities.

But to be clear — monkeypox is not technically an STI, although some people report having lesions on their genitals or acquiring the virus during sexual contact. The disease can be spread through any kind of close or body contact, which includes cuddling and kissing, sharing towels or sheets, or even respiratory secretions from breathing or talking during prolonged face-to-face contact — so, wearing a mask can help stop the spread of the virus.

Monkeypox is not a new disease. It was first discovered in monkeys used for scientific research (hence the name) in 1958 and first observed in humans in 1970. In places where it is endemic, it naturally circulates in animals such as rodents, occasionally jumping to humans who handle infected animals or are bitten or scratched by them.

Cases are uncommon outside of Africa or among people who have not recently traveled to an endemic area, though there was an outbreak in the Midwestern US in 2003. In that case, 70 people got the virus from pet prairie dogs that were housed with imported rats and dormice.

In general, monkeypox symptoms include fever, headaches, muscle aches, backaches, swollen lymph nodes, chills, and exhaustion. The symptoms usually show up 7 to 14 days after exposure, but they can appear anywhere from 5 to 21 days. About one to three days after symptoms begin, people generally develop rashes and raised lesions, which eventually crust over and form scabs that fall off. Overall, symptoms can persist for up to four weeks.

Marco has found his and his partner’s symptoms to be different from what he has read on the websites of public health agencies.

People infected with monkeypox can have a rash that begins on the face before spreading to other parts of the body, according to the CDC.

Marco noted that neither he nor his partner developed a rash. “The rash is supposed to turn into pustules all over the body,” Marco said. “That didn’t happen to us, either, except for maybe under my tongue.”

Marco asked us to use his first name only to avoid a potential stigma of the diagnosis for him or his partner, but he also wanted to share their experiences to prevent further spread of the virus.

Stigma is built into the LGBTQ+ experience.

HIV/AIDS has been closely associated with queer men since the epidemic’s rise in the 1980s. Some have concerns that monkeypox will follow the same path. This year, UNAIDS, the international HIV/AIDS organization, released a statement about the stigmatizing effects of referencing LGBTQ+ people, as well as African people, in public communications about monkeypox.

In addition to causing social harm, UNAIDS also warned that such associations could result in more problems for public health. The program’s deputy executive director, Dr. Matthew Kavanagh, said in the release, “Stigma hurts everyone. Shared science and social solidarity help everyone.”

Others say concern about stigma is less important when public health is at stake. Historian Jim Downs recently wrote a piece for the Atlantic titled “Gay Men Need a Specific Warning About Monkeypox.” In that piece, Downs writes, “Giving gay men carefully tailored warnings about monkeypox risk can be a form of education, not a form of stigma.”

Peter Staley, one of the original members of the HIV/AIDS activist organization ACT UP, agrees. He said that queer men will always experience stigma, whether it’s through rhetoric surrounding monkeypox or otherwise.

“The right is going to attack us for everything and anything they can. They always have and they always will,” he told BuzzFeed News. “We should never let that dictate how gay men talk to each other about health and risks.”

Staley fully acknowledges that communicating risk about monkeypox carries the possibility that the broader public could associate the virus with queer men, thereby creating a stigma.

“You have to fight two battles at once. We need to get the word out to gay men through targeted messages. And we need to be ready to fight the resulting stigma by delivering messages tailored for the general public.”

Just weeks after the first US case was reported on May 19, targeted messages about monkeypox are already reaching queer men in the country. Such agile communications are possible through existing infrastructures paved through campaigns to reach LGBTQ+ folks for the prevention of HIV/AIDS and other STIs.

Given that June is Pride Month, the CDC acted quickly to dispatch its director of HIV/AIDS Prevention, Dr. Demetre Daskalakis, to engage with organizations and health groups to get the word out about monkeypox. He and his team have plans to speak with multiple Pride organizers this week. Daskalakis said that this summer’s gatherings can be considered more opportunity than risk.

“I believe that Pride is an excellent opportunity to educate people. And when I think about our advice, it’s really about giving people the knowledge that they need to navigate events that can happen all summer, whether they go to Pride or not,” he told BuzzFeed News. “I tend not to think of places as risky environments, because it’s really about mitigating your own risk, to have the right information to be able to navigate what you’re willing to do.”

Daskalakis believes this surge of monkeypox has more parallels to a 2008 outbreak of MRSA, an antibiotic-resistant staph infection, than the HIV/AIDS pandemic that began in the ’80s. The so-called flesh-eating bacteria initially spread among clusters of queer men before leaping to the general population.

“It’s so similar in that it’s spread by really close contact. Sex could be one reason that there is close contact, of course, or other intimacy,” Daskalakis said.

Back then, like now, agencies issued similar warnings through healthcare providers, specifically those focused on HIV/AIDS, who had more queer clients. That was before the advent of smartphones and location-based dating apps. Now, the conversation has expanded.

Grindr, the most popular of these apps, has issued multiple information warnings about monkeypox. The app blasted the inbox of every user in the US, Canada, and most European countries with a message written by a local health agency and a link for more official information from a source in their country.

“We are not a public health authority, but we are excellent connective tissue,” said Patrick Lenihan, Grindr’s vice president of communications. “Our users want this information, and these groups want to distribute it to keep this population safe.”

In the US, Grindr is working with a group called Building Healthy Online Communities, which aims to provide targeted messaging about sexual health by bridging public health professionals and dating apps. The app has connected with the Public Health Agency of Canada to deliver warning messages to its users.

What to do if you think you have monkeypox