Nick Viall knows what you think of him. “When I watched myself in my first season of The Bachelorette, and they played the Jaws music when I approached her,” he says, “I had a feeling people might not come out of it liking me.” Indeed, across two seasons of The Bachelorette—once as a potential suitor for Andi Dorfman, once as a surprise mid-season walk-on for Kaitlin Bristowe—a visit to Bachelor in Paradise, and one stint as the bachelor in The Bachelor, Viall, now forty-two, has inspired extreme reactions in the millions-strong and shockingly-devoted fandom known as Bachelor Nation. If not exactly a villain, Viall, at the very least, came across like the last guy you’d ask for relationship advice.

Well, Nick Viall currently has the No. 1 book in the Dating category on Amazon, so don’t let anyone tell you anything isn’t possible.

Don’t Text Your Ex Happy Birthday is a surprisingly wise and honest book of dating dos and don’ts from a guy who has taken some lumps, brought some lumps on himself, and done a good deal of both of those things in your living room. The book is the product of sturdy Midwestern work ethic, a couple of lucky breaks, and a hard-won talent for giving blunt advice. As with his podcast, The Viall Files, one approaches with skepticism. Look at this handsome guy with the cool tattoos, one says, what does he know about pain? And then he delivers some very sensible tough love (as in the essay “Stop Texting Your Ex Happy Birthday,” which you can read here), and you say: “Okay. Fair point.”

For Viall, it comes down to being just blunt enough. “I haven’t always been super-empathetic with advice, but sometimes people need that.” He’s been one of the people who needs that. After his first devastating heartbreak in his mid-twenties, Nick pretty much went catatonic: “I was a zombie,” he says. “I was calling my mother every morning for months. And as much as she hated seeing me sad, she definitely loved that I called her every morning.” Viall’s father stepped in with some tough love. “He said, ‘Nick, you have to get over it,’ and although I was like ‘you might as well tell me to levitate,’ he was right. My mom was listening to me, but she was keeping me stuck. Dad woke me up. So that helped, and it also taught me that balance of directness and empathy. If I’m blunt, it’s because I understand what it is to be stuck and to need someone to shake me out of it.” 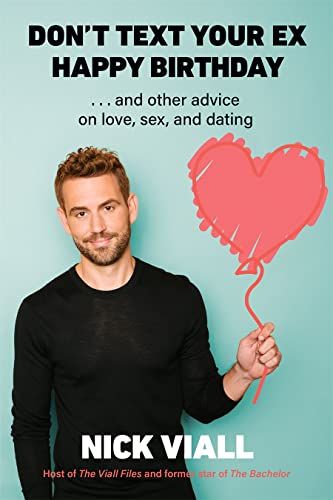 Viall grew up the second-oldest of eleven kids to a (you guessed it) Catholic family in the Midwest. (His youngest sibling is seventeen; “I’m six months closer in age to my dad than to her,” he says.) After a few years working at Salesforce, and the aforementioned bad breakup, a friend signed him up for a Bachelor audition. He was the runner-up in his first season, then—based on the chemistry he felt with the next Bachelorette—he invited himself back for the next season, where he was the runner-up again. And although his old job was waiting for him, he knew he was ready for the kind of new adventure instant TV fame can afford a person. “I remember feeling like I don’t know what value I’m adding, like anyone could be doing what I’m doing.” So after a season as The Bachelor, and the broken engagement that came with it, he stayed in Los Angeles.

Viall’s podcast The Viall Files began as a Bachelor recap show, but over time, as requests for relationship advice began to fill up his DMs, he started doing a second show a week devoted strictly to answering them. And then a third. And then the guy who didn’t find love on television over and over again became the go-to love guru of the moment, with around 6 million downloads a month. The show is clicking, and I know that for sure, because as we talk over beers at a neighborhood gastropub, at least three of those six million people stop by our table to tell him how much they love it.

“On the show, you’re feeling excitement and lust and chemistry, but real love is trust and security and the feeling that your partner knows who you are, which is all impossible to have on The Bachelor.”

Over beers at a neighborhood gastropub in Studio City, California, Viall tells me the most shocking thing I can imagine hearing about life in the Bachelor Mansion: the feelings the hopefuls explore and explain and explode over on camera…are actually real. “Oh yeah, it’s all genuine,” he says. Whether it’s the hyper-focus on one person, the competitive element, or an unholy mix of sleep deprivation, Stockholm syndrome, and an open bar, those tears and fights are apparently not put on for the camera. “It was real for me,” he says. “I felt real pain and real rejection. But a thing I learned is that feeling in love and being in love are not the same thing. On the show, you’re feeling excitement and lust and chemistry, but real love is trust and security and the feeling that your partner knows who you are, which is all impossible to have on The Bachelor. Real love isn’t possible in that environment, but real feelings are. Sometimes they turn into love, and sometimes they just get confused with love because of the general excitement level. But in the moment, it’s real.” This is a scenario I have to admit I never considered.

With that in mind, it’s easier to understand the wisdom that lurks beneath the laconic delivery on The Viall Files. Meanwhile, Don’t Text Your Ex is a He’s Just Not That Into You for the social media age, with essays like “No, You Can’t Be Friends With Your Ex,” and “Just Remember Everyone Is Annoying,” and quick, direct Q&As like “Q: Ex dumped me because he says he can’t be attracted to a woman he respects – lie? A: I’m almost impressed with this bullshit. You don’t want this project, your ego does.” It’s a fun read, even when you’re seeing yourself in some of the fuckboy nonsense he describes. 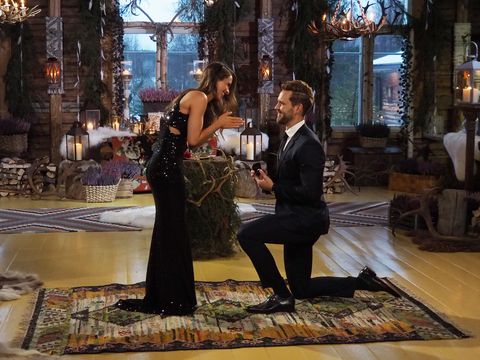 Nick Viall in a scene from The Bachelor in 2014. “Real love isn’t possible in that environment,” he said of The Bachelor, “but real feelings are. Sometimes they turn into love, and sometimes they just get confused with love because of the general excitement level. But in the moment, it’s real.”

Viall also knows you might not think about him at all; Both the Bachelor franchise and the relationship-advice-podcast space skew pretty heavily female. “A lot of guys internalize this message of don’t be a pussy, and because of that they’re afraid to talk about their insecurities,” he says. “And now the world is changing, and expectations of men are changing, and I can see a lot of guys wanting to do well but still being a little closed-off and defensive.” If only Adam Levine and the Try Guy Who Tried Cheating had read the book: “We all have low-character moments, but I don’t think I have any sympathy for those guys.”

He’s has accomplished the thing few have been able to manage in a post-reality-fame existence: he’s taken his strengths and turned them into a solid brand (and an essential oils company, Natural Habits Essential Oils; it’s good to diversify). After a few public breakups, he’s in a solid relationship with model and medical rep Natalie Joy (they met in the DMs; he’s mum on who slid into whose). And last Christmas, he had a long talk with his father: “I knew the mental health toll and the quality of life that his job afforded him, so I got him alone, and I said ‘Can I ask you how much money you’re making?’ And he told me, and I said, ‘Quit. I’ll pay you your salary, and you can do things for me once in a while.’” Viall smiles. “So that’s, like, been huge for me.”

Dave Holmes is Esquire’s L.A.-based editor-at-large. His first book, “Party of One,” is out now.