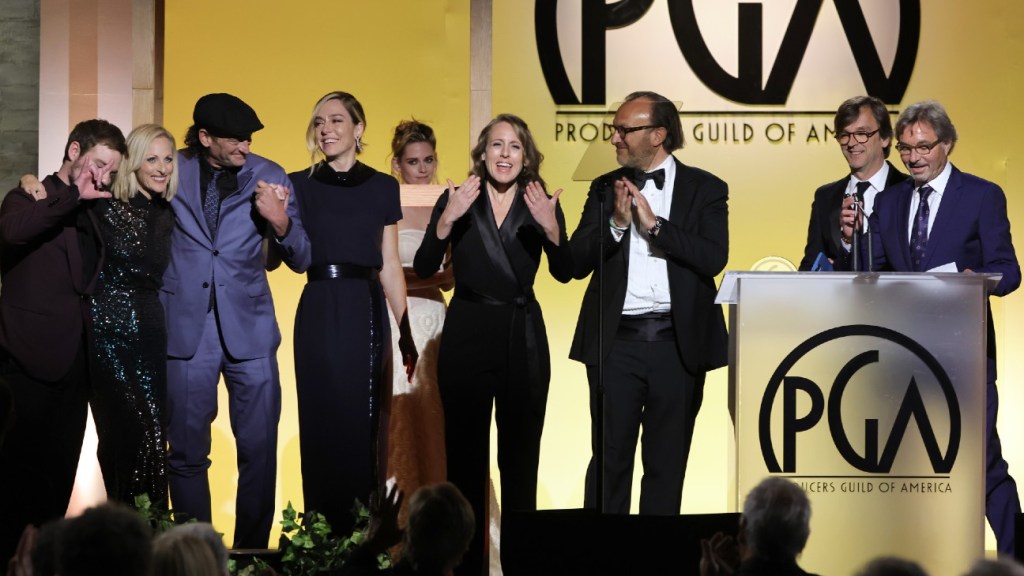 CODA, Succession and Ted Lasso prevailed at the 2022 Producers Guild Awards on Saturday.

Taking the top prize, CODA won the Darryl F. Zanuck Award for outstanding producer of theatrical motion pictures over fellow nominees Being the Ricardos, Belfast, Don’t Look Up, Dune, King Richard, Licorice Pizza, The Power of the Dog, Tick, Tick … Boom! and West Side Story. The ceremony was held at the Fairmont Century Plaza Hotel in Los Angeles.

The night’s other winners included Ted Lasso and Succession for episodic TV, comedy and drama, respectively; Summer of Soul, Encanto, Mare of Easttown and The Beatles: Get Back also took home PGA Awards.

CODA‘s win bolsters its chances ahead of next weekend’s Oscars. While The Power of the Dog has earned the top prize at the BAFTA Awards and the DGA Awards, CODA‘s PGA Award victory is a nice complement to its SAG Award win for best ensemble. With one week to go before the Academy Awards, it appears it will be a best picture showdown between these two front-runners.

In the film’s acceptance speech — where the production team was joined on stage by director Sian Heder and stars Marlee Matlin, Troy Kotsur and Daniel Durant —  producer Philippe Rousselet told the crowd, “I think we will all agree that a good movie always starts with a good story. As a producer I’ve always been drawn to stories that are filled with humanity, and in a world where we see the lack of it every day, I’ll take this award as a sign that there’s still hope.”

Added producer Fabrice Gianfermi, “This movie has been an amazing ride. It was such a special one to make. There was so much love and so much heart put into it. The fact that people love our movie is just the greatest gift of all.”

The guild handed out a number of special honors, with Ryan Murphy presenting Greg Berlanti with the Norman Lear Award as the latter spoke about his pledge for LGBTQ representation. Berlanti remembered being “a deeply closeted gay kid, and the kind of vitriol we’re seeing now so openly by members of the Florida Legislature or by the governor of Texas about trans kids or gender non-conforming young people and their families. There was that kind of homophobia overt and casual and almost every corner of every room.” He also paid tribute to Lear’s work and joked, “I have a lot to thank Norman for, and not just because I’m pretty sure the first drag performance I did as a kid was Edith Bunker.”

Steven Spielberg honored Kathleen Kennedy and George Lucas with the Milestone Award, noting that the “two titans are still just like kids playing in a sandbox” in the pursuit of “creating new stories. New stories that have enriched the art form, driven our culture forward and inspired new generations to tell their own stories. They are and always will be the force to be reckoned with.”

In discussing his role, Lucas said, “To me, that’s the first and foremost job of a producer, which is to do the impossible. And you do it every single day. And then every single day, something comes along to destroy everything you’ve done. And you have to pick it all up at lunch, and figure out a new way to finish the movie, in conjunction with the director, and it’s daunting to say the least.” During her speech, Kennedy added, “There’s no one that I would rather share this moment with more than my friend, my mentor and the greatest master Jedi of them all: George.”

Issa Rae was presented the Visionary Award by HBO and HBO Max chief content officer Casey Bloys, who upon accepting, joked that the PGA still sees her as a visionary after her Insecure follow-up, Rap Sh*t, as she asked, “Why doesn’t it get easier?” Nevertheless, she continued, “I constantly remind myself why I do this and why I love to do this, and I know that I’m going to continue to make mistakes and learn from this. And I’m not going to stop painting anytime soon. I’ll still be out here using all different types of brushes and brilliant colors, and those colors come in the form of my many amazing collaborators past and present.”

Denis Villeneuve made an appearance to present Dune producer Mary Parent with the David O. Selznick Award, who teased, “We need to support and usher in new messages and stories which resonate and, of course, we’ll all be remaking 20 years from now.” Jessica Chastain also took the stage to present Rita Moreno with the Stanley Kramer Award, telling the star that for much of Moreno’s career, “I may or may not have been obsessed with you, Rita, and your accomplishments. Rita does what Rita feels. I think it was about a decade ago you reminded me the first time we met, you yelled across a crowded restaurant at me, ‘I love your breasts.’ That’s a true story, everybody. So Rita, I love your breasts, too.”

Moreno wound down the night with an impassioned speech of her own, recalling attending Martin Luther King Jr.’s “I Have a Dream” moment and the activist role she’s taken in her career, while also acknowledging the work of Kramer.

“It is so meaningful to me and so gratifying to receive this extraordinary recognition and to be associated with his legacy. I am 90 now, and working for a lifetime in this business has taken tenacity and hard work advocating for issues of social justice for the last 60 years,” she said. “It’s been exhausting, exhilarating and life-giving. Had it not been for those sets and that fire set inside me as a young woman, I certainly would not be here tonight receiving this wondrous honor.”

The PGA Awards, originally set to take place Feb. 26, is one of a number of events that were moved from their original date earlier this year due to a surge in COVID-19 cases caused by the omicron variant.

Earlier this week, the PGA announced the winners for its Innovation Award and for best sports, children’s and short-form programs. The Innovation Award went to For All Mankind: Time Capsule, while 100 Foot Wave took best sports program, Muppets Haunted Mansion won the children’s award and Carpool Karaoke: The Series was named best short form.

Encanto (WINNER)
Luca
The Mitchells vs. The Machines
Raya and the Last Dragon
Sing 2

Award for Outstanding Producer of Televised or Streamed Motion Pictures

Summer Of Soul (…Or, When the Revolution Could Not Be Televised) (WINNER)
Ascension
The First Wave
Flee
In The Same Breath
The Rescue
Simple As Water
Writing With Fire

This story was originally published on March 19 at 7:30 p.m.