In case you weren’t already aware, Prince Harry’s real name is not, in fact, Harry. It’s Henry. Or more specifically, “Henry Charles Albert David,” a truly endless string of first names, none of which are Harry. So…why do people call him that? He has no idea.

Harry joked about his name during a chat with winners of the WellChild Awards, while talking to a child named Henry. “My name is Henry as well,” Harry said, via Entertainment Tonight. “But everyone calls me Harry. I have no idea why.” (Side note: Henry also asked Harry about his kids Archie and Lilibet, and he responded “To answer your question, Henry, Archie is very very busy. And Lili is learning to use her voice, which is great.”)

But back to his name. While he’s gone by Harry his entire life, the royals actually do call him “Henry” in formal situations. For example, when Prince Harry’s engagement to Meghan Markle was announced, the Palace’s statement read “His Royal Highness Prince Henry of Wales and Ms. Meghan Markle Are Engaged to Be Married.”

And interestingly, there’s a bit of royal precedent for Prince Harry going by Harry instead of Henry. Turns out Harry is the diminutive form of Henry, and was popular in medieval England. According to Metro, monarchs named Henry (including the infamous Henry VIII) were typically called Harry by friends.

Another fun Prince Harry fact? He doesn’t have a last name. The official name listed on his son Archie’s birth certificate is “His Royal Highness Henry Charles Albert David Duke of Sussex.” 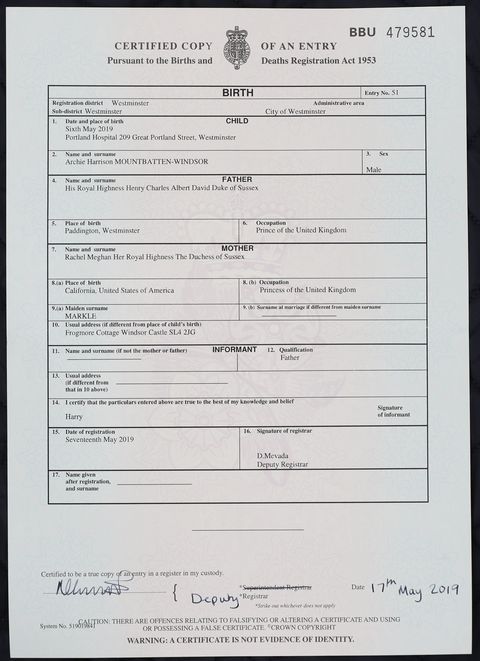 However, Harry has several names he can use when needed. When he served in the military, he was known as Captain Harry Wales, according to The Telegraph. But “Mountbatten-Windsor” is also available to him if he needs it thanks to the Queen declaring that when members of the royal family need a last name, that should be their go-to.