Midway through director Nelson George’s new HBO documentary, Say Hey, Willie Mays, the film explores Mays’s relationship with Jackie Robinson. “Willie’s personable and has great talent, but he has never matured,” says the righteous Robinson. This was understandable, but slightly unfair from Robinson–and sad, that two of the greatest Black athletes of the 20th century were at a public impasse. Robinson was the trailblazer who overcame virulent racist violence on the field, while maintaining his composure off of it. Mays was the affable superstar that after a few years of struggles, got white people to bergrudingly respect his talent.

Most documentaries would handle this topic in either glibly or with a heavy hand, but Nelson George is experienced in handling Black issues with nuance. On Say Hey, Willie Mays!, which is now streaming on HBO Max, Willie’s story becomes open for interpretation. “Different people are allowed to do things in different ways,” Mays says. “Everyone must do his job in his own way. My way was just as important as Jackie’s way.”

Throughout his life, Mays was the superstar who entered baseball folklore with his iconic World Series basket catch. George, a former Billboard editor and Village Voice writer, gives us insight into who Willie was in his private life. We learn about his relationship with Harlem gangsters and street players, as well as the racist attack at his home in San Francisco while his son was sleeping. Barry Bonds, who is featured heavily in the documentary, discusses how strong and familial his relationship with Mays is. (Willie is his godfather–Bonds’s father, Bobby, played with Mays.) And the 91-year-old Mays is game for the task of explaining his career, his time in the Negro leagues, upward mobility in American life, and his extraordinary abilities. His age shows, but he is firm. With a sly humor, Mays hands out wisdom like Pez candies.

To see Willie Mays is to see all of his multitudes at the same time. George, who first broke into film when he helped finance Spike Lee’s debut She’s Gotta Have It, argues that Mays may not have been publicly outspoken, but he is part of a Black ballplayer lineage. If Barry Bonds is the brilliant prodigy of the ’90s and the ’00s, then he learned the intimacies of the game from Mays. If Robinson was a public Black leader, then Willie privately mentored players like Dusty Baker, another baseball lifer. The appeal of the documentary isn’t just that it discusses Willie’s gifts, but rather, it shows why people revere Willie. To Say Hey, that matters too. Esquire spoke with George over the phone to discuss Mays, Robinson, Barry Bonds, and much more.

ESQUIRE: I come from a Yankees family. My dad was born in the Bronx, but he had a relationship with Willie. It’s interesting—we had Jackie, who was an excellent player, but he was the first one to do it. Whereas Willie was the best player in the entire league.

Nelson George: Yeah. Jackie was the breakthrough. He was a superstar. Jackie got into the Major Leagues at 28. Willie comes in as a kid. He’s amazingly good in ’51. He’s barely 20. And so he grew up in public. Because they played in New York, during the time when New York was basically the center of baseball with the Yankees, the Dodgers and the Giants. There was so much immediate attention he was able to get. Part of the reason that the catch was so impressive in ’54 is that it was on TV. So he benefited from being in New York when it was a media sector of the country… Willie’s career also connects from the Negro Leagues to the Major Leagues—and the introduction of baseball as a national TV sport. He was there for all of that. So he’s intertwined with the history of baseball in all of its very crucial ways.

It was cool that you showed the lineage in terms of Black players to the Latino players, and the film discusses what Willie’s relationship with them was. I remember Clemente had issues with the media in Pittsburgh because of the language barrier.

It was a real thing. Their transition was not a smooth one. They had to adapt to being in America. Baseball was huge for Black people at the time, and so Willie helped them. Willie is not a public speaker—he is a ballplayer. And the kinship was strong.

Barry Bonds and Mays reminded me of one another.

I think Barry was the last interview we got. We met him as you see the footage of him at Willie’s 90th birthday. We spoke to him about doing [the documentary]. But you know, it took him or maybe a year or two to agree. He has this history. He feels attacked often by the media. When he sat down it was all love. It was one of the most emotional, loving stories and interviews I’ve ever done. And the relationship between Bobby Bonds and Barry Bonds is an epic story of kinship and brotherly love. 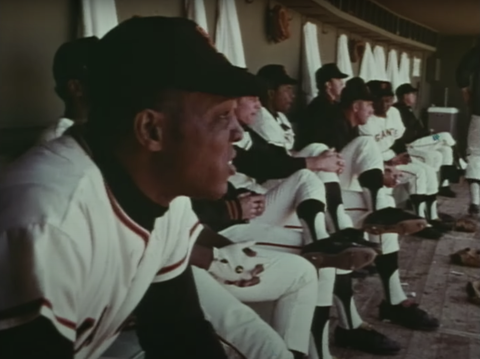 “You know, there were definitely some people in the media who definitely were down on him as a young Black guy coming to be a star,” says Nelson George of Willie Mays’s time in san francisco.

Is there any way to fix how hard it is for Black kids to play baseball at an early age?

Jerry Manuel, who was a manager for the White Sox and the Mets at one point, has started an academy. I think it’s worth it. He said he’s doing a baseball academy, I believe out of the West Coast or maybe Florida, which is also like a formal high school. I think that’s what it’s gonna have to be. I don’t know if baseball will ever will be a force again in the Black community. Baseball definitely misses the star Black player. The Latin guys are doing it well, but without the Black athletes’ innovation. The game misses something; we go back and look at the era that Willie was in. I grew up watching Bob Gibson. Gibson was a bad man. I remember watching Bob in the ’67 World Series. I’ve never seen a Black guy throw a ball at white people.

One of the more compelling narratives about Willie was that he had to compete with DiMaggio—who was from the Bay—for Giants’ fans hearts. Is he still affected by it?

I mean, he won that battle. At that point, San Francisco had never had a Black athlete that was a star. I mean, Bill Russell grew up there, went to high school there, and also actually played ball at Erie, San Francisco. But basketball was not baseball, right? It wasn’t that same level, at that time. So Willie comes into town. He’s the first Black superstar in the Bay Area. And San Francisco wasn’t the San Francisco that we think of now. It still was very white ethnic. It’s very Italian. So DiMaggio is a hometown dude—he played in the same ballpark and the same position. It took a minute.

I always think of Willie, in the same way, I think about Sidney Poitier and Sammy Davis. These guys were crossover stars, before the phrase even existed.

If you go back and look at the newspaper coverage of him from that time, there was a paper that just went after Willie the whole time. You know, there were definitely some people in the media who definitely were down on him as a young Black guy coming to be a star. And then you have the incident where he was denied the house initially. Some people thought he was causing trouble. Some guys got into the door with a different mentality after Jackie. We’re not gonna push it and be outspoken. Those guys got criticized for it. I always think of Willie, in the same way, I think about Sidney Poitier and Sammy Davis. These guys were crossover stars, before the phrase even existed. They are kind of non-violent. We shall overcome. When the nationalist thing comes in, all those guys got criticized. That’s why I was so happy to have Harry Edwards in the show. He was part of that nationalism. And it’s interesting because Harry’s view really is very nuanced. He still disagrees with Willie’s stance on not being outspoken. At the same time, he goes, “Well, he was the greatest ball player of all time, and he was so visible to the world, that maybe it was all right.” It’s probably something Harry wouldn’t have said back in the day.

He idolized Jackie, but in my view, he was also intimidated by Jackie. Jackie came into the majors at a later age, 28, and he was already very articulate. Willie was coming out of an Alabama high school. Then, Jackie kind of starts criticizing Willie. Willie didn’t say a word until the one comment in Spring Training in ‘68. Also, Jackie’s comment was not only about Willie, but other players on the Giants, like Jim Ray Hart.

I find that I empathize with Jackie and Willie both. It reminds me of the recent thing with Kareem and LeBron. The fighter can’t stop fighting—and the athlete they fought for was criticized by them.

The word they kept bringing up is joy. Jackie was a very serious man. He didn’t have the laughter and joy and the kind of spontaneity that Willie had. He might have questions about it. Whereas what I found from Willie, and it’s interesting as he got older, that boyishness went away. And in many ways, he became much more guarded.

Jayson Buford is a New York-based writer and diehard Knicks fan. He needs another Yankees fitted.