I swear to god. If I see you bozos causing Grand Theft Auto 6 to trend on Twitter for another 12 straight years, I’ll lose it. It’s time to face the facts. The rumors aren’t true. Look at me. In the eyes. GTA 6 is never coming. We’ll get GTA 5: Redux Funky Edition before GTA 6 even touches the surface. Am I being hyperbolic?! I don’t know anymore. All I know that we’ve all been hankering for more mayhem and virtual criminality.

Well, I’ve got good news for you. It’s coming next month. This isn’t some rabbit hole, GTA 6 rumor mill, garbage clickbait, either. No. You have more chaos, more customization, and more fun coming with the reboot of the whimsical Saints Row, which releases on coming out on August 23rd. While this isn’t a full review, I did get to sit down with some wonderful people and clock in four hours of unadulterated play time. This wasn’t one of those guided, we’ll-only-show-you-the-cool-parts-play-tests, by the way. I was cut loose into the colorful, full, and downright exhilarating Santo Ileso to steal, kill, or just spend most of it playing fashion shows, if I so chose.

Let’s get one thing straight: Saints Row is fantastic. It’s been some time since I played a game (Elden Ring, to be exact) where if given the choice, I would have lost myself in an all-nighter playing it. Saints Row takes place in the sprawling Santo Illeso, which has the right mix of cities, desert, suburbs, and anything else you can think of, really. The story centers around a group of roommates, all involved in some competing level of Santo Illeso crime. The player’s customizable character is a mercenary for hire, who, with their roommates, commit crimes for an extremely relatable reason: they have to pay the bills. Saints Row is lively, hilarious, and vibrant. It’s a whimsical turn that feels closer to the Vice City era, than any recent GTA venture. Saints Row is electric right off the bat, with strong voice acting, humor, and a killer soundtrack. A generally relatable criminal enterprise is the cherry on top.

Saints Row refines many GTA V quirks that always bothered me. Everything is faster and smoother. While GTA V can feel heavy whenever you move, Saints Row is fast, precise, and sports one of the smoothest dodge rolls I’ve felt in a shooter. The guns feel heavy, similar to a Ratchet and Clank game. Meaning? You get the sense that you’re really doing some damage. There’s a slew of silly and cool finishers to spice things up, in addition to fast-paced combat. Everything else gets polished and primed—particularly the driving. Cars feel amazing to whip around. When you steal a vehicle, you simply hit a button and jump through the window. (GTA fans: I hear your sigh of relief. If you know, you know.) Saints Row has co-op multiplayer, too, plus a “few surprises” in store. While I didn’t try the multiplayer, it reportedly allows you to do anything you’d like in your main game with friends.

Let’s talk about what makes Saints Row truly unique: customization. Everything—and I mean everything—is heavily customizable. You can make any character you’d like, with one of the deepest creators I’ve seen, including accessibility features like prothstetics into account. It’s a wonderful touch. Every gun can be mixed and matched with several colors, glossy and metallic sliders, decals, patterns and more. And the cars. The cars! Same deal. You can do whatever the hell you want. I could’ve spent my entire play time on just customizing everything. Coupled with beautiful art direction, I’m excited to see what nonsense I can unlock in Saints Row‘s late game. 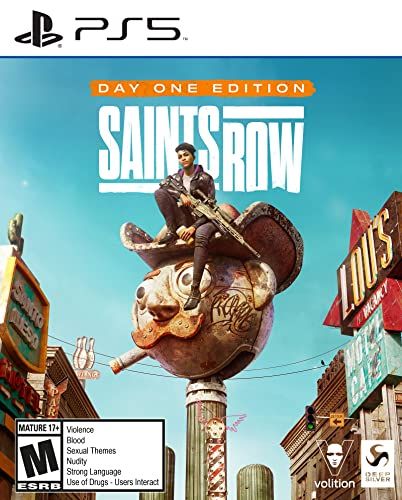 My time with Saints Row revealed a welcome, refreshing take on a genre that’s been monopolized for three generations. While my play-through was nearly bug free, other journalists I spoke to reported some nasty bugs. Now, that’s a given at this point in development, but I’d be remiss not to mention any hitches. Still, Saints Row looks great and feels even better. Consider Sin City titles spiced up once again.

Cameron Sherrill is a designer and writer for Esquire.com, where he covers technology and video games.