Max Kakacek, one half of the indie rock duo Whitney, is in the middle of telling me about how his parents recently paid off their 30-year mortgage when his bandmate, Julien Ehrlich, interrupts him. “Oh damn, I didn’t know that,” Ehrlich says. He sounds as though he thinks he should’ve.

The three of us are at Jajaja, a sleek, festive Mexican restaurant located at the exact corner where the Lower East Side’s pricey dive bars give way to Chinatown’s never-ending variety of cluttered, discount stores. We’re here to discuss Whitney’s new album Spark, out now, but we took a detour sometime after the enchiladas arrived and are now talking about Max’s childhood home, the one his parents just finished paying off.

As Kakacek continues to brief us on his parent’s house, I notice how intently Ehrlich is listening to him and think back to his initial reaction. It strikes me as strangely intimate. Who among us knows when our best friend’s parents paid off their mortgage, let alone feels disappointed in oneself for missing the occasion? It’s a mortgage payment, not a birthday. But for Julien Ehrlich and Max Kakacek, best friends and bandmates who have lived together on-and-off for more than a decade, missing any milestone, no matter how minute, probably feels kinda weird. You see, these two men haven’t spent much time apart, especially in the past few years.

Julien Ehrlich and Max Kakacek. The duo performs as Whitney.

In the fall of 2019, Ehrlich decamped to Portland, Oregon after his long-term relationship ended. “I just wanted to give her space,” Ehrlich says, “and to avoid a situation where we were dating people in front of each other in the same city.” Kakacek followed suit a few months later. His reasoning for following is simple. “We’ve always lived together, and that’s just the way that we work,” Kakacek says, matter-of-factly. “It’s the way the business operates.” Before I have time to feel stupid for asking a grown man why he flew half-way across the country to shack up with another grown man, Kakacek admits there was another reason: He was also going through a break-up.

The idea was for the two of them to hang out in Portland, lick their wounds, record some songs, and eventually head back out on tour. But the pandemic threw a wrench in their plans, and Ehrlich and Kakacek ended up stuck together in a small rented house for months on end, with nothing to do other than feel their feelings, and no one to talk to besides one another. The intimate experience of seeing each other at their most vulnerable powered the duo to make Spark— a shiny pop album that glints with details about late twenties’ turbulence and follows Ehrlich and Kakacek as they search for happiness on the other side of heartbreak. 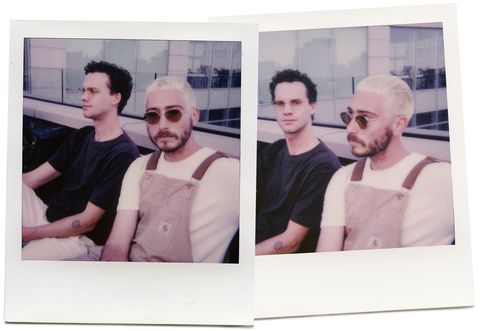 Kakacek and Ehrlich on a Manhattan rooftop.

Spark sounds nothing like Whitney’s previous two albums, 2019’s Forever Turned Around and their critically-acclaimed 2016 debut, Light Upon the Lake (of which Elton John is a big admirer). Those albums drew inspiration from folk-soul acts like Buffalo Springfield and evoked a breeziness that made them great to play at a summer barbecue. Spark’s vibe is more “I just got dumped at the club.” It doesn’t sound anything like the ramshackle rock music the two released as part of the defunct group, The Smith Westerns, nor the simple, earnest guitar music that Girls’ JR White, a beloved mentor who passed away in October 2020, taught them how to write. Indeed, Whitney put the past behind them on Spark, and that’s exactly what it sounds like.

A striking contrast between sound and lyrics courses through the LP. Consider, for instance, the lead single, “Real Love.” In his signature, warbling falsetto, Erlich ruminates on a rocky relationship. “I can’t control how I’m feeling / When our bad days keep repeating / and I can not escape.” The lyrics detail a shitty experience, but the Wurlitzer-spiked melody accompanying them is bouncy, damn near buoyant. The same effect occurs on “Memory.” Listen only to the words, and it’s a desperate plea for a fresh start; mute them and it becomes a zingy ode to new beginnings; a celebration—not a prayer—for a changing of the seasons. 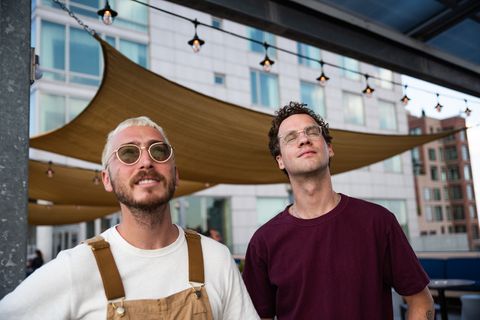 Ehrlich and Kakacek goofing off.

The contrasting elements are a “pretty accurate peek into our minds,” Ehrlich says, noting how difficult it is to write a song that’s unabashedly positive and upbeat, a la Pharrell’s “Happy.” “They stress me out,” Kakacek adds. Both men say their mental states ebb and flow but neither have gotten fully lost in depression. They know music can be a powerful, emotional tool, so they try to write songs that urge people in a positive direction. “Why not, while we’re alive, make things that people can use?” Ehrlich explains. In the case of Spark, that mission often resulted in a surprising deployment of techniques lifted straight out of Max Martin’s Guide to Pop Music.

Behold the sunny, synth-laden “Lost Control,” which is underpinned by a simple, syncopated beat that recalls Justin Timberlake’s “Sexyback” era, but, thematically, has more in common with other “crying on the dance floor” bangers like Lorde’s “Green Light,” the 1975’s “Somebody Else,” and Robyn’s entire body of work. “Lost Control” sounds exactly like you think a song written by two, heartbroken twenty something-year-old dudes who are cooped up in a cabin together and recently got their hands on a string of Christmas lights and some low dose mushrooms would sound. It also happens to be a true story, more or less.

“A lot of this album is based on letting ourselves expand aesthetically as a band and giving ourselves the arena to just have pure fun,” Kakacek says. But having fun can be hard, especially when you’re surrounded by an unspoken pressure to succeed, as Whitney has been ever since the duo released Light Upon the Lake. Sometimes everything has to collapse, catch fire, or come to a grinding halt before you can allow yourself to want something different. A pandemic can also force your hand, and during lockdown, all Whitney wanted was to dance.

Reflecting on that stretch of the pandemic when it became clear no one was going anywhere for a while, Kakacek says he missed being able to release tension in a “loud, dark place with a driving kick drum.” He wanted to feel that pure rush of energy, the one that washes over him when he’s on a crowded dance floor in Berlin, again. Without access to those experiences, Whitney was forced to “create music that made us feel that way,” right there in the carpeted living room of their old craftsman home. Kakacek cites the cautiously optimistic track “Back Then” as an example of a song they wrote with the dance floor in mind. “It’s the first time we’ve ever really taken Whitney to a dark club at 1:00 AM in the morning.” 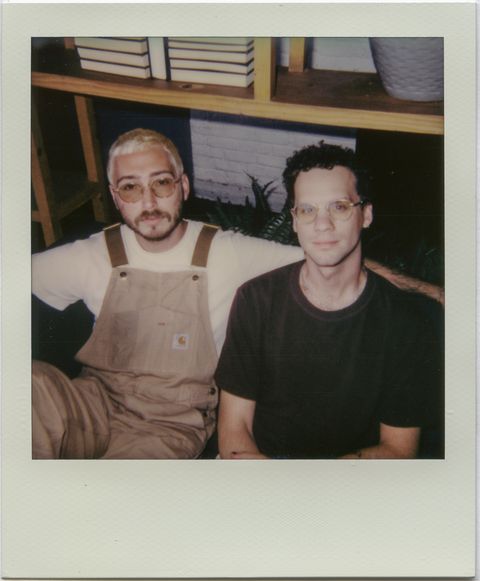 But did they actually dance? That’s what I want to know. “I mean, the whole time we were writing, it was just me and him. No one else was invited,” Ehrlich says, leading me to believe that the answer is no. “But,” he adds, “we were definitely dancing around the room.” Can’t you just picture it? The two, lanky dudes working late into the night in their dimly lit, makeshift studio, feeling giddy, and bouncing around to the beats of the tracks they just laid down. Kakacek credits their chemistry to a “general humility and an ability to laugh off moments that maybe other people would take more seriously.” Ehrlich says it’s because they are so collaborative. “Max and I genuinely lean on each other in order to make something that is so much greater than ourselves.”

One such something is “Twirl,” a hopeful embrace of new love that sounds unlike anything else Whitney has ever recorded. Between the bridge built from a coalescing of barely-there horns and the chorus constructed out of Erlich’s gentle cooing, the song could almost pass a T. Swift ballad. Naturally, it’s about a girl. Ehrlich had fallen in love with someone during the pandemic. “We finished writing it, and I sent it to her,” Ehrlich recalls, sounding shy for the first time in our conversation. He hesitates and searches for what to say next. “It was like a whole … I don’t know. … It worked for sure.”

It worked for sure? Kakacek breaks into a hearty chortle upon hearing his best friend’s response, which signals to Ehrlich that perhaps there’s a better way to phrase whatever it is he’s trying to say. “Not it worked for sure!” Ehrlich says. He’s laughing now too. “I mean, like, the connection deepened. It grew versus …” He trails off, trusting that his best friend understands what he means, and it’s clear Kakacek does.

Ever the romantics, both boys are now in new relationships, and they get moony talking about their new girlfriends. But sitting there staring at the two of them in the late summer sun, watching them take sips from their Tecates almost in tandem, and hearing them occasionally finish each other’s sentences, I can’t help but think this friendship might be the real romance of their lives.

Abigail Covington is a journalist and cultural critic based in Brooklyn, New York but originally from North Carolina, whose work has appeared in Slate, The Nation, Oxford American, and Pitchfork