In House of the Dragon episode 8, Paddy Considine’s King Viserys Targaryen makes a tearful exit but sets in motion crucial events in the Targaryen civil war, known as the Dance of Dragons. Moments before his death, as he discusses the famed Song of Ice and Fire prophecy, he unknowingly further complicates the battle for his succession. While he declared his daughter Princess Rhaenyra Targaryen as his heir years ago, he just accidentally imparted his wife, Alicent Hightower, with intel that could favor their son as heir instead. Let’s break it all down.

What Viserys Said to Alicent

In his last moments, Viserys, in pain and delirious in bed, confuses his wife, Alicent, for his daughter, Rhaenyra. He starts responding to Rhaenyra’s question from the other night, about whether he really believes in the Song of Ice and Fire, a secret prophecy their ancestor Aegon the Conqueror had about the fate of the world. Alicent, who has never heard of this because this sacred knowledge is only reserved for Targaryen heirs, misunderstands Viserys’ words because she’s missing crucial context. She thinks he’s talking about their son Aegon (technically Aegon II) instead.

Here’s the transcript of the scene:

Viserys: I’m sorry. I’m sorry. But you wanted to know if I believe it to be true.

Alicent: Believe what to be true, my king?

Viserys: His Dream. The Song of Ice and Fire. It is true. What he saw in the North. The Prince That Was Promised.

Alicent: I understand, my king.

Viserys thinks he’s reaffirming the prophesy he told Rhaenyra when she was a child, doubling down on his decision to name her his heir. (Hence, “You are the one. You must do this.”) However, Alicent misunderstands this as Viserys changing his mind and admitting that their firstborn, Aegon, should really be his heir. She thinks he means Aegon is The Prince That Was Promised…to sit on the throne and unite the realm.

“It is a bit of a tragic end, but it goes to the idea that this prophecy is a bit of gossamer sliding through your fingers, and it’s hard to grasp all at once,” co-showrunner Ryan Condal said in an Inside the Episode clip. “And also [Viserys’] lack of dealing with the issues at hand at his court that he was responsible for during his life.” 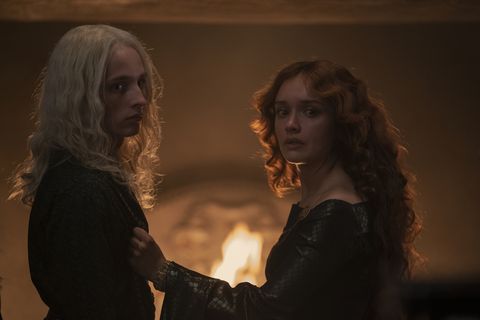 How This Affects the Dance of the Dragons

This could all just be a silly little misunderstanding if Alicent does nothing with the news she just heard, but we know that that doesn’t happen. The queen is fiercely loyal to and protective of her children, after all. In fact, in the trailer for episode 9, Alicent is seen telling someone Viserys’ dying wish: “He told me he wished for Aegon to be king,” which means she may take action to make that happen.

In George R. R. Martin’s book Fire & Blood, on which House of the Dragon is based, a Small Council meeting is called after King Viserys’ death. Alicent’s father, Otto Hightower, Hand of the King, says Viserys and Alicent’s son, Aegon, should be the successor, which sends council members arguing because the king had already named Rhaenyra his heir. When the Master of Coin, Lord Beesbury, objects to denying Rhaenyra the throne, Ser Criston Cole slits his throat, according to one account. This makes it clear that the only acceptable choice for heir is Aegon. Despite his refusal, Aegon is ultimately crowned king, and his sister-wife Helaena named queen. His brother Aemond flies throughout Westeros to rally support from various Great Houses for the Greens, as their side of the civil war would be called.

Upon hearing the news, Rhaenyra goes into labor and gives birth to a stillborn baby girl. She organizes her own council, the Black Council, on Dragonstone. This includes her uncle-husband Daemon, Corlys Velaryon (he lives!), Rhaenys Targaryen, and her oldest sons. With House Velaryon on her side, she has the largest fleet in Westeros to her advantage. She also has several dragons at her command, as Rhaenyra, Daemon, Rhaenys, and three of Rhaenyra’s five children are all dragon riders. And there are even more unclaimed beasts on Dragonstone they use as well. But fire and brute force wouldn’t be enough to defeat the Hightowers and other Targaryens. Rhaenyra sends her sons Jacaerys and Lucerys on dragonback to win the support of Great Houses who are not already loyal to King Aegon.

This is only the beginning when it comes to the domino effects of Viserys’ death and his misinterpreted last words. (Martin’s Fire & Blood is more than 700 pages long, mind you.) If you thought the Targaryen infighting was bad up to this point, you haven’t seen anything yet. 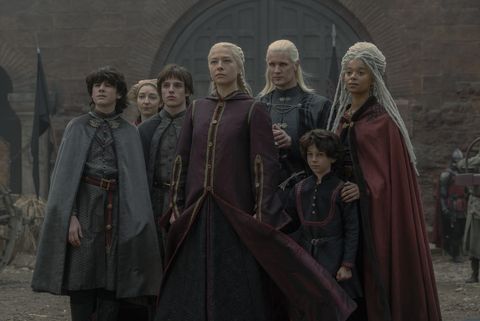 Rhaenyra, Daemon, and their family pictured returning to King’s Landing before Viserys’ death.

The “Song of Ice and Fire” Prophesy

Game of Thrones fans know this phrase well, as it is the name of George R. R. Martin’s expansive book series on which the eponymous show is based. In season 8 of the television adaptation, A Song of Ice and Fire is also the title of the sweeping history Archmaester Ebrose wrote (with the help of Samwell Tarly) about the events following King Robert Baratheon’s death.

House of the Dragon dives deeper into the phrase’s origins. In the premiere episode, Viserys reveals the hallowed knowledge to Rhaenyra for the first time after naming her his heir. He told her:

“Our histories, they tell us that Aegon looked across the Blackwater from Dragonstone and saw a rich land ripe for the capture. But ambition alone is not what drove him to conquest; it was a dream. And just as Daenys foresaw the end of Valyria, Aegon foresaw the end of the world of men. ‘Tis to begin with a terrible winter gusting out from the distant North. Aegon saw absolute darkness riding on those winds. And whatever dwells within will destroy the world of the living. When this Great Winter comes, Rhaenyra, all of Westeros must stand against it. And if the world of men is to survive, a Targaryen must be seated on the Iron Throne. A king or queen, strong enough to unite the realm against the cold and the dark. Aegon called his dream ‘The Song of Ice and Fire.’ This secret has been passed from king to heir since Aegon’s time. Now you must promise to carry it and protect it.”

The terrible winter from the North refers to the return of the White Walkers and the Great War between them and humankind, which was depicted in Game of Thrones.

While Viserys says this, he also clutches at his Valyrian steel catspaw dagger, the same one Arya Stark used to kill the Night King in the Great War. (It’s the same dagger in the story, though the physical prop is different from the one used in GoT, Entertainment Weekly reports.) The prophecy of Aegon’s dream is also engraved onto this blade: “From my blood, come The Prince That Was Promised and his will be the Song of Ice and Fire.” This means he believed that a destined savior would come forth from the Targaryen bloodline.

Game of Thrones ended without a clear, outright declaration of the Prince—or Princess; the term in the High Valyrian language is not gender-specific—That Was Promised, unlike Tyrion Lannister’s naming Bran Stark king. But throughout the series, the top contenders were Jon Snow (real name: Aegon Targaryen) or Daenerys Targaryen. Daenerys sat on the Iron Throne briefly after the White Walkers were defeated but met her end after becoming the Mad Queen. Jon, the more likely choice based on shared qualities with the legendary Azor Ahai, fought the White Walkers with armies across the Seven Kingdoms but did not personally kill the Night King. Perhaps the prophecy wasn’t meant to be fulfilled on exact terms. It’s also possible we’ll get more info to help clear the air as events on House of the Dragon continue to unfold. 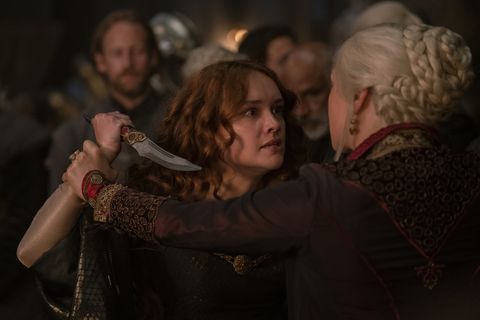 In a romantic final bow, Viserys reaches out and whispers, “My love.” He’s referring to his late wife, Queen Aemma Targaryen, who died in childbirth years ago, implying that he sees her and is reuniting with her in death. While the king will finally rest in peace, he leaves behind a kingdom falling into disarray.