In 2012, Bulgari embarked, under its product creation executive director, Fabrizio Buonamassa Stigliani, on a highly ambitious new mission in watchmaking. The Octo, launched the same year, drew on the design language of the veteran Roman brand’s storied jewelry—specifically a piece from the 1970s piece of jewelry, which, in a nod to classical Roman architecture, married the ancient geometry of the octagon and the circle. But nothing else about the Octo line of watches was classic. Buonamassa Stigliani has presided over one mind-bending Octo watch after another, each one thinner than the last. And the Octo Finissimo Ultra, launched last week in a celebration of ten years of the line, fittingly makes it 8. As the name Ultra suggests, for Bulgari it is the farthest—and at just 1.8mm thick (that’s the whole watch, not the movement), the slimmest any brand has yet gone.

The Octo Finissimo Ultra, like its predecessors, is a super refined dress watch that really thinks it’s a sports watch. And to make it, Bulgari toyed with the conventions of (very) high watchmaking by executing impossibly refined watches in modern sporty materials. The watch is just 1.8mm thick and is made in grade 5 micro-sandblasted titanium. And the ten examples of this watch come with a nosebleed-inducing $440,000 price tag. At Bulgari, thinking against the grain of conventional refinements in high watchmaking, and ditching posh, heavy metals like platinum and gold to make a watch that is both impossibly thin and impossibly light, is a great way to turn heads in the very rarified watch world.

So far, the Octo Finissimo line has earned eight world watchmaking records and in the process garnered a string of awards from the industry including, in 2021, the Grand Prix de l’Horlogerie de Genève’s coveted Aiguille D’Or (for literally the best watch overall in all categories) for the Octo Finissimo Perpetual Calendar. In watches, it is like winning the world cup final 10-0. For Buonamassa Stigliani, however, who is about as nuts about cars as he is about watches, awards are nice things to pick up—confirmation at least that you’re doing something well—but they are not what drives him.

“I’m not obsessed by awards,” he says. “As a designer, I’m very happy that we could win the Grand Prix de l’Horlogerie. In the end it is a confirmation. I’m an industrial designer. I design watches for the customer. If you wear a watch, my job is done. If you don’t wear it, and you just put it in a safe, maybe I missed something. I’m not an artist. I love that someone will use the object that I create.” 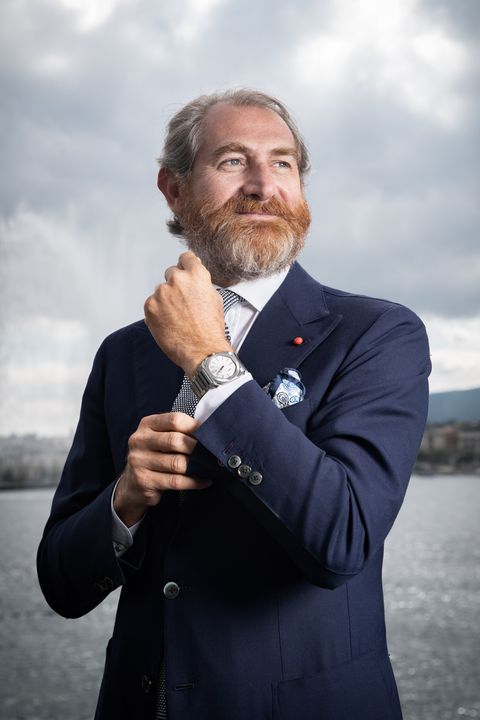 In development, reducing the thickness of the watch to such an extreme degree meant a complete rethink of the architecture of the automatic movement. It required not only re-engineering and refining the parts and creating a unique gear train to connect them all; it also meant scattering the normally overlapping elements of the movement to create a minimalist sandwich. The too-bulky winding stem and the crown had to go, replaced by a cog wheel in plane with the movement and just protruding far enough from the case for you to be able to operate it. Even the case back got a rethink. In conventional watches the case back merely seals off the movement from the elements. Here, to reduce thickness, it is actually the baseplate of the movement itself. And, made in tungsten carbide, it also adds structural rigidity to the wafer-thin case.

“It really looks like a sport watch” says Buonamassa Stigliani. “For us, this was the biggest constraint to change completely the perception in terms of proportion and size. And we needed to be push our watch masters to think in a different way, because to make it work you really have to spread out the parts of the movement.”

Yes, it really is that thin.

The big question now is: where does Bulgari Octo go from here? Where do you go beyond Ultra? Ultra Plus? Buonamassa Stigliani is surely not done yet in his reductive thinking, but the new architecture of the Ultra raised some illuminating new possibilities. The barrel—rarely the most attractive element of a movement—in conventional watches is normally tidied away out of sight. But here, it is—glaringly—the biggest item on the dial. This necessity of design presented an opportunity for Buonamassa Stigliani to carry Bulgari into a new domain, that foggy world of blockchain and NFTs. A unique QR code is etched into each of the ten examples of the Octo Finissimo Ultra. It gives its owner exclusive access to the story of the watch and also a one-off NFT art piece that will be released over the coming months as the watches come to market.

“We put a QR code on this surface,” says Buonamassa Stigliani, “so that the owner can access all the information about his own unique watch. We finished the physical approach: everything made by hand by the master watch makers. And from there, we start a new journey into something that doesn’t exist.”