I’ve been covering Westworld for longer than I can remember. When I think back to my earliest memories, I realize—actually, I’m realizing this right now—that I may have always covered Westworld. Maybe I always will. Today, though? Today is different. On this June, 16, 2022, Westworld released a new trailer. The very first shot of this trailer? It’s a glimpse of the Manhattan skyline, sure. If you look closer, however, you’ll see a certain building. 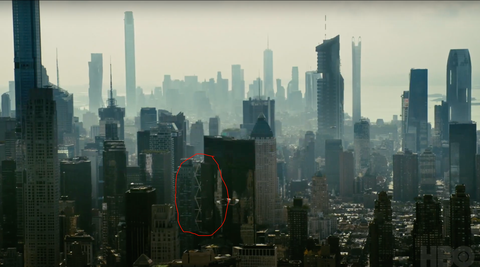 The Hearst Tower in New York City, shown in the new Westworld trailer. Made in Microsoft paint.

It’s where I work. The Hearst Tower. I read this to understand that I—the man whose lot in life was to become a tortured Westworld re-capper—am canon in Westworld now. Westworld, goddamn you. If Westworld is set in the future, does that mean I’m dead? Or did Dolores turn me into a robot and force me to recap Westworld forever? You’ve hurt me enough, Westworld.

Now, if you’ve ever had the misfortune of following along with Esquire’s Westworld coverage, you know that the show is the harbinger of my pandemic nightmares. It once made me spend hours looking at robot gumball brains, wondering who the hell they belonged to, and exists mainly as an alleged television program that has branded the words Rehoboam, Sublime, and The Valley Beyond in my brain with a hot, scorching iron. So yes. There is an official trailer for this new season of television, which you can watch below. But since I am a human being with a job—the qualifications of which require that I write about Westworld—I have just taken the regrettable task of learning everything there is to know about Season Four so far, so I will now share that information with you, reader.

When Will Westworld Return? Or Has It Already Returned and Someone Spilled Coffee on Your Brain Orb?

Unless your preferred method of self-torture is rewatching the episode where Rehoboam monologues for 45 minutes, you, my good friend, have been clean from Westworld for over two years now. Must feel nice. Enjoy it. According to the trailer, the next season will debut on June 26, 2022. Spirit Airlines has great prices for that week, if you’d like to fly to a remote location and bunker down in a cave.

Is It Worth Speculating What’s in Store for Westworld‘s Future?

Well, you know, I’m not sure. Normally, I’d tell you that the Season Three finale actually wrapped things up in a SparkNotable way. The Man in Black is a robot now, Caleb will definitely aid and embed in the murder of all mankind, Dolores Abernathy is dead but will probably return in another form, and my man Bernard went on a vacation to the Sublime.

The trailers seemingly confirm all of this? I think? There’s a ton going on in the new one. First of all, if you want to know what’s up with New Dolores, skip ahead two paragraphs. Otherwise, there seems to be a new park! That’s exciting. Looks like a 1930s mob film come to life, which should be fun for the Westworld crew. Speaking of, it looks like Bernard is in good spirits, happily working his way into the center of the maze. Robot Man in Black eyes up the Sublime. (Or Valley Beyond? Help.) Maeve and Hale look like they’ll come to blows this season. Caleb seems to be in major distress, bugs trying to crawl in his eyes and all.

Moving on. Westworld Season Four’s first trailer, streaming below and set to Lou Reed’s “Perfect Day,” is essentially a highlight reel of Westworld bullshittery. Christina-Not-Dolores is there! And she’s making sinister faces at people. Caleb has his morning coffee, and later, screams violently at the top of his lungs. Bernard is having a great ol’ time in the Sublime, but lies in a pool of his own blood by the end of the trailer. Robot Man in Black is simultaneously murderous and tired of being so murderous. Maeve schemes. I challenge you, dear reader, to open up the “Perfect Day” from Legally Blonde and watch it alongside a muted version of this trailer. Act your age, Christina-Not-Dolores!

Wait! There’s more. At the ATX Festival, Evan Rachel Wood and series co-creator Lisa Joy showed up to say some things that I’m 99 percent sure were intended solely to fuck with me. First of all, they revealed that James Marsden will return. But he might not be the himbo cowboy Teddy anymore. Because Wood, apparently, is an entirely new character: a writer named Christina. And Christina will go on a date with “a man named James Marsden,” according to a Deadline report. Seriously. Read this:

“She’s a normal woman living in a big city just trying to make it as a writer,” Wood said. Nothing ever happens to her, really. I think that’s all I can say… I was told that Dolores was meeting her rather tragic end in Season Three, so I had some convos with [co-creator] Jonathan [Nolan] and Lisa at the time about what that meant. They said, ‘Yeah, you’ll be back this season and you’ll look a lot like Evan Rachel Wood but I’m not me.”

That’s funny, because I look a lot like Brady Langmann, but I’m haven’t been me since I started covering Westworld. Now, let’s kick it over to what the cast and creators have said about the show’s future, including new comments from Bernard himself, Jeffrey Wright:


Jeffrey Wright (Bernard Lowe): “Bernard is still trying to solve it all and he is still very much a part of the struggle,” the Emmy0 and Tony-winner said. “The struggle goes on, and Bernard is right there at the center of it. It’s gonna be fun.” (Will it be fun, Jeffrey? Will it?!)

Thandiwe Newton (Maeve Millay): “I have no idea what they have planned for me. I’m teamed with Tessa [Thompson], I know. Hopefully, we can do some rightful damage.”

Jonathan Nolan (Series Co-Creator): “[The Man in Black] winds up becoming this thing [a host] that he’s controlled for so long… And on a visceral level, I just can’t wait to watch Ed kill everyone.”

Evan Rachel Wood (Christina-Dolores Abernathy): “[Nolan] said that [Dolores] was going to die. He was very blunt about it, and slightly cryptic about other questions I had, but confirmed that yes, the Dolores that we know is gone.”

Will the Next Season of Westworld be Any Less Confusing?