One of the smart things Disney+’s “Hocus Pocus 2” does is go back in time.

The long-awaited sequel starts in a way that recalls the original. Someone is wheeling high over historic Salem, Massachusetts. In the original 1993 film, it was the witch Sarah Sanderson (Sarah Jessica Parker), flying on her broomstick, about to lure away a small child from the girl’s sleepy village. In the new movie, it’s what looks like a gigantic redwing blackbird.

Which is about to turn into . . . Hannah Waddingham, everyone’s favorite football club owner (at least on TV). Although Waddingham’s role is small in “Hocus Pocus 2,” it’s memorable, essential to the film and rooted in lore. Waddingham’s character provides the villain origin story for Sarah, Mary (Kathy Najimy) and Winnie (Better Midler).

Picture Bernadette Peters’ character from Stephen Sondheim’s “Into the Woods” in a Disney film. What if Glinda the Good Witch was actually a bad witch? What if there were no bad witches? What if the line between good and evil is blurry or nonexistent? There in that gray, muddled and glamorous middle lies Waddingham’s character, billed only as “Mother Witch.”

In the new movie, we first meet the Sanderson sisters as children. Winnie’s refusal to marry has gotten them into trouble with the town’s reverend, who banishes her for disobedience and plans for the townsfolk to take the Mary and Sarah and “set them right.” The three sisters escape into the forbidden woods (shortly after apparently inventing gelatin) where the furious adults of their village won’t find them. The villagers are too superstitious to venture into the trees, à la M. Night Shyamalan’s “The Village,” and the sisters go deeper in the woods than they ever have before. It’s at this moment, as they realize they’re in the cold, dark heart of the forest, when Mother Witch makes her memorable entrance. She swoops down from the sky and transforms from a bird into a beautiful woman, velvet cloak swirling.

The “Hocus Pocus” franchise isn’t big on scares. It’s more guffaws than grisly, but Waddingham’s character briefly provides a few nervous moments. She’s intense, her glowing crystal blue eyes, silver hair and long fingernails crossing that line into sexy-scary. That is, until she realizes Winnie isn’t an ordinary child. She smells power on her. She can’t simply eat her. Not her and not her sisters. 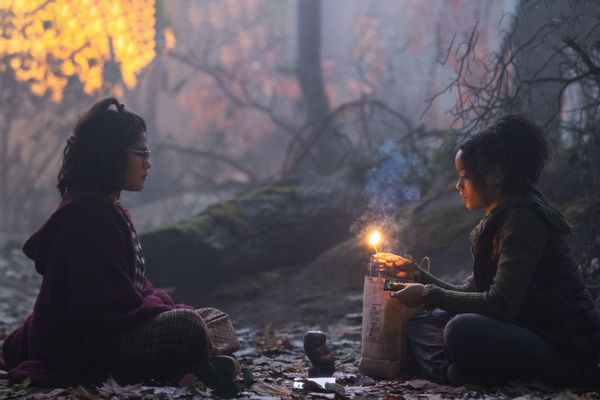 Belissa Escobedo as Izzy and Whitney Peak as Becca in “Hocus Pocus 2” (Photo by Matt Kennedy/Disney)The weird glow leaves Mother Witch’s eyes, and her voice changes to a less saccharine register. She asks plainly why the girls are in “her” woods and realizes the children are different, that they are being pursued. The villagers “were right to fear thee,” she says, and praises Winne for something the girl has likely never been commended about before: her temper.

She’s going to give the girls a lesson on the woods.

Mother Witch then spins (literally, cape swishing like a community theater actor eating the scenery) right into teacher mode. She’s going to give the girls a lesson on the woods, that it’s feared by mere mortals because witches come there to recharge themselves. And Mother Witch swears Salem is a terrible place “only because it is run by fools.” Sounds a lot like Jennifer Barkley giving “Parks and Recreation’s” Leslie Knope a lesson on Pawnee being “run by monsters and morons” . . . and like many people in America watching their hometowns sink under misuse and corruption.

Mother Witch is the fairy godmother of this tale and she’s not letting the girls go empty-handed. Also, it’s Winnie’s 16th birthday, which Mother Witch intuits. She’s going to give the girl a gift. At once and without much deliberation, she produces Book from behind her back. Yes, that Book.

That Mother Witch simply gives the powerful book of spells to the young girl is a sign of the complexity of her character. Does she eat children? Yes. Is she helping these children? Also, yes. Mother Witch certainly sees something of herself in Winnie. She is also marked by loss. She warns the girl not to do the most powerful spell in the book, and hints at its terrible cost (or perhaps, the approaching Salem Witch Trials) when she tells them her coven is gone.

There’s a long, rich history in fairy tales of the woman in the woods. That was always my favorite figure from stories because she was so enigmatic. The definition of ambiguity, the woman in the woods will help you, but at what cost? She gives gifts, but they have hidden prices and you may not be smart or cunning enough to realize that for some time, until the gifts with a catch have worked their darkness in you over a lifetime. Or, in the case of the Sanderson sisters, several lifetimes.

They got into witchcraft to take their power back. Also, to save their own lives.

Mother Witch seems less a trickster than she does a helpful figure (although she’s certainly not sticking around to explain everything — she has kids to eat). She immediately takes a familiar tone with the girls. She addresses them as “we” and says “us.” She refers to them as peers, probably the first-ever time the young girls have been spoken to this way, giving them access to a lineage of powerful women in order to have agency . . .  and in order to escape. Would the villagers have caught up to the girls if Mother Witch had not given them the book? They got into witchcraft to take their power back. Also, to save their own lives.

Want a daily wrap-up of all the news and commentary Salon has to offer? Subscribe to our morning newsletter, Crash Course.

The Sanderson sisters have no mother that we know about. Their father is mentioned several times in the new film. He’s the village apothecary. But their only mother is . . . Mother Witch. “Because I said so,” she reasons after warning them against a certain spell. The mother of their powers. The parent of the book. The source who started it all, whose inheritance is felt in echoes throughout both films.

Moments before Mother Witch’s first and only entrance, young Sarah has been entranced by a song. Sarah, whose later job it is to lure children to her witch sisters, first learns her song here in the woods. And the woman she learns it from is Mother Witch, singing. As the character says, “Magic has a way of uniting things that ought to be together.”